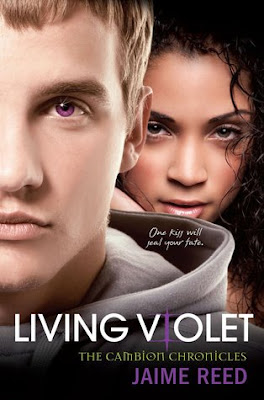 Sam knows what she wants and needs – she needs money for a new car, she has plans to go to college. She studies and she works. She doesn’t have the time or, frankly, the inclination for a hot romance.

Caleb would also rather like to avoid them – but you wouldn’t know it by the women constantly throwing themselves at him. Something that becomes only more sinister as they start dropping around him, unusual victims of heart attacks and worse. Sam seems to be one of the few immune to his allure, but is drawn into his world and its secrets anyway

I love that this is a YA paranormal romance that rewrites so many of the tropes we’ve seen so many times in one long delicious subversion.

We have a magical sexy power that causes the person to literally starve without sex (and other alternatives, but sex is definitely a big one). He needs sexual contact! And his power means nearly all women find him utterly irresistible to a point where the particularly lonely and broken hearted are driven to assault him in desperation.

Which sounds like another recipe for woo-woo justifying sexual coercion and forcing a relationship based on magic rather than genuine connection… but it doesn’t because Sam is immune. Yes, I was shocked too – they bring in a love interest with super sexy magic power then make the protagonist immune to them – completely immune to his coercive sexy magic, unswayed by his magnetism. Not only that but she doesn’t even think he’s all that hot. Oh he’s cute and all, in his way, but super-smoking, she-can’t-stop-thinking-about-him? Nope. Not at all, besides she’s not really in the market for a boyfriend anyway; partly it’s her parents fear of her following in their teenaged-pregnancy footsteps and partly her own disinterest and focus on other things in her life right now. Boys just don’t have to be her priority.

At which point I look at the author and wonder if they’ve got the right genre.

This leaves Sam and Caleb to become a couple through music and spending time together and mutual interests. It means that, while they do fall in love, they do so in a more organic, natural fashion after getting to know each other. There’s even one point when he asks how much she likes him and Sam says:

“You a’ight”
“Sam”
“What do you want me to say? We’ve just started talking” – I check my invisible watch – “a few weeks ago. We’re still in the introductory stage.”

Yes, I want to frame it and hang it in a museum for its sheer rarity. There’s no insta-love, there’s a slowly developed love. There’s no overwhelming, obsessive attraction – it’s just 2 people who get to know each other well and come to love each other.

In terms of plot, well I think this book is more an introduction of the concept, the world and characters. The plot of Sam just learning about this world and slowly growing closer to Caleb is a surprisingly solid plot that holds most of the first half together. It’s not exciting or riveting, but it’s not boring and introduces characters who are interesting enough in their own right to keep the book worth reading. Towards the end the plot of Caleb’s dad is brought in which is just right for that moment – the world and characters have been revealed, it’s time to get some meat on the bones and do something with them; it added both excitement and action as well as a cliffhanger to make the book more than just “and Caleb met Sam”, an ideal addition.

There’s a lot of complexity introduced with this book on a number of issues. Sam addresses and touches upon being mixed race and what that means for her and fitting in with both her dad’s new family as well as with her mother – and racist grandfather. She does it well with the issues melded into the plot rather than there being story breaks for lecture times. It makes the character very real and believable with a strong sense of her origins, race and the life she leads without blatant lampshading or big info-dump breaks.

Similarly, Sam’s mother covers a lot of issues woven into the plot – her loneliness of being a single mother and a woman getting older and starting to panic and resort to more… silly and unwise methods to get a date is interplayed constantly with Sam’s insistence that she’s a beautiful woman who doesn’t need to go to such extremes to try and force a relationship. We have both the insecurities but also Sam’s challenging of those insecurities. Within that, her mother also does a great job of introducing the many dangers women have to face – while at the same time almost parodying herself to keep the tone light, but important. She’s not presented as being silly or outrageous, just zealous.

Even on very complex issues we have a lot of nuance and maturity giving a full idea of some very very awkward feelings. Like Sam’s grief for a dead classmate who died but also was involved in a terrible, unforgiveable crime. There’s a lot of complexity in her reaction – both refusal to forgive what he did or excuse what he did or ignore what he did, but at the same time feeling grief for someone she knew for 16 years and was once friends with.

Unfortunately, there’s also some dubious implications from that – Sam implies (albeit not outright states) that his actions are due to the drugs, which feels a little like a responsibility dodge. There’s also a sense of blaming the victim for being underage at a party where she really shouldn’t have been, the underscoring of that does create some sense of blame on her. However, there’s also a note that she wasn’t the only victim and further emphasis that his victimisation of women was not uncommon or limited turning the focus back on him.

This complex, nuanced, realistic look continues throughout the book – like the way Nadine and Sam both relate to the idea of an incubus or succubus. Yes, it’s not something the host can help or control – and in other books that would translate to an awful lot of woe-is-me whining or complete dismissal of the casualties piling up. Here Sam is sympathetic to that, she knows it’s not directly the fault of the person but at the same time draws a line; whether it’s their fault or not, it is their responsibility to ensure they doesn’t hurt people. Whether that’s learning to fend off their “suitors” or whether that’s working on controlling the spirit. It not being their fault fault doesn’t mean they gets to duck responsibility for it. And if Sam thinks it’s dangerous then she’s gone – she’s not risking her life or the life of others.

We do have some good female characters around Sam with both her mother and Nadine – but they are both unfortunately targeted for victimisation and loss; but women do make up the majority of Sam’s admittedly limited and small social circle and they are diverse in their strengths and outlooks.

There are no GBLT characters and, like most incubus/succubus stories, this is both very heteronormative and gender essentialist. The spirits are passed down male or female lines. So a girl wouldn’t inherit her father’s incubus, because it’s a “male” spirt. Similarly, an incubus’s spirit will only ever attract women because it’s a male spirit.

Overall the book is good. I think it’s slow in places and I could use a little extra world building about the nature of Cambions, what the different cambions are and what else is out there. This is one of those books I have some difficulty in grading because I find myself being rather gleeful about it – it subverts so many of the tropes I’ve come to grow so very very tried of. But at the same time I’m not sure how much of my glee is due to trope subversion and how much of it is based on the actual story itself.

At very least, it’s deeply refreshing and an excellent new take on some very old tropes. It sets up a new series really well and I now have a solid foundation to set me up for the next book which I’m now eager to read.