The Walking Dead Volume 7: The Calm Before 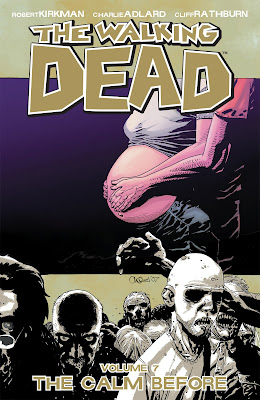 This volume isn’t very heavy on the action. The group settles into peaceful life in the prison. It’s not perfect and there are certainly a couple of dramas that cause ripples - Dale being bitten, Carol’s issues and the need for a supply run, but the focus is peace with some preparation for the possibility of Woodbury attacking.

Lori has her baby Judith, and people are settling in and getting used to living in the prison over several weeks; the gardens are ripening, people have chance to live and reflect.

There are three interlocking themes in this volume. The first is one of peace. This volume covers several weeks and most of that is peaceful. Everyone is enjoying a life of relative safety behind the prison fences, their lives begin to reflect a new secure, stable normality. The garden is ripening, there’s fresh food. Lori has her baby, Judith and there is much rejoicing as they have a perfect, iconic white-picket-fence-family especially with any issues over Shane and Judith’s parentage being firmly dismissed and waved into the past. Glenn and Maggie get married. Carl even moves into his own room and starts playing again. It is a time of peace - not so much perfection, but certainly as good as it gets in the post-apocalyptic world; everything is good, everything is renewed, they have new beginnings, they’ve got through the worst of it and now they can have a wonderful, fresh, joyful new start. A new era. So safe is this era that Maggie and Glenn consider having their own child because it will never be safer than it is right now

The second theme, moving from this, is that it’s a lie. While Judith is born, at the very same moment, Dale has his leg cut off after being bitten and Glenn has his cracked ribs seen to. It’s a wonderful commentary on the world that Judith has been born into; she is born into violence, a fight for survival as Carl says, this is the world that will be normal to her. Even while they enjoy prosperity and supplies, they had to fight and kill for them in a Wal Mart car park - such a contrast to what we would consider safety today (except Black Friday, anyway).

Which brings us to the third theme - naivety to the point of delusion. After being through so much, the group craves this peace. They cling to it and hold on to it even while it is hollow. They celebrate Carl getting his own room while ignoring it’s a prison cell. Maggie and Glenn consider raising a child. Rick stops teaching Carl how to shoot - though we know he still needs to fight to survive. He thinks things are different - but the world hasn’t changed, the zombies haven’t gone away. Dale outright says it - the group grows complacent. Perhaps the biggest symbol of this is Carol’s suicide showing how the peace is just an act, a thin skin over the danger that constantly lurks - whether from Woodbury or from the zombies, they are not safe and they’re kidding themselves.

Beyond these excellently maintained themes there were several issues we have to address as usual.

The first is gender - and we have a surprising uptick (ish). Maggie and Andrea both have input - Andrea decides to blow up the National Guard depot, Maggie decides they need supplies from Wal Mart. Andrea leads an expedition beyond the fences, to get a zombie for Alice - something they decide between them without male authority oking their decision. Andrea is leader and resists challenges to their leadership and is very pro-active; equally while Hershel continues to dominate and dictate to his son, Billy, Maggie is quick and firm in rejecting his dictates - even Hershel acknowledges that, phrasing his criticism as a request and a criticism not an order.

In addition, we saw not just Michonne (the walking silent weapon) but Andrea and Maggie all go out on the expedition for supplies; considering how the books started with unarmed women (or women who dropped their gun) this is a major change. That competence is also reflected with Andrea being chosen as the sniper, Andrea teaching the group how to shoot and Andrea and Michonne being the ones who fought off the Woodbury scouts, not the men with them. Even Alice has taken over from Hershel as their competent medical practicioner; Hershel assists her on the delivery of Judith, not the other way round. Finally Walking Dead has female characters who are asserting themselves, who are competent and who are even allowed in quasi leadership positions (in limited situations). It doesn’t seem like a lot, but it is an amazing turn around considering how women have been treated so far. It’s a shame that despite this progress, Maggie takes wedding vows of sharing her life with Glenn, while Glenn pledges to protect Maggie - doubling down on the whole asking daddy’s permission

Unfortunately while many of the women improve, Michonne continues to be the walking, silent weapon. She barely interacts with any other the other characters, her main and nearly only activity is centred around violence or her sexuality. None of the characters enquire after her health or wellness after what she endured - except Tyreese (why is it only the Black man who cares what the Black woman has endured?) and even then his questions are usually at the worst possible time when she could not possibly talk about her issues (and to be on the safe side, she is written as silent). While others can be comforted - the only way we see Michonne be comforted is by having sex - again sexualising her but not humanising her. Even then Tyreese talks about how having sex with Michonne helps him get over Carol’s death (no wonder she tells him not to talk!)

Michonne’s severe experiences are never addressed or delved into - while we spend a considerable amount of time focusing on Rick and Dale’s more visible traumas.

On the subject of disability, there’s a lot of good scenes of Dale and Rick adapting to their lost limbs. But on top of that goodness, we also see Rick be forced to take an enormously disproportionate step back for his disability. It is a distinct weakening - in this story of so much aggressive masculinity, even effeminising of these two characters as soon as they become disabled. Rick, who used to leave the prison every week near as damn it, now cannot leave because he’s lost a hand - he’s deemed helpless (even more glaring with the prevailing theme of safety that permeates this book - safe, but not for the helpless disabled). Even Dale suddenly feels jealous of Tyreese and assumes Andrea won’t be happy with him because of his age and frailty after he loses his leg - but he had never worried about it to that degree before hand. Even Rick’s authority - which was, admittedly, already diminishing - seems to have shattered far more since losing his hand.

We also have to look at Carol and her suicide. As mentioned above, this is related to exposing the delusion of safety but it’s also something of a comment on mental illness and depression. We know Carol has issues with being alone - she stayed with an abusive husband because of it, she made clumsy passes at Rick and Lori to not be alone and she was devastated and suicidal when Tyreese slept with Michonne. In some ways I like the depiction because it showed that Carol - or most mentally ill people - are not just going to be magically cured of their issues if everyone smiles and pretends its ok; they made no effort to address her issues after she tried to commit suicide - in fact, they distanced themselves which could only exacerbate her problem. Like the skim of normality they were clinging to, Carol’s “cure” was a delusion and it was only a matter of time before it shattered. Even at the end, the group had trouble address Carol’s issues beyond the language of blame - which really does reflect our societal shame with invisible disabilities and, especially, the doubt and shame surrounding those with mental illness.

One last issue is Glenn - why, as he matures, does he become less competent and more naive? Back in issue 1, Glenn rescued Rick from Atlanta - and was experienced in entering the city repeatedly for supplies. Other than Michonne, has any of the other characters faced such hordes of zombies alone, repeatedly? But now Michonne and Rick are expected to protect him - and he decides to confront armed men from Woodbury to ask them to play nice? Why is his character changing so? Even as he is vowing to protect Maggie, he is becoming more emasculated and less capable of doing so and even as he is becoming a quintessential adult, he is acting more and more childlike.