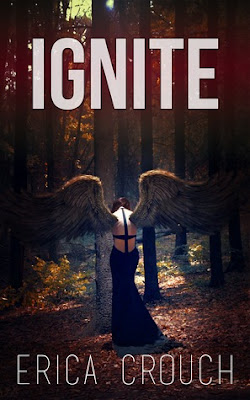 Pen is a demon, a fallen angel, working with her brother Azael, it’s their role to torment and bedevil humanity. To slaughter and reap souls and drag as many of them back to Hell as they can.

It’s a good time to be a demon, Hell’s ranks are expanding all the time and Heaven is in definite retreat. Michael, the leader of Heaven’s angels, is imprisoned and demons can work almost unchecked across Earth. More, Lillith has discovered a new way to spread her plague and turn humans into Lilim, more demon forces to reinforce the might of Hell.

The apocalypse is coming and Hell is sure to win.

But Pen is far from comfortable in her role – and never has been though she keeps on for her brother’s sake. Then she meets the newly reborn Archangel Michael, young and innocent and full of questions – and is given the task to corrupt him however she can. But as much as she turns him from Heaven, he turns her from Hell – together they begin to forge a third choice, even as Armageddon begins.

Firstly I’m going to praise the writing in a peculiar way. Thinking back and even during the book I was making notes that the pacing was pretty poor – nothing seemed to be happening, we weren’t going anywhere, we were kind of walking round in circles and having lots of emotional musings. Objectively, that’s slow. Subjectively, it’s the kind of book that bores me rigid, two characters briefly meeting then examining their navels for an interminable period afterwards. It should have bored me.

It didn’t – this is what tells me the writing was good. Because it can take a style and story that I don’t normally care for and kept me reading it without complaint; I should have been bored and wasn’t sounds like an odd compliment, but it’s a meaningful one

That being said, I wasn’t actually sold on the relationship precisely because not enough time was spent on Penn and Michael together. I didn’t see why Penn was enamoured of Michael or vice versa. I didn’t see what they saw in each other as romantic interests. More, since it was clear from the very first second they set eyes on each other that they were going to be a romance, it made the story predictable.

But it works without the romance. It works if we take an angel and a demon coming together not because they love each other, but because they have a shared philosophy. Both of them realising that they don’t fit in either realms. Both accepting that the cruel, callous horror of Hell is not for them, but nor is the rigid, compassionless, stifling, impossible perfection of Heaven any more suitable – which is just as callous and indifferent as the sadism of Hell. Both are uncaring, both unforgiving, both lacking in compassion, having no tolerance for doubt or questioning or disobedience. The two being united in their mutual appreciation of the scales of grey, of the wonders and beauty of Earth and the creations of humanity – that worked really well as a story and as a concept. This was the story I read and this was the story I enjoyed. In fact, the romance got in the way of what was a really excellent premise.

Seeing Penn grow as a character was also something I liked in the story. I liked her growing acceptance that she just didn’t fit in Hell – just as she realised she didn’t fit in the rigid halls of Heaven either. She grows away from her brother, even as he achieves all his goals and dreams, she realises she doesn’t share them and that her brother can manage without her. She realised that she wasn’t irredeemable, that there was something inside of her that wasn’t tainted by Hell, that she could pull herself back was all a nicely told element I appreciated – except that it was all of this was linked to Michael. They couldn’t have moments of mutual discovery, Michael had to be the light guiding her way, assuring her she was good and worthy, providing her love to hold on to. In fact, when they are separated she starts backsliding to Hell because she doesn’t have Michael so gives up on her growth. I would rather her life have been about her growth rather than her swapping one desperately dependent relationship for another.

There’s a lot of literary references in this book which is something I have complained about in other books – it sounds very pretentious and like the author is showing off their English degree. But it worked here – Pen is, after all, the angel who tried to introduce writing to humanity, who couldn’t accept god leaving them ignorant. That writing is a major part of who she is - in fact, more focus on literature and less on her twu lub for the shining Michael would have been far better

There was also a lot of pop culture references between her and Azael as well as a lot of snark. Normally I appreciate these as grounding a book, and I do like snark, I really do. But these characters are supposed to be angels, therefore thousands of years old. They never really felt it and the snark and references made them feel even younger – and it didn’t help they were in the bodies of teenagers

And there’s not one iota of minority inclusion in this book, which is pretty disappointing.

Frustratingly, I think this book could have been excellent. I think it could have been something genuinely original with some really powerful concepts, a very different story and some excellent character growth and presentation. Instead that beautiful potential was hammered through some very overused romance moulds that it just didn’t fit.