Hungry Ghost (Tales of the Pack #2) by Allison Moon 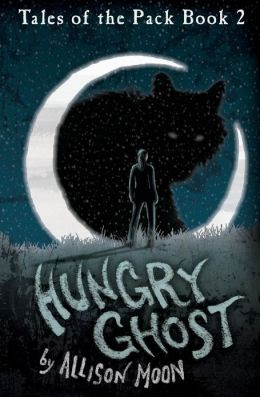 The battle is back on. The Morlocs are still killing and the town is not safe – especially not for women. After the battles of the last book, the pack is re-establishing itself around Renee as Alpha and ready to fight again – but how can they fight when they’re outnumbered and outmatched? Even beyond that, how do they exist as a pack – and as people – without Blythe’s oppressive hands demanding they conform?

And Lexie still needs to find her place – both in the pack and with herself. Unshifting, torn between her mother’s heritage and her werewolfness she can’t run with the pack. But as more and more of her mother’s past becomes clear, she finds a rift opening between her and her father. Then there’s Archer, missing and desperately missed and never far from Lexie’s thoughts.

I get the rough shape of how everything works – the plot, the world et al- but it is only a rough shape and it has gaps and assumptions and things just kind of hanging without me really knowing what is happening, why or what that truly means. I just ended up really uninvested in the story. I only have the vaguest idea of what was going on and I don’t especially care to know more, sadly, because I just haven’t been even slightly pulled in.

I do know how all the characters feel - and it’s certainly a very character driven book. We have a lot of conflict and interaction and resolve between a few characters – the character development is very solid for these few, but it’s also kind of repetitive. I think some of the time could have been better spent on the plot, especially since we had interactions like Lexie and Randy which I’m still not entirely sure what the point was. Or some are there for various lessons or making a point but still don’t add to the overall very weak story (like Duance for example). A lot of the book just feels like character interactions between Lexie and a random other strung together in a row interspaced with her angst. If we were going to focus on character interactions there are still other characters in the pack itself who are sorely in need of work – like Mitch (who can basically be summed up as “transman”).

One thing I like a lot is a lot of the problems Blythe brought in the last book have been addressed and challenged. There’s much less infodumping and Blythe’s whole super-orthodox-feminism-is-like-this-and-you’re-a-bad-feminist-if-you-don’t-obey-me has not only stopped but has been heavily called out as the ridiculous thing it is. It was really refreshing to see all of the pack expanding more into their own lives, pursuing their own tastes and rejecting the strictures that Blythe forced on them as her version of a very narrow view of feminism. Reading this really helps deal with a lot of the problems on feminism in the first book because it helps parse the good messages that were given and the arbitrary restrictions that Blythe imposed; rather than presenting them as one solid chunk.

There’s also a lot of examination of many feminist issues – from a nice skewering of the whole “nice guy” ideal – with Duane told it doesn’t matter what a nice person he is, Lexie just isn’t interested. There’s a lot of talk about safety and the safety many men take for granted while women are constantly expected to be on guard (the point does lack a lot of intersectionality since it completely dismisses that gay/bi men and men of colour rarely feel safe all the time everywhere as presented). There’s a lot of issues that are covered well with a little less of a lecture or, rather, there is a lecture but it fits a bit more organically than previously

The pack are all lesbians, bi/pansexuals or otherwise queer woman except Mitch. While they generally work really well together as very different women yet all coming together in unity and affection, there is a strong implication or outright saying that all of them except Lexie have been raped or sexually assaulted; there’s a really pernicious trope that GBLT people, especially lesbians and bisexual women, are attracted to the same gender because of trauma or other bad experience with the opposite gender that really undermines the sexuality of GBLT people. This is really underlined with Corwin, now recovering from her rape, is becoming interested in men again – and Sharmalee responds that she cannot touch a woman who has been touched by a man because of her own rape. She even presents the fact that Corwin and Sharmalee are together out of shared trauma empathy which seems to completely reduce any actual love, affection and attraction they have for each other to a rejection of men. It’s sad that these wonderfully strong and powerful loving bonds between women had such an unchallenged shadow over them

This book introduced some gay men and… yeah, it was one of those times when I really wish it hadn’t. They’re described as skinny and delicate – in fact “delicate” is used a LOT for these guys. They’re prostitutes (by the look of it, all of them), victimised prostitutes as well (the man buying the services of the gay prostitutes is a sex predator) are presented as pretty pathetic and weak. They actually manage to high five delicately. I’m not even sure how you high five delicately. Is that even possible? Or is this a “limp wrist” jab? They have zero characterisation, they’re blatant camp stereotypes and they’re sex obsessed. And Lexie feels free to order them around and one of them die – he’s not the only death on their side in the battle, but there’s been zero attempt to characterise him as a person, making him seem an utterly disposable tool. It’s one of those depictions that makes me cringe and wish there were no gay men at all; I’ll be honest, I was insulted.

There’s also a supreme love of slurs in this book. And a real insistence that sexual orientation be apparent at first sight – with both the grossly stereotypical depictions of the gay men and Lexie saying things like she “looks straight”.

Mitch is expressly noted as a transman in this book and it’s nice to see him choosing his pronouns rather than others. He does face issues from trying to get his hormone treatment and he does describe really well in places why he is a transman and what it means to him. He faces transphobia not just from the medical services though, but also from the pack – some of it really nasty but it is challenged and fought back so there is a sense of presenting prejudice that actually happens rather than pretending we live in a happy sunny, fun place. The problem is that the challenge doesn’t feel very… vehement. It feels more like “these are two viewpoints, both have valid points” rather than “this woman is dumping a lot of bigotry on this guy and that’s not ok”.

We have a large number of POC in the pack and in general – and they’re pretty free from stereotypes and, perhaps because they had been described in the last book, some of the dubious descriptions. They’re people first and foremost, some have no indication of any cultural markers, but plenty did including a nice side poke on the nature of appropriation. There isn’t a lot of examination of POC issues compared to the feminism discussions but there is a really awkward and horrible comparison made with the humans “colonising” the Morloc’s land which kind of gets all shaky when you remember that the Morlocs are monstrous werewolves raping and killing women.

In all this book is better than the first book but still has some major issues that stopped me enjoying it. I think there’s just too much focus on a very few characters – and too many characters in general – without sufficient foundation on the world or the story. A lot of the problematic elements have been addressed but some still remain. It combines to be better – but still not ideal.

A copy of this book was provided by the author in exchange for a review
Posted by Sparky at 3:00 PM