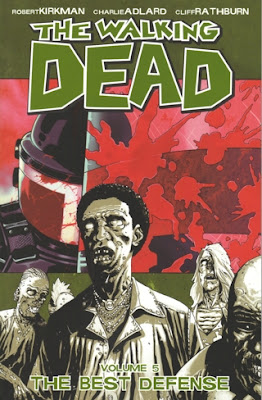 It’s apparent, if not overtly stated, that some time has passed since the dramatic events of the last volume. Rick and Tyreese have settled on a… at least fake friendly relationship; it’s cordial if nothing else. People are getting on, people are getting by. There’s almost a sense of this is what life could be like for them if all goes well. They focus on more mundane issues – like the vegetable garden and with the stress damped down a little they begin to mend some of the rifts pulled open by their damaged psyches. If nothing else goes wrong, you feel this is how they could live forever, managed, calm and as close to peaceful as possible. There’s still ripples – such as Carol’s need to be accepted by Lori and Rick – but they’re not disrupting how they live.

This gives us a great chance to see what they’ve lost – not through moping and regret, but through what they enjoy. The novelty and wonder of the library and having books to read, or the luxury of having electricity, or the anticipation of having fresh vegetables really bring home how little of the trappings we take for granted they have left; even Patricia’s joy in picture books just to see something else, something different. It’s a segment I like a lot.

Then there’s Woodbury which brings with it a lot of reflection on Rick’s previous actions. Yes the Governor is a monster in all sense of the word – but it’s apparent that a monster is something he became and he wasn’t always like that (this is a theme we’ve seen continued in both the special and The Rise of the Govenor). It’s easy to see the Governor’s descent as a warning to Rick of what he could become with his recent mantra of having to kill to live and be ruthless to survive. It equally begs the question of the others asking what they will do to survive – as we see Dr. Stevens serving the Governor despite knowing what a monster he is.

And behind that is a low key threat that was mentioned in passing but stands as a warning to them all – the helicopter from the news station. Their group fell apart and they all died because the people within couldn’t work together and allowed their mutual suspicion and hatred break them apart and kill them all. So another threat is entered – when you and everyone around you requires the group to be united for safety, to what extent is rocking the boat dangerous and perhaps even suicidal? Again, this links back well to Rick and Tyreese’s fight. This need for unity even comes round to the Governor where at least part of his evil activities are to provide “bread and circuses” for the crowds – because he fears that boredom can lead people to start fighting each other.

I really quite like how all these themes and questions circle round and overlap without ever needing to be overtly stated, but continually reinforce each other.

This is the good stuff. Then there’s the bad

Michonne’s rape and torture is both graphic and gratuitous. It’s unnecessary from a plot point of view and a characterisation point of view, it’s just there for grimness. And it can’t be escaped that Michonne is both the only Black woman and one of the few women (perhaps only woman) who is proactive, willing to speak up and has useful combat skills. It felt like she was specially singled out and the whole image of it cannot be divorced from the context of her being the only Black woman there.

And I know there are people there rushing forward to say how necessary and REALISTIC it was to show this and how evil the Governor is. I call shenanigans. This isn’t the TV series Governor who starts all polite and then gets steadily more evil. Within second of meeting him, the Governor has cut off Rick’s hand, he could have beaten and tortured all three of them equally. He feeds people to zombies. He watches them and expresses his admiration for them. He has a wall of zombie heads. Don’t tell me we’d look at this man and say “well he’s not a rapist, I guess he’s a pretty decent fellow.” There reaches a point when it doesn’t  matter how many puppies your bad guy kicks, he’s already reached maximum evil. Extra adds nothing.

Michonne is the glaring issue in this volume, but Glenn is another secondary issue. I mentioned in Volume 4 that there were distinct undertones of the emasculation or infantilisation of Asian men (despite him being shown as sexual which is unusual); this volume seemed to double down on that with Michonne and Rick being expected to look after Glenn when they went to check out the hospital crash. Never mind the fact that it was Glenn who saved Rick in Atlanta and has been scouting and foraging for the group for a while. Why is Glenn the weak link here?

The plus side is that, before Woodbury, Michonne continues to be a vocal participant, challenging limits set on her, trying to be part of the group and help continue to bring about some healing after the big Tyreese/Rick fight. It’s a weak thing to praise, but the contrast is glaring.

Lori is upset about Rick randomly running off and leaving her – again – without any explanation and then spends 2 days worried about him. And again we’re kind of left with the same old trope – Lori has a reasonable complaint, but it’s treated as more of her being an unreasonable, silly, angry woman to be discounted. I also kind of want to remind her and Carol that there’s a zombie apocalypse going on and no-one really cares about their little soap opera.

This comic moved us on to the next big storyline and added to the underlying fear of the real threat in the post-zombie world; zombies may be dangerous but it’s humans doing what they feel they have to to survive – or greedily securing their own power – that are the main threats in this world, far more so than mere shambling monsters