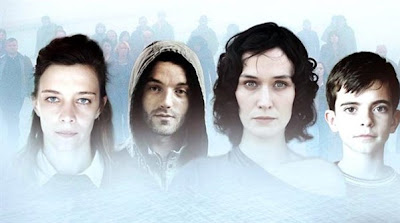 35 years ago, 2 boys, one of them the Creepy Victor, are telling ghost stories before being put to bed. Victor even acts like a real boy and not a creepy creepy killer. But in the night there are several loud bangs – and screaming. Victor hides in the closet and a masked man comes into the room and finds him – but tells Victor to hide, be quiet and not let another man find him. To keep him calm he tells Victor to think of something happy, to sing a song in his head. A song from school. But the second man comes in as the first is talking to Victor – he tries to assure him that a child won’t talk, but the second man shoots Victor. Blood leaks from the closet

And in the present day, Victor wakes up from a nightmare. Where there’s another scream – one of Julie’s neighbours has found the dead, murdered, cat eaten body of Miss Payet – Julie’s annoying neighbour.

At the Séguret household, awkward family life continues and Claire agrees they should move for Camille’s sake – but she’s still not jumping back into a relationship with Jérôme. And the police arrive to take Jérôme for questioning about Lucy – he was… associated with her after all.

Camille doesn’t feel the need to leave – she can keep the Alice ruse up and she knows Léna doesn’t want to. Léna’s more concerned with the scar on her back that has grown massively and nastily – and now seems to be making her weak; she falls down the stairs and Claire calls for an ambulance.

Thomas is busy using police resources and CCTV to stalk Adèle when he now has 2 murder cases on his books – and he’s still regarding Simon as a suspect apparently because of his jealousy.

Simon is staying in Adèle’s attic, harboured by her. When she takes him breakfast he grabs her and starts kissing her and taking off her clothes – he doesn’t listen when she tells him to stop, to wait – until she slaps him. He apologises and eats his breakfast in an incredibly moody fashion; and he has a plan all worked out, they’ll move into the shelter, taking Chloe with them. She is less than eager and he has some moody sniping about Thomas

Thomas finishes his essential stalking to turn up at Miss Payet’s murder with Laure, reporting no sign of a break in and giving Laure a chance to interview Julie. The tension is still very very thick but a light going out in his hiding spot scares Victor, making him remember his murder and he runs out to hug Julie. Laure quickly finds out Victor’s story and thinks Julie has lost her ever loving mind and asks why she didn’t turn him over to the police to try and find his parents – Julie says she doesn’t trust the police. She’s good at turning that knife. Hmmm... given the amount of stabbing on the show that may be a poor choice of idiom.

On the edge of town, Pierre runs into a roadblock that’s been set up to find Simon, gets a call from Claire telling him Léna’s in the hospital and sees a convoy of tankers and lorries presumably related to the rapidly depleting dam water.

He goes to the hospital and Camille talks about the scar on Léna appearing when she returned – she think it’s because of her and Léna agrees. She leaves – and Pierre stops Claire following, going instead to give Camille a not very useful fluffy sermon assuming all is good and kind.

Adèle and Simon get all hot for each other looking at Chloe’s drawings and this time we have mutual passion in kissing and undressing – all watched by Thomas on CCTV. This man has wired his entire house to spy on Adèle?! That’s not creepy at all! And, hello, murders? Remember? A little more important than your fiancée getting it on with her fist love, the father of her child, who is also almost a decade younger than you (does it sound bad when I put it like that?)

Thomas decides to talk to the priest about resurrection. There follows a dance where the priest can’t quite say it’s IMPOSSIBLE because that would be theologically problematic, but also doesn’t want the police captain running around thinking it happens. The vagueness doesn’t satisfy Thomas

And on the “this is so a bad idea” category, Camille decides to hang out with Frédéric. Meanwhile Léna is undergoing tests in the hospital, the only thing she can think of that could have caused it is falling into a chair a year ago at the pub. Must have been one hell of a chair. Claire tries to talk to her but Léna asks her to leave

Perhaps shedding more light on things, Jérôme is being questioned by Bruno and another policeman about his time with Lucy – and how, a year ago, he brought Léna to the hospital with back injuries. He denies hitting her; she fell. He also denies that he was having sex with Lucy, denies that she was a prostitute.

To the lake! Let’s have more ominous rumblings about the lake water dropping, no racks in the dam and the power station flooding. No answers of course.

Chloe returns home to Adèle, still disturbed by the noises in the loft that make her look up – and see a camera in her room. Adèle goes up to see Simon and discuss Thomas spying on them – and Chloé follows the sound of their voices and finds them, getting an introduction to undead daddy. They tell her he’s an angel.

Laure returns to see Julie that night to take Victor to Helping Hands. Julie objects and says she knew she couldn’t trust Laure (ouch) but falls silent when she sees Victor’s latest pictures. Pictures of Miss Payet’s dead body, the wounds on her stomach being eaten by her cats. Aha, Julie, you have seen just how creepy the creepy kid is! Stunned into silence, she just watches as Victor is taken away.

In a stunning lack of any kind of ethics, one of the police tells Pierre about Jérôme being accused of beating Léna and he, in turn, calls and tells Claire. And tells her she has to forgive him – yeah, not so much. Which is when Jérôme arrives home; she asks him if he hit Léna and he doesn’t answer. She kicks him out

Simon is spotted by the police but manages to escape when the power for the whole town goes out, taking out the CCTV

And the lights in the almost deserted Lake Pub where Camille is making Frédéric very nervous with her direct questions and flirting. She also shows she knows that Frédéric slept with Léna during the bus accident. And like then, the twins seem to share feeling, Léna feeling Frédéric’s hand on Camille’s arm. She leaves the hospital and goes to the pub. She confronts Camille and blames the car on her in the middle of the now crowded pub and demands Camille tell everyone who she is. Camille is silent, so Léna tells him the truth. Of course, no-one believes her and as Léna becomes more hysterical – with Camille insisting she is Alice – Frédéric assumes there’s something wrong with Léna who leaves in tears.

Thomas returns home to Adèle and she asks about the cameras – they’ve been there for 2 years. He tries to excuse it by referring to her past suicide attempt, saying he used them if she didn’t answer the phone. She says she’s leaving – and he responds by telling her Simon didn’t really die in a car accident; the priest asked them to say that, he actually died from… I’m going to guess suicide here

Back to the police station and Laure is told that Lucy was a medium (presumably what Jérôme was seeing her about). Speaking to the dead was something she did during sleeping with the men It seems – well that’s one way to try and dodge accusations of prostitution. Laure also gets the Post Mortem results on Miss Payet and calls Julie to confirm Payet wasn’t killed by the man who attacked her. Apparently it was suicide.

Suicide? She stabbed herself a dozen times in the stomach in a suicide? That kind of makes Victor MORE creepy, not less.

Victor is at Helping Hands and, I think, so is Mrs. Costa (I think that’s her). It seems they intend to put him in a dormitory with at least one adult? Yeah social services in this town leaves much to be desired. Pierre tries to cheer him up by telling him to think of something happy, to sing a song in his head, perhaps one from school.

Ooookay, the exact same words as the accomplice of the man who murdered him 35 years ago. Not so good.

At Adèle’s, Chloe draws a picture of Simon – shooting himself. Looks like I was right

Hurting and bleeding from her spine, Léna staggers into the underpass. She collapses and Serge arrives and bends down over her helpless body.

Well, Simon’s cuteness points dropped several notches. I’m relieved that him continuing to molest Adèle when she said “no” didn’t turn into passionate sex because that would have been vomitworthy – but it was a cringeworthy scene. But they both forget that and later arehappy to get all hot and sweaty together; it was passed over easily

To be honest, I’m not keen on Thomas or Simon and Adèle may need to find some hills to flee to. Simon is moody as hell – which is understandable, but he also needs slapping to make a no stick and hasn’t ever asked what Adèle wants. While Thomas is outright stalking Adèle and derailing a virtual serial killer investigation for the sake of keeping Simon away from Adèle rather than talking to her.

I don’t like the depiction of women in general we’ve seen on the show so far; they’re so passive. Léna is afraid and lashing out and needing support and guidance. Julie is a victim, clearly hurting badly and in need of some support and help; Adèle has clearly had problems, is easily lead and has two very controlling men pulling her in different directions. Claire is incredibly passive and constantly looks to Pierre or Jérôme for guidance (this episode showed some determination to protect her daughter – but even that was instigated by Pierre) We also have a pretty large collection of victimised women from the murders. We have Laure, but the most we know about her is her massive guilt about Julie. Ironically, the strongest female character is Camille, the only woman to bluntly say how things are and challenge what is expected of her without it being seen as a symptom of her sad vulnerability. And she’s a teenager, little more than a child.

There’s a lot of characters here which means for a lot of storylines.  More, I don’t think we’re getting any answers to these storylines – we’re constantly raising more and more questions.