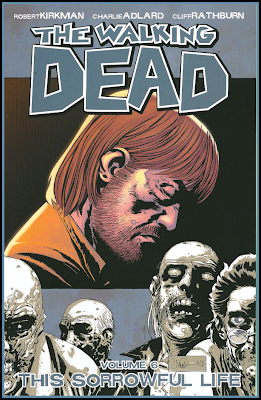 This volume Rick, Glenn and Michonne escape from the Governor’s clutches with the help of Dr. Stevens, Alice and Martinez who can no longer tolerate the Governor’s brutality. And Michonne, after her savage torture and rape, extracts her own revenge on the Governor that haunts her

Returning to the prison, they find it overrun by zombies and have to fight to reclaim and re-secure it. But the Governor is still out there and they know one day they will have to fight him.

The dominant theme for this volume is a very clear “what will you do to stay safe?” Coupled with “what do these choices do to you?” The most blatant example of this is, of course, the Governor. The brutality he has resorted to, his complete lack of any kind of limits to see Woodbury and his people thrive - whether that’s killing and torturing perceived threats - or running brutal arenas to keep the crowd amused and placated so boredom can’t turn into revolt. And, of course, we see what these brutal decisions have done to the Governor, turning him into a sadistic, raping monster. What he did to survive and what that did to his morality and limits are really clear.

But while he is the most obvious, the theme continues beyond the Governor with a populace who find their own excuses for tolerating the Governor’s abuses. Sometimes it’s fear of what he will do - or it’s the Doctor and Alice’s justification that the people of Woodbury need them. Or Martinez focusing on the innocent people of Woodbury need protecting. Or simply the residents looking the other way and not seeing how bad it is - like the woman in the arena crowd outraged that her “good clean fun” was so ruined by Michonne killing her opponent. Each of these has made their own decisions on how to stay safe - to stay safe they tolerate evil, justify evil or hide from evil done in their name. In turn it has had an effect on them of inuring them to that evil - the town of Woodbury continues to watch the arenas considering the brutal violence to be clean fun, the guards know what the Governor is doing and participate in his atrocities.

Of course, the main group is not immune either - with everyone tolerating Rick’s violence as necessity even when they condemn it. And as to cost - Michonne is a clear example in this book with her being shocked and worried by what she did to the Governor and questioning herself. And Rick has become so inured to loss and so willing to do what needs to be done that he no longer sees his fellows as people to preserve - he doesn’t feel sad about death or loss any more.

While these themes are both fascinating and incredibly powerful and really well done in this book, it also had some really glaring problems, again, with the marginalised characters

Especially, Michonne. Most particularly how the others treat her after she is freed from the Governor and after she got her revenge. They all know she was tortured, if not how, they can see the evidence on her face if nothing else. Yet Glenn is the only one who asks how she is - until they get back to the prison and Tyreese (it’s notable that only the 2 other POC express concern). Rick never asks how she is, being more concerned with what she has done to the Governor and whether she has dealt with that problem. This is only made more glaring when he does ask how Alice is after the death of the doctor. By all means, commiserate with Alice even with death being as commonplace as it is, but he has known Michonne far longer, owes her far and Michonne has suffered to an exponential degree more than Alice - but only Alice gets his sympathy? Michonne is the emotionless, tough weapon, especially compared to the delicate white woman

It’s also hard to see Tyreese express regret for how he messed things up with Carol without any real contact with Michonne. After what happened to her, it’s hard not to see him as discarding her as damaged goods.

And while I don’t exactly want to see Glenn tortured, the fact that the Governor pretty much ignored him speaks of contempt and belittlement. Why not question him? It’s not even worth trying? Why was Glenn dismissed?

We do have some introduction of Latinos with Woodbury - both the Governor and Martinez. This, unfortunately, makes them both enemies of the main group (even if Martinez had a point). Also the writers seem to forget Martinez’s name for one issue and call him Rodriguez instead. Did they just use a random hispanic name generator?

On to another perennial complaint with the comics - the treatment of the women. firstly, with the exception of Michonne (who is very glaringly fitting the trope of the Unwoman), women, again, are not filling any major roles in this book. Woodbury’s leadership is entirely male, even Alice is secondary to Doctor Stevens. Maggie, Andrea, Lori, Patricia and Carol all stayed at the prison and pretty much did nothing (except worry, as is Lori’s wont, until she decided that Rick will always come back so she doesn’t need to. This is much the extent of what she did all volume).

This constant presentation of passive and secondary womanhood made Glenn asking Hershel for permission to marry his daughter even more appalling. Women are already too controlled and dominated by the men in this series without reducing Maggie to her father’s property.

Finally we have to consider Rick and disability after losing his hand. That is a major loss and it will definitely impair him; there are definitely accommodations he will need and I’m glad Tyreese pointed that out. But there seemed to be an exaggerated sense of how impairing this would be in combat. It was good to acknowledge he would need to change things but it exaggerated his helplessness. Contrast that with how the one handed Merle was treated in the TV series.

It is, however, a rare surprise to find a physically disabled character in an action role - usually they’re in support or secondary roles away from the front lines, disabled is considered inept or incapable or helpless in most media.