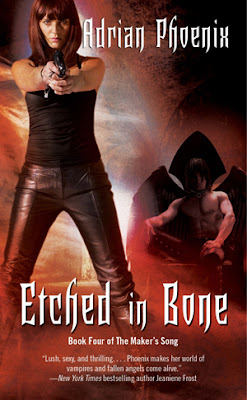 Dante has managed to wrest Lucien free from Gehenna and from the control of the Fallen – albeit while growing a set of wings in the process. But he is far from free of them as they demand a promise from him to return while they plot about how best to control him.

Things are not calmer on Earth as more and more of his enemies – a variety of rogue FBI and Shadow Branch Agents – manoeuver to find a way to bring him down or turn him into a tool. All the while he is still trying to control his broken mind, suffering from flashbacks, seizures and agonising pain.

But he has no time to heal – the local vampire boss, Mauvais has killed someone they care about and must be made to pay while the vampire factions also look to tie their own puppet strings on Dante.

Even Heather’s father is in town, with his own plans to ruin what life they’re trying to build.

There is a problem when it comes to reviewing series. The problem is that an author is (usually) unlikely to massively change their style. They’ll probably grow and change as a writer as the series progresses, but the fundamental nature of their writing usually remains somewhat the same.

And so, here I am reading book 4 of the Maker’s Song series and, guess what? The same issues that have dogged the other books are still there. I’m sure you’re all shocked to hear that.

The characters are moving together and pairing off when their agendas are close – so we have Gillespie and Rutgers working together, we have Emmet and Merri joining the main gang, Underwood being derailed – a few of the lines are coming together or being snipped. Excellent

But more are being introduced – we now have another faction entirely, seeming to be pissed off, mind controlling Teodoro Dion (another new character, yay!) who really really hates the Fallen and is going to hurt Dante because that’ll show ‘em all! And then there’s Heather and Annie’s father who is running around with his own perverse ideas of putting their family back together again.

I have to say, again, that none of these storylines are bad.

The FBI/Shadow Branch tracking down Dante and torn between killing him, imprisoning him or monitoring him with the odd rogue agent along the side? It’s a great story and the characters are fascinating and really work well.

The Angels with their plotting for control and who gets to put the leash on Dante? Excellent storyline.

The vampire factions – both local and the grand global councils and circles all vying to see who can attach their strings to Dante? Great! I love this story.

But put them all together and then throw in Heather’s father, some more random rogue agents and Dion on an apparent revenge kick backed with Underwood’s quest to kill her daughter-in-law for killing her son, then there’s Von in trouble for being a naughty Ilygad –he’s supposed to be an independent observer and reporter and is now in trouble… and there’s far too much going on. The sheer number of characters, storylines and plots means, even with them all being pretty decent in isolation, that none of them can really advance in any real, meaningful way. The whole book covers 3 days of activities because we have to see what everyone is doing, everywhere .

It doesn’t help that it’s also terribly long winded. In the first book I called the writing gloriously gothic – and it was. But that gothic feeling has been eroded by the sheer number of people and the larger scale of the book. without that theme, it just feels repetitive. Dante’s beautiful, we get it. Heather’s worried about him. Various figures are angsting. We have a lot of descriptiveness, a lot of attempts to set the scene which involves overly long depictions of eating dinner or feeding pigeons or describing what people are wearing. Drop in some Cajun French, some Spanish, some Italian and some random-not!Welsh Elohim words and it’s a long long read. And we have a fair amount of recapping squeezed in there as well with extra bonus of Dante’s loose grasp of reality and constant flashbacks.

It further doesn’t help that the storylines that emerge as dominant – Heather’s father, Mauvais, the local vampire boss having a tantrum – are the ones that are probably the least important in the grand scheme of the series. The major players are still dancing around the periphery of the storyline while we’re concentrating on the elements that are probably the most skippable. Apart from anything else, they’re the elements that don’t know a thing about Dante’s powers so are only 2 minutes away from him having an unfortunate flashback and turning them into goo or merging them into a holy-chanting-chimera-thing (again).

So I’m left in the same place as I was in the previous books. I love the storyline. I actually like all the storylines. But everything is stuck on pause because there are so many storylines and characters that we have one, massive, snarled traffic jam of storylines jostling for position – and for some reason a couple of little vespas have broke out to the front of the pack and we’re following them while the big truck of interesting and vital story remains stuck in traffic. And that traffic analogy got a little convoluted in the end there.

One benefit of all of the endless piling up repetitiveness is that there is a lot of good character interaction, a lot of real characters who have good storylines and good backgrounds. There is definitely a realness to the characters, each one has history, each one has personality, each one has their own goals and agendas and a true sense of them being a full person

I just wish they’d get out the damn way.

The large cast means there are some minorities – though, thinking about how large the cast is, there probably aren’t as many as there should be. On POC we have Merri (a vampire former SB agent who was a slave when a human who brings her experiences with her in her characterisation), Gillespie (rogue SB agent with some arch observations about being caught with a gun), Underwood (a big boss in the Shadow Branch), one of the Elohim council (which I respect because far too often we will see various magical folk as being all white and diversity being there for the humans only) and some members of Dante’s band. All of which are Black. And all of which are pretty minor, background characters. The man characters – Dante, Von, Heather, Annie, Lucien – even most of the more prominent minor characters and main antagonists are White.

Which brings us to sexuality – Dante continues to kiss everyone – including his father – and Von talks about getting him male blood donors, not female for the sake of Heather’s jealousy. His potential bisexuality is dead in the water – it would help if the book, like so many others, weren’t actually allergic to any overt mention of a GBLT label.

Emmet, Merri’s partner, is gay and has a family that he misses. One of the Elohim is definitely attracted to men – but he’s an incubus and sex obsessed and had to forced to focus on the matter at hand rather than Dante’s good looks; this doesn’t bode well give the series’ past of gay sex predators. We had a random side character pop in to give Dante some information who was probably gay or bi – in that he was very attracted to Dante. It could have been Dante’s supernatural good looks which everyone goes on about for chapters at a time but I don’t think so. Again, allergy to the labels doesn’t help – and it’s another teeny tiny side character.

The female characters on the whole seem good. There’s no creepy sexualisation or fetishizing, Heather is an excellent character who is capable without being super woman, resists being shuffled into a corner and protected and is determined that she has made her own choice resisting bother her father’s attempts to change that and Dante’s own desire to send her away to protect her. She is Dante’s rock – but it’s more than being an emotional support, she is brave and dedicated and passionate and generally a good character. We have a plethora of other characters all with their own passions, plans, agendas and skills – and a lot of female authority figures including Underwood, Rutgers and Renata. As well as Merri, Caterina several member of the Fallen high council and other capable women besides.

And then there’s Annie. The mentally ill character who is a constant liability as I complained about in the last book. Well, she’s still a liability, causing problems and general being a complete burden to the rest of the group.

My frustration for this series grows while my patience fades. It still has excellent elements. It still has awesome elements. It has a good story, it has an excellent, imaginative truly unique world and it has some really great characters that feel real and human and powerful and fascinating. There’s real chemistry between them and some truly wonderful passion on the page. I want this world, I want to see more stories in this world, I want to see more of these characters. They’re characters I can get truly angry about them being screwed over and truly righteous about them winning

But it is all derailed and crashing by the horrendous bloat, the ridiculous number of characters and the absurdly excess number of story snippets all competing for attention. Too many side issues, too little focus on a main plot and the whole thing is just far too slow. Maybe with some of the characters coming together it is getting better – but not nearly fast enough.