In the Blood (Maker's Song #2) by Adrian Phoenix) 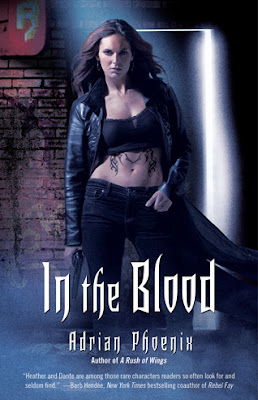 After the events of the last book, the powers that be are seeking to tie up loose ends and cover up Bad Seed and make sure no-one ever knows what happens. Which means people have to be silenced – which puts Dante and Heather in a very dangerous situation with some powerful forces hunting them.

In addition, the whole events, including the dramatic death of the Bad Seed agents at Dante’s hands has brought Dante to the attention of Dr. Wells, the initial founder of Bad Seed. He has plans for Dante – as does his brilliant son – and both have the tools to manipulate Dante’s shattered mind and pull him into their web.

Then there’s the Elohim; Lucien has done his best to hide Dante from his fellows, but his song is being heard and he cannot hide much longer.

This book avoided, to an extent, the main problem I had with the first book. Of course, that’s rather to be expected – my problem was the first book being too full, with too much world building and new weird words and too many characters and too many agendas made the whole book far too full and confusing and rushed. I didn’t know where I was or what everyone was doing or even what everyone was – it took a lot of back tracking and notes and head scratching to finally get everyone in the right place.

Now with all of these characters established, the world resolved and everything set, we didn’t have to face that… except I wrote “to an extent” up there – because while the world building was already set, we still had the shifting POVs, the 10 squillion unnecessary characters and the million unnecessary agendas. We had:

Then there was the Shadow Branch of the government (miscellaneous nefarious folk). Their agenda is to kill everyone to cover up Bad Seed and everything that happened in the last book

Rutgers is the boss of the more conventional FBI who wants to kill a different set of people from the Shadow Branch because… I’m not even sure. Spite, I think.

Dr. Wells is a nefarious scientist who started Bad Seed and wants to use Dante to his own nefarious ends

Alex is Dr. Wells son and wants to use Dante for his own nefarious ends – which are different from his dad’s.

Athena has her own agenda which is completely random and incomprehensible

Heather’s father is manipulating Annie into… I have no idea. Something.

Lucien wants to protect Dante from his fellows

Lillith wants her daughter back

Gabriel has his own agenda

And Lucifer has a separate one.

ENOUGH! That’s a ridiculous number of characters and agendas to pack into one book. At very least trim out Rutgers or one of the angels or something! There was a moment when an assassin was pointing his gun at Von and I had no idea who he was trying to kill or why because there was so much going on.

The language was also repetitive – Dante is supernaturally beautiful. We get it. He’s yummy. Moving on. Yes, he’s angsty – we know this, can we not revisit it every 5 seconds?

Ok that’s a lengthly complaint but the problem is that the complaint is lengthly – but my overall impression of the book is good. It’s always hard to write a review where my criticism takes a long time to explain but my praise is brief – even if my praise is stronger than my criticism.

I do like Heather, she’s an excellent character who manages to have a great deal of strength and determination despite being faced with so many forces that can crush her. I like that she is sympathetic and troubled but not given to long angsty monologues – while her pain and sadness – over her mother, her father, Dante, her sister – are all plain to see. I like that she can be scared – she doesn’t have to be a fearless super woman or a sobbing wreck and I love her dedication to her job and why she does her job – to be a voice for the dead, for the victims, and how much that means for her. I love her conflict, her nagging doubts about what she’s doing and Dante once she’s stepped outside of the law and structure she knows – she’s not willing to just

The world with its intersecting stories may be full and shaky and overdone, but it’s also dramatic and rich with lots of hints of more beyond what we’ve seen. From the nomads to magic, to the angels and Gehenna  and the very nature of the Creator. I love it’s take on angels and the way that spins into legends of god and creator beings. Now we’re seeing a real sense of vampirekind as well, just hinted at because it doesn’t form a major part of the story, but enough for another level of richness to be available when it is needed. I just hope it will hold off until it is needed and not just splurge like the last 2 books have.

While we are often distracted, the story does largely work – the plot is exciting, the action very well done, the whole scene described without any bloat to cut through the fast paced action. The story itself involves a lot of good decisions from the main characters, including glorious moments  like Dante being offered everything he could want on a platter, but being smart enough to see through it and not fall for it.

All of these storylines are tight, interesting and involved (except Rutgers, I have no idea why she’s there). They’re a little overwritten and the gothic theme that went with that in the last book isn’t there so it’s not a good overwritten – but each story works. There’s just too many of them.

There are also a couple of incidents where the story feels forced – either by Annie’s random actions or even by a bewildering decision – like Von deciding to leave Dante and Heather alone and return to New Orleans, despite the threats arrayed against them.

There are a lot of liability women in this book that isn’t very comfortable. Heather has her mentally ill sister, Annie, who is hostile, a liability, full of spunky agency, does ridiculous things that screw them over and then, when trying to redeem herself, screws up and causes problems again.

Alex has his sister Athena, unstable, unmanageable, violent, constantly needing to be managed and his Achilles heel because he cares so much about this dangerous, delusional woman.

Lillith has her unknown daughter, held hostage that has apparently directed her agenda and her having to deal with Gabriel and Lucifer for as long as she has.

Half the cast seems to have an inconvenient woman messing up their lives for them and providing a source of weakness, manipulation or outright sabotage.

On the plus side, this is countered by a lot of strong, capable women on both the good and bad side of the equation. Unfortunately, strong and capable (as in “dangerous” and “fighters”) tends to be the extent of many of the other female characters – including assassin Caterina and FBI honcho Rutgers. But all I know about them, beyond the fact that they’re dangerous and ruthless, is that Caterina’s mother is a vampire and she follows her orders and example. I don’t know anything about Rutgers other than her job and willingness to kill people to tie up loose ends.

We see more about Lillith, but, again that somewhat revolves around her being Lucien’s ex, about her worries for her daughter and dodging around Gabriel and Lucifer’s agenda because of that

I would love to see another female character who is as complex, driven, intelligent, determined and caring as Heather is – not just lethal and not a liability. A friend would be good, a figure like Von – can I hope for Caterina in the next book?

Relatedly, we do have a number of disabled people in this book. I’ve listed them all above – in the liability list. Which is unfortunate. We do get some interesting passages from their POV that fleshes out their motivations and the way their minds are working and is actually pretty well done. But all of them are framed through the lens of what a burden/trouble/threat they are to other people, a constant source of worry and even torment and oh what trouble they cause. Annie and Athena are both out of control and violent as well. To add to that, while Dante’s mind has been deliberately messed with by people trying to turn him into a sociopath, his experience is faintly analogous to or related to mental illness – and part of the way that manifests is by him being dangerous and hurting people even while not meaning to. It’s better done with him and more the wilful actions of others, but it’s still there

The more I read into the second book, the less sure I am that Dante is bisexual. Again Heather underlines that Dante uses kisses as a random greeting, a handshake between people he’s close to and it seems to have little regard to his sexuality. Which is an interesting point to explore and it’s definitely nice to see a different cultural take on gestures of affection. Of course, if we assume the kissing is not about sexuality then the sexual interest we have seen from Dante has been directed at women – which leaves no overt GBLT characters in this book. And in the last book it leaves us with 3 gay or bisexual male villains – sexually predatory ones at that. If we continue to get more downplaying of Dante being actually attracted to the people he kisses, to his kisses being just a platonic gesture then that will make the first book really awful with its depiction of GBLT people – the prime love interest being bisexual was the only thing pulling it back from the edge.

As for POC – I’m still not sure about Von. For some reason I get the impression he is, but skimming through again and again I can’t find any confirmation either way. 2 of Dante’s three bandmates are definitely POC but they don’t play a large part and are, for reasons I’ve ranted about, shipped back to New Orleans pretty early.

In the end this book is one of very high highs and very low lows. There are elements of it I love – the world, the story and many of the characters – but it is pinned down with such a lot of bloat, repetition and a sore need of these excess storylines and characters being trimmed that it stops the book becoming them truly excellent story it could be.