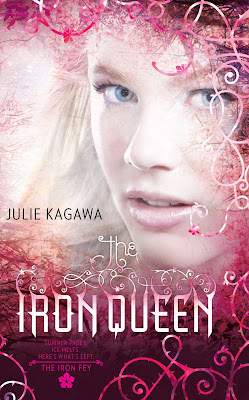 Ash and Meghan have been banished from the Summer and Winter courts due to their illicit love. They are free to go to the human world, free to live with Meghan’s family again – except the Iron fae are still interested in her and she can’t bring their conflict to her parent’s home.

The only place to turn is the Queen of the Exiles, the Leanansidhe – and Meghan’s own mission to save her father

But the Iron fae haven’t gone away, led by a false king, they launch their armies against the beleaguered forces of Summer and Winter. Meghan may be their only hope.

I already love the world building but I further love how it is developed in this book – new insights introduced, new angles to consider. The nature of Iron glamour. What oaths mean to the fae who cannot lie. What releasing a fae from a promise means in their culture. The power of a true name. What happens to mortals trapped in faerie land. The very nature of the Iron fae and the way they fascinatingly contrast with the old fae – the old fae are timeless and immortal and eternal, while the Iron fae fully expect to be replaced over and over again because they become obsolete. With that comes the very nature of the Iron King’s power passing to the next worthy candidate – the next upgrade.

This insight also applies to the characters, their motivations and roles – removing many of the obvious villains and casting both Ferrum and Mechania in a very different light. There’s the added complexity that, while the Iron fae are destroying the Nevernever, if they weren’t on the offensive the Old bloods would probably kill them as well – the two sides are inherently damaging to each other.

There’s some old gems as well – Grimalkin is always shiny (even if, for once, she managed to confuse him), effortlessly perfect and amazingly snarky. And I do like Puck – and his unconventional magic that is a nice shift from the more direct attacks that Ash throws.

The story itself was fun and adventurous. The fight scenes were exciting, the descriptions never got in the way of the story expanding the theme and the characters while still keeping everyone largely on task (I do think there was something of a lul while they stayed with the Leanansidhe) – but it wasn’t exactly unpredictable. You could sort of see how the book would end just as it began.

The title fits the theme and all that – but it’s also a bit of a solid giveaway of how this book ends. I can’t say it ruined it because I think it was fairly clear where we were heading and it was definitely a fun ride anyway, but I still feel the need to object to a spoiler in the title on sheer principle.

As is very common with books about supernatural creatures and the fae in particular, there are no POC in this book. In fact, with Ironhorse’s death, there aren’t even any dark skinned fae (and I’d not exactly be eager to consider that as representation anyway – even aside from the fact he was an animal). There are also no GBLT people. I don’t approve of erasure in any book – it’s never a good or acceptable thing – but as casts get larger and series get longer, erasure becomes more and more blatant and worsens the problem. We’re on book 3 now.

I like Meghan as a character on many levels. While she has the super special woo-woo, that isn’t apparent for much of the book. But she’s still the leader, she’s still considered important because of her past accomplishments (and due to the desperation of the Summer King and Winter Queen). This is a wonderful combination of her both being a leader, the one everyone looks to for help and the one expected to save the day and decide how that should be done, but also she is accorded this respect due to what she achieved in the past and her familiarity with iron glamour and the iron realm as well as her immunity to its affects. So she’s a leader – but for a reason, not because she’s a super-special snowflake wearing the protagonist badge – and she has a useful power that makes very valuable without making her The Most Special Shiny Person Evah with the God Powers of the Universe. She nicely plays with all of the tropes without succumbing to anyone.

Add to that some decent decision making, a level of maturity that is neither perfect nor irritating and she has, largely, left behind the awful romance tropes of the last book. She’s also nicely conflicted in her choice on whether to save the fae or stay with her estranged father – she has a personal goal vs a selfless goal and, really, it’s not like she owes the fae anything. I like that she is conflicted and not instantly stepping forward to be the self-sacrificing hero. She also starts to learn to fight and seek her own strength and protection rather than relying on Ash; though I do think she learns awfully quickly.

What I like less is that she is surrounded by men – Puck, Ash, Grimalkin. It’s her father she saves from faerie and spends time rehabilitating, while her mother is hardly present. The fae monarch she’s closest to is the Summer King. Even among the Iron fae her contact is male. The women we see are largely capricious and cruel even when helpful (Leanansidhe) or petty and spiteful (Titania) or distant and menacing (Mab – though Mab is thawing a little which I have some hope for).

The romance also continues and I still don’t care for it, though this time the annoyances lie more with Ash than her (and Puck – and, really, the whole “he had 16 years in which to make his intentions known” is hella creepy considering Meghan is 16 years old. This centuries old being has watched her from being a newborn and is now in love with her only-legal-in-some-places-self? Uckies. Lots of uckies). Ash is protective in the “zomg how dare you take risks in a war zone!” way. He pouts. He mopes. He does both while actually in enemy territory and when they’re on a mission.

And that’s aside from the fact I still think their relationship is horrendously fast-tracked especially with Ash swearing his life away to Meghan.

This series started intriguing with a lot of positives, then the second book was just a little shaky for me. I still gave it 3 fangs because of the concepts and the world that I loved but it was shakier and the romance was pretty ghastly. I think this book picked it up a little more, the story was tighter and the epic was clearer and the world and characters came through excellently – and the romance was, perhaps a little less exacerbating. This book, this series, is great fun, with a fascinating world and some great characters – but the stories follow pretty old patterns and, while fun, are predictable from the beginning and there’s a doozy of a bad romance in the middle.