Death and the Crimson Night (Night Series #1) by Marie Hall 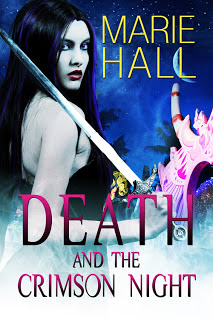 Pandora  is a 5,000 year old Nephilim, a person whose daddy was an angel who did things he shouldn’t with a mortal woman. Along with some powers and a long life span, this also comes with a demon resting inside of her – Lust. And Lust must be placated and fed. It’s quite annoying.

But she gets by, she and her small group of Nephilim, trying to the best people that demons can be. Not a little encouraged by mortals who monitor and police the supernatural

But things are getting odd, vampires (nasty, demon created things) are swarming in surprising numbers for creatures near extinct; a Nephilim hunter bothers Pandora but seems disinclined to hunt, and powers unlike anything she’s seen in 5,000 years are involved.

This book was a perfect first book right until the very end. The characters were excellently introduced along with a little information about each of them to give an idea of them without having to derail the main introduction, while at the same time giving a little bit of world building with each one. So we know things like Luc and Pandora’s past that colours their relationship without having to spend a long time on the backstory – while at the same time telling us about Nephilim losing control and going feral. We have a little information about Bubba while at the same time telling us about some of the awful things Nephilim are forced to do for their demons, how they, as a group, try to remain good. We have a little background on Vyxyn and how she doesn’t get on with Pandora – telling us that the group is somewhat forced together and leading nicely in to the Order of Light, the war and the policing of supernaturals.

It’s a really elegant way of including a lot of backstory, interspaced with Pandora’s internal musings and recaps that are very lightly info-dumped, to get a maximum amount of world building, character development and backstory in place with minimal info-dumping and making the whole plot run smoothly.

The plot itself is excellently paced – enough mystery and revelation, enough character development sprinkled with bits of action; shadows of a love triangle but it never developed into one and Pandora firmly in control of what she will and will not tolerate even with various forces pushing against her. It was a fun read with a lot of unknowns – unknowns that continue to be unknown at the end of the book as well – to leave me hooked in for the next book coupled with a whole lot of ominous foreshadowing and some excellently balanced description keeping everything vivid, but moving. We have a really nicely new world – the Nephilim are children of angels (who fell for being naughty and lusting) with their own vice demons possessing them. I like how it links vampires, zombies and other miscellaneous supernaturals back to this original Nephilim presence – creating a very potentially diverse world but still keeping the backstory focused and relevant.

The story balance all falls apart towards the end. We’ve spent all this time setting up the world – and it’s an interesting world. I kind of know what’s going on, we have an adventure, we have a plot that looks pretty good though, I thought, pretty predictable. I was set in to enjoy it – it was fun, it had original elements but wasn’t breaking the mould too much.

And then TWIST! The oh-so-obvious bad guy I was being all smug about recognising as the bad guy wasn’t a bad guy at all! I’d totally been red herringed with tropes – because he wasn’t even set up as a bad guy, it was just obvious to anyone who has read this genre for this long that he clearly would be! Damn that was clever. I applaud. And someone who wasn’t even on my radar as a potential bad guy was actually the evil one after all. I applaud twice

Then she descends to hell and there’s mini demons and pestilence and a mega-arch-demon who is uber-hot despite being Wrath (and really, why would Wrath be hot?) and possible angels and conspiracies and… what just happened?!

I was busy applauding the very very very clever twists and then I’m in complete knots about where we end up. I’m fascinated about where we go from here – but there’s a difference between a twist ending and one that is poorly supported by the rest of the book. More development and foreshadowing is needed.

Our protagonist, Pandora, is a Nephilim which, in this setting, means she has a demon inside her. The demons correspond with the classic 7 deadly sins and Pandora’s sin is lust. This means she has to have sex, the demon inside her compels her to seek out sexual partners and gives her the tools to seduce anyone.

I always find these stories shaky because we usually see a lot of blurring of consent with them – of people using their super sexy powers to enthral lovers and this being presented as ok. In this case there was some dancing around the lines but not nearly as bad as I have seen elsewhere. One of the primary powers of those with lust demons is being able to transform themselves to look like their target’s physical ideal – rather than coercing lust with magic and enthralling them, Pandora simply looks like her chosen prey’s ideal lover which is seduction enough and keeps consent. She also talks about other Nephilim using their powers to rape people by violating their consent but adds expressly how she refuses to do so. We have that emphasis that she does respect consent, she has a line that she does not cross.

Yet when she sees Billy she seems to try to enthral him. She throws her allure at him beyond shapeshifting (in fact, I don’t think she does shapeshift to seduce him) and is both frustrated and outraged that he didn’t respond and managed to resist her. There’s a grey there since it’s not clear whether she was trying to magically force attraction or was just outraged that someone as sexy as she was turned down.

She does use supernatural thrall to enrapture people elsewhere in the book – but she doesn’t do it for sex and doesn’t have sex with them.

It does raise the question of her own consent, however which leads to some in depth characterisation that leaves me thinking. Obviously Pandora is driven to have sex with men when she doesn’t want to and men she’s not attracted to for the sake of placating lust.  We even have a depiction of one of these scenes where the sex is awful and quite unpleasant – it’s an interesting contrast to the many incubus/succubus stories out there where all their partners are hot and all the sex is awesome. If you have to have sex, it’s not always going to be good. We also have Pandora hating that her powers force her to become a “slut”, which I naturally don’t like because of the slutshaming and derision of female sexuality. Yet her definition seems to be off from what we commonly see – her seeking out sex with sexual partners she likes or finds attractive – Billy, Luc, etc – don’t seem to be what she means; when she says “slut” she seems to mean sex with men she doesn’t want that is forced upon her – the aforementioned unpleasant scene, having sex with a vampire and killing him. I’m not entirely sure because it’s open to interpretation, but it feels slightly more like frustration of the sex life forced upon her rather than attacking herself for having any sex life at all. As to the sex – she isn’t outraged or traumatised by being forced to have sex by her powers – she is frustrated and annoyed, as she has been dealing with it for 5,000 years. It’s very open to interpretation.

There is a scene I love where Pandora turns into a voluptuous, larger woman to fit someone’s fantasies and is outraged that he tries to hide her from his friends, that he tries to treat her as a shameful dirty secret. Her fury over how he must have been treating other women and breaking their hearts is perfect – as is her insistence that she publicly kiss him around his friends.

Diversitywise, we have a passing mention of some gay men going into a club – not names or characters, just noting that there were men who would cause her to shapeshift into a man, not actual characters. They’re background non-characters. We had one demon that had assumed the form of an Asian girl and one cringe worthy scene where Pandora turns into a Black woman to fit one man’s attraction – basically feeding his fetish. There are few times when this can be anything but gross, but given the overall erasure of the book, it feels like rubbing salt in the wound.

I think Pandora is a complicated character in many ways and certainly a character with a lot of agency and determination who doesn’t succumb to emotional pressure and firmly holds onto her own moral rules. She’s conflicted, about a lot of things including the things her power drives her to do. I like her as a character. What I don’t like is that every other woman in the book turns out to be devious or hostile or both. It always slightly saddens me to see an awesome female character vexed and bedevilled by every other woman in the book.

I finished this book slightly confused, but equally eager for more. This world is rich and the characters are intriguing with some very original features and plot lines that are designed to pull me in and keep me following. All of it is held together with some tight, well balanced writing that widens the world and keeps the story moving forward. There are some shaky issues that concern me, but this is definitely a series I want to follow and would recommend as worth a try.