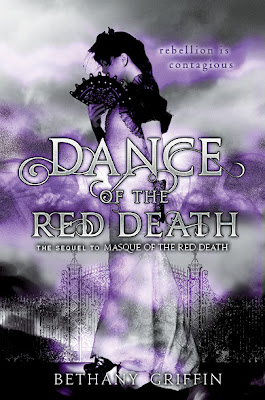 Araby has managed to escape the city with her friends, giving her chance to absorb some terrible truths:

Her father is a murderer, her father created the plagues.

She can barely accept it, even reading his own journal and needs to hear it from his own mouth. Which means returning to the city – to hear from him and to find a cure for April as well, rapidly succumbing to the Weeping Sickness.

And while they’re there it may be their last chance to save the city – a city ravaged by plagues, swamps and the duelling forces of Prospero and Malcontent.

Elliot launches on a really excellent campaign this book. It’s his chance to take back the city and save it from the dual abuses of Malcontent and Prospero – his father and his uncle. He has his army, but will it be enough against Prospero’s and Malcontent’s own forces? Or the city itself? Ravaged by 2 horrendous plagues, the water unsafe to drink, the air unsafe to breathe. Slowly sinking into the swamp, ravaged by divisive factions, falling apart through anger and fear. Services have stopped, getting food into the city is becoming harder and roads are blocked by the piles of bodies.

It’s an epic task he has – but he has a plan, reclaiming a neighbourhood and expanding, creating a safe space, disposing of the bodies. He is the man to save the city and he is perfectly placed to do so.

And he’s not the protagonist.

We’re following Araby. Awwww… do I have to? But but Elliot is the hero!

In the face of these epic happenings Araby is… spending pages on pages worrying if she really loves Elliot. Or wondering if she loves Will after his betrayal – and his continuing activities for that matter. Or she is worried/hurt about her father and the terrible revelations that show that he is far from the hero she suspected. Or she is worried about April or the children or some of her other companions.

And it’s not like any of these issues are wrong. She has been betrayed by Will, her whole relationship with Elliot is a complicated one. And April is her often unappreciated best friend who is now plague ridden – of course she is worried about her and the children in such dangerous places and circumstances. All of her emotions are legitimate. But they’re also repetitive, really really, repetitive and handled at great length. I could, possibly, get past that if we didn’t have Elliot running around actually doing something – and not just doing something, but doing something for the whole city that makes Araby look very… small in comparison.

Sometimes I like her checks on Elliot, her reminding of him of all people, her compassion breaks through his ruthlessness and her holding on to their group reminds us and Elliot of priorities beyond the city – that there are actually people there, that the diseased are not the enemy, that there are lines that cannot be crossed – and that April is sick and needs help.

Which would be great – if she were equally involved in the big picture stuff as well. And if she didn’t devote so many thoughts to the Elliot and Will love triangle with breaks for daddy issues. But because she’s, at best, incidental in the main plot (she tags along with Elliot basically pushing him to look for her father) it makes her look very small picture – and very insular – in her views. If she had just been more active in the bigger picture she would look more like the conscience check she needed to be.

About half way through she gets more involved – but it’s almost incidental and poorly thought out. She rescues a load of orphans – but only because she thought it was a great idea to head out with a small child and a sick woman who is inclined to faint armed only with a small gun with 2 shots – and luckily found only 1 guard. She gets involved in Prospero’s palace because she’s kidnapped. She knows where the rings are because she’s kidnapped (admittedly showing some sense in recognising her own expendability compared to people actually doing stuff or capable of doing stuff to save the city).

And Propero’s palace? Kind of lost me, though I may have been zoning out. But it was a long line of look-how-evil-Prospero is (we know) and then she’s playing games with him and then everyone turns up in a slightly odd fashion (for a sealed palace he has really crappy security) and then his army just disappears because he starts cowering in a corner – and I’m not entirely sure how we all got from A to D, nor am I sure if B and C were involved anywhere in the journey  but a lot of this was down to me being just a little fed up by this point in the book, if I’m honest

And the ending? Am I supposed to buy into this whole “Elliot may become a tyrant!” thing? Because he is the beloved leader who just rescued them all while Will pouted in a corner and Araby moped in the opposite corner and incidentally did some good from sheer random chance as much as anything. The whole election thing looks particularly dubious – Will insists they need them to protect the people from their saviour (who he spent the entire book pouting about) and schedules them for 2 weeks. Seriously – 2 weeks? A regular food supply hasn’t even been established, you’re not even sure the plague is gone and securing clean water is a must (oh hey, lookit the stuff Elliot is doing!) but you want election campaigns? Uh-huh, guess who I’d vote for?

I don’t think the ending was best paced anyway, but it could be my own evaporating patience. It ended – and then we had a couple of chapters with Malcontent and the pump tapped on the end – I think they could have been better saved for another book or just taken as done; there wasn’t enough there for an actual story. And the story had ended anyway – we didn’t need some extra crocodile wrestling when the ending had already been nicely set up.

In terms of marginalised issues – well we have zero minorities again and this with a pretty large cast of characters. As for women – April spends most of the time fainting and struggling and Araby has moments of excellence but they are drown in moments of angst and issues while Elliot actually gets on with things. She made decisions that didn’t make a lot of sense or, when they did, either happened through pure chance or where brave decisions based on her own utter expendibility. It was only really once she reached the palace that we saw some decent drive from her. But a special shout out has to go to Araby’s mother – kidnapped, a hostage with almost no power yet still fighting as well as she can to the very best of her ability to save people and rescue people.

We do touch on class in that the wealthy people are seeking shelter from the carnage in the city, but it’s a lot less involved than in the first book – especially since even the rich people running are jumping from the frying pan and into the fire.

And am I supposed to be on Araby’s side over her father? Because I completely agree with Elliot. For that matter - I have no idea why Araby is so important? Why did Prospero even remotely care about her again? Enough to have a whole party for her?

In the end this is a great world and a great concept. The theme of darkness, grittiness, loss and pain are really well maintained. The horror of the plagues and the sheer desperation of the city really come through and are hammered home. This is desperate, hopeless, horrifying and truly bleak and that permeates a lot of the background.

Unfortunately the foreground is some very repetitive angst, a lot of repetitive moping and a lot of repetitive boyfriend or daddy issues. Which are repeated. At length.  They actual story has to squeeze in between this – and most of that is driven by another character entirely and one I’m apparently supposed to view with suspicion. It drowns the good stuff and left me eager to finish the book and be done with it.