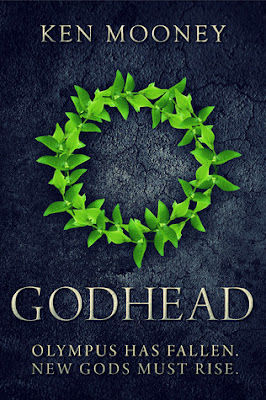 Back in the mists of history, the gods of Olympus fought against the demonic forces of Kaos. And they lost because one of their number, Aphrodite, turned against them.

With gods dead and facing utter destruction, Hera launched a last, desperate plan; sealing off Olympus and the tree, the source of their powers and with it sealing the demons away from the world and humanity.

Aphrodite is still active in the world, her schemes stopped only by the human descendants of the Olympians. Which is where Megan, newly grieving for her dead grandfather, and Karl come in – learning a lot about their ancestry, their abilities – and a sudden, high risk duty.

Greek gods! Demigods! Epic battles between the Olympians and the forces of Kaos! Demons, a rogue Aphrodite! Lots and lots of Greek mythology sprinkled around!

This book was almost designed for me. Throw in some human descendants developing super powers and discovering what they are and a big epic battle to save the world all coupled with a well realised and developed antagonist? Excellent idea, you’ve hooked me in; this concept will have me begging for more.

Unfortunately, the writing is very very slow – this is a long book that could have been a lot shorter. It was a shame because it opened extremely strong. The scenes of the ancient world, the history of Aphrodite and the Greek gods, what happened and what the consequences were were awesomely done. I actually want to read that book – just the war between the gods and the demons would be excellent. Not only do we have the prologue but the book is intercut with more snippets of the past from Aphrodite’s point of view. All the scenes are excellent and really do a lot to flesh out and develop Aphrodite as a villain – giving some motives behind her destruction.

Really, the whole ancient world would have been an excellent series of books in their own right.

But having them cut in randomly from half way in the book felt more confusing to me than anything. Because the actual present being depicted was moving so slowly, these sudden flashbacks – to the ancient world, to Hannah and Unity when they were younger, to Meghan’s grandfather’s journal, while all considerably better than the main plot line, served to bog it down a lot, make the book longer than it had to be and make it all a little jarring. Sometimes I just didn’t have any idea what was going on or why.

And there’s a problem in that with all this backstory I actually felt like the protagonists took a back seat. We saw far more of Hannah and Unity than we saw of Megan and Karl. Especially Karl – Megan we saw her family connections and her own personal grief over what Aphrodite and Deimos have done to her. She becomes more involved – or at least more invested – and is more present during the flashbacks as well. Karl gets one flashback that’s more to truly establish the fact he’s gay than to add him to the story, his power is also the one that is the most low key. Even the decision of where to go, who to trust and what to do rests a lot more with Megan than with Karl, who spends most of the book following, hanging around in the background or – his most prominent role – being victimised by Aphrodite and then rescued.

There’s also a fair few background characters introduced that fill things up – but many of them are just names. I would have liked to have seen more development across the board – who is descended from which god? What powers do they have? Why? Who are they? At least a thumbnail sketch of the background characters and a whole lot more on Megan and Karl – especially Megan. Quinn could have used some work as well.

There just isn’t much to the main story – and it shows compared to the backstory. We have a couple of characters discovering they’re special, a very brief, aborted training scene and then Hannah and Aphrodite’s show down. It felt a little like Karl and Megan were superfluous to the story – and I think they’re supposed to be the protagonists. The only reason the book managed to hold up at all was because of the constant flashbacks to the much more involved backstory.

Diversitywise, we have a gay man – Karl – but I’ve already mentioned the flaws of his character; “gay” and a graphic designer may be the limits of what we know about him as a person because he was sorely underdeveloped. Some of the background demi-gods are POC, but they don’t spend a lot of time on screen as it were, nor do they end well.

We have some excellent female characters holding different roles extremely well. Aphrodite is a well rounded villain – and one who isn’t evil because of her sexual wiles which, considering she’s Aphrodite – is rare. Hannah has some decent complexity – but Unity is definitely one with more depth and interest. Megan has some wonderful willpower and determination and is one who had me cheering when she refused to play their games while still grieving for her grandfather and her mother added her own competence and fun scenes.

I liked the book and will probably read the sequel – especially the way the story ended which made this book far more of an introduction than a main story in itself. But the book is sorely in need of some decent character development and a good, well designed set up story. At the moment it has a truly excellent backstory, with a phenomenally well designed antogaonist and a pretty decent main character in Hannah. But the actual story is flimsy, hollow and has a couple of pseudoprotagonists who are more placeholders than actual characters.