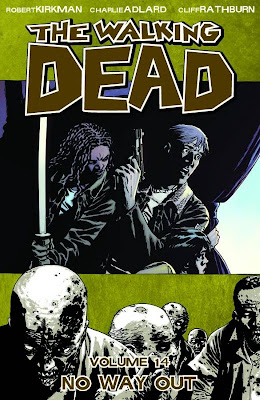 This volume was an action packed comic with the near destruction of Alexandria at the hands of a zombie herd and Rick & co rallying Alexandria to its defence and ultimately saving the settlement.

We saw three themes develop this week, each leading into the other. Firstly, we had the overt acknowledgement of what had become clear in the last volume - Alexandria’s safety is an illusion. They are not safe. Douglas mourned this, but Carl is actually happy that their safety was compromised, so that the people of Alexandria can wake up to the reality around them.

Which arises in the next theme - the herd hits, Alexandria isn’t safe and people die. But not only do people die, it becomes clear that the safety of Alexandria has left the Alexandrians ignorant, weak and even liabilities. Andrea ducks among Roamers while Spencer flinches from them. Douglas nearly kills Carl - and all of them - by firing a gun randomly into a pack of Roamers. Holly balks at killing the bitten Bruce and Ron and Jessie freeze in a pack of Roamers. The safety of Alexandria left them grossly unprepared for the reality they were living in.

The third theme was one of hope - and the first real hope we’ve seen in the series. Rick is convinced, in the aftermath, that they can stand and hold Alexandria - that the dead are not a major threat and they can hold them off; he has a lot of ideas on how to make it happen. But, more subtly, this arises out of that last battle - where Rick and Michonne’s heroic, awesome fight, joined by Abraham, inspires many others to fight - including usually non-combatants like Eugene and Gabriel.

Rick speaks of this as a new way of thinking - standing and fighting rather than running and hiding from the zombies, but it is a new way of thinking that has only arisen because they’re in a larger group AND because the “civilians” stepped up. Throughout the series, the group has had a number of non-combatants, many of which could have fought (including most of the women but also including people like Hershel and, to a lesser extent, Dale) who stood behind the fighters. This becomes especially meaningful next to the “rookie mistakes” made by the ignorant Alexandrians - the message was clear, the non-combatants are a burden and they need combat experience for the group to prosper. It will be interesting to see how this develops - if Rick’s revelation is seen as a change of thinking, using numbers effectively or recognising that non-combatants cannot be liabilities seeking shelter without good reason.

In terms of problematic issues we have a few:

Michonne is one of the most popular characters in this series and therefore we have been paying very close attention to her portrayal. Like all of the central characters Michonne has been through a lot but she is the only one who not only lost the people she loved, but was brutally raped. I have been waiting a long time for Michonne to show some sort of emotion beyond rage. When Morgan continued to talk about his dead wife and child, Michonne called him selfish and pointed out that he is alive and that his family is dead. By virtue of them being alive they should just move on and forget the past. It should be impossible even with the daily grind of survival for someone like Michonne to simply move on. When we did finally see some emotion from Michonne, it was about the death of Morgan. The sadness and mourning were a refreshing change but I could not help but wonder when she was going to actively mourn for herself. I don’t think that they are going to give Michonne this opportunity because when she is not being angry, she is a stoic cardboard cut out. These two roles which she has been slotted into are both racist and sexist.

In terms of gender I find Maggie to be the second most problematic character. Now that her relationship with Glenn has solidified to the point that they are functioning as a family unit, all of her independence has disappeared. In many ways she has become the second coming of Lori (something the story really did not need), in that all she seems to want to do is nag Glenn into oblivion. It is understandable that given her living situation she would be nervous but the degree to which has been domesticated, has removed all of her agency to the point that she is a shadow of who she used to be. When everyone was out fighting, Maggie was hiding in the house. When Glenn wanted to help clear away the dead bodies after the group had killed off the horde, Maggie wanted Glenn to stay in the house with her.

This volume Jessie died. We were first introduced to Jessie when Rick intervened because she was being beaten by her husband. We didn’t learn a lot about her, beyond the fact that she is a survivor of intimate partner violence. The writers decided instead of spending time developing her character, to take a short cut by having her sleep with Rick. When she died, we viewed her only through the lens of Rick’s pain. This is clearly a writing device, however; in a volume in which women were largely very absent during action scenes, nagging their spouses, and refusing to show emotion, it seems to follow a trend of not investing in female characters. They are side characters who only seem to exist to advance the male characters and this is a problem, especially considering the gender problems the comics have had in the past.

This comic we saw Aaron and Eric kiss - it was real, heartfelt and gave a true sense of them as a couple - it was also the first overt confirmation of them as a gay couple; making them definitely the first GBLT characters in the series since the hot mess at the prison. Our hope now is that they are distinguished as characters - the expanded cast upon reaching Alexandria has caused there to be a number of background names in the comics for the first time; as the only GBLT characters we want Aaron and Eric to be more than that.

For the first time, a volume ended with a sense of hope and purpose - rather than reaction and security - it will be interesting to see where it goes from here.