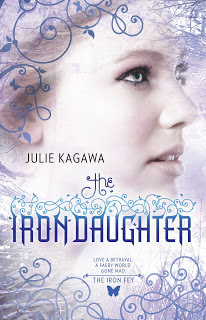 Meghan begins her stay in the Winter Court, hostage to the Unseelie Queen, Mab, and seemingly friendless, especially as Prince Ash turns cold towards her in the unforgiving environment of Tir Na Nog.

But The Iron Fey have not stopped their plotting just because their king is dead. A new monarch has arisen and he has sent his agents to steal the Sceptre of the Seasons, the powerful artefact passed between the courts to signify their changing power – and the changing seasons. Mab instantly accuses the Summer court and the two great courts of faerie march to war – leaving them vulnerable to the Iron fae’s attack

Only Ash and Meghan know who truly took the sceptre – and no-one believes them. It’s down to them to find the sceptre and save the fae. And the world – because while the sceptre is out of the court’s hands, the weather will rage out of control.

I said in the review of the last book that, while I found the romance and budding love triangle annoying and fast tracked, they were properly second to the main plot and while they were a little irritating, they were ignorable.

Which is why, when this book started there was a moment when I nearly put the book down and refused to pick it up again.

They’re heading to Tir Na Nog and Ash reminds Meghan that any display of fluffy emotion will mean that Mab & co will see it as weakness and promptly exploit it to the doom of them both. We even get a vast copy and paste from The Winter Passage to drive the point home. So when we get Meghan in the same room as Mab and Ash?

Meghan: *soulful puppy eyes at Ash*
Ash: uh… hide emotions… remember
Meghan: love me Ash! Love me! ZOMG WHY ARE YOU NOT LOVING ME!?
Ash:… y’know, Mab is RIGHT THERE watching us
Evil prince: Hey human-princess I loathe and despise – want to eat this totally innocent apple?
Meghan: Fairy food in fairy land offered by an obvious enemy? WHY THAT SOUNDS DELICIOUS! Clearly there can be no catch to this
Ash: Meghan…
Meghan: And IIIIIIIIIIIIIIIIIIIIIIIIIIIIIIIIIIIIIIIIIIIIIIIIIIIIII WILL ALWAYS LOOOOOOOOOOOOOVE YOU!!!!!!!!!
Ash: *sigh* Of course we do not love each other, that is only banned by all our laws and would get us both banished or executed *hint hint* so no, I don’t love you. *icey angry eyes*
Meghan: ICY EYES! Zomg he hates and despises me! It was all a lie! He clearly isn’t acting and he must totally mean he hates me! Oh woe is me! WOOOOOE! WOE!!!!!!

Ash: Come Meghan we must go!
Meghan: NO! You hate and despise me!
Ash: uh – secret remember? Showing emotion is weakness? We did explain all this – did you hit your head or something?
Meghan: NOOOO! Clearly you only pretended to be in love with me and it was all a trick to get me to Tir Na Nog!
Ash: Yes, that makes sense. You had no power, no magic and can’t fight – I could have dragged you to Tir Na Nog by your hair if I wanted to. Why would I even bother to trick you?
Meghan: You did it all to mess with my head and break my heart like you do to mortal girls!
Ash: Yes, I went to a land that poisoned me with its very air, burned me with acid rain and nearly killed me so I could screw with some girl’s head. That makes perfect sense.

Sadly, while Meghan’s lines are a heavily paraphrased version of her position, Ash did not respond with that snark, but he really should have. From here we move to Robin telling Meghan he loves her – this would be the same Robin who has watched her since she was a baby to her current age of 16 but for some reason absolutely no-one thinks that’s severely creepy. And Ash catches them in a semi-compromising position and huffs off to more angst and drama.

Which leaves me wondering what happened? Did someone slap a CW label on the book or something?

Thankfully, after Ash slopes off, the romance stops clogging the gears and we return to the same kind of story that made The Iron King such a good book. We have an excellent story with lots of action which is really well written and exciting. We have the rich world that draws heavily from a lot of research of different fae myths (and non-fae myths at that) brought together really smoothly that really draws me in. While at the same time there’s that excellent balance of description – just enough to give everything its full worth, but not so much that we feel like we’re being pulled on a guided tour of faerie land. Throughout the story rarely loses its sense of epic – of grand forces in balance and dire consequences awaiting failure – and I’ve got a soft spot for epic.

The Iron fae are truly original and I love how they’re developed and truly do carry the essence of both technology AND being fae. Which is really hard to pull off – but this book really makes it clear that while the Iron fae are antithetical to the Seelie and Unseelie fae, they are still fae. They still think and act like fae and still, in many ways, are governed by the same rules as the fae – just flipped for their new iron glamour.

There’s also some wonderful complexity laid out there – we see Unseelie fae joining the Iron fae because they see no choice, they see it as their possible salvation. I love how subtly this is done – not just by having the traitor far declare how hopeless everything is, but also little hints from the characters as well. Last book, Grim and Puck talked about the Nevernever dying as humans turn away from dreams and towards science and iron. In this book we’re introduced to areas of the world that the fae have outright written off and never go. Puck seems to have completely accepted the inevitable decline and extinction of the fae. This added a whole load of nuance to their depiction – traitors? Yes. Foolish? Yes. But also desperate – and faced with a very slim choice or inevitable destruction.

We also see some interesting class parallels raised within the fae with the half breed. We constantly hear of fae seducing mortals and see Meghan as an obvious result. But even Meghan faces contempt for being a half-breed and she has the insulation of being Oberon’s daughter (even if it also makes her a target, it makes her valued and due at least quasi-respect). But we see the Leanansidhe and the half-breeds being considered lucky to be sheltered by her – even though she treats them as slaves and can’t be bothered to learn their names. Again, them working with the Iron fae seems foolish, but when the status quo is so stacked against them, why wouldn’t they embrace whatever change becomes available?

These threads of nuance really add some depth and realness to the world without having to belabour the point. Even Ironhorse adds a new angle – not just preventing us from outright judging the Iron Fae as inherently evil, but also raising the spectre of obsolescence. If the Iron fae are constantly adapting as humanity does, then can the Iron fae truly have the eternal courts that Summer and Winter have? After all, as technology advances, the current Iron fae become obsolete – just as Ironhorse is looked down on by the likes of Virus.

Once romance is out of the picture, Meghan is the character I grew to like in the Iron King intelligent, pro-active and determined in all the right ways. I also like several of the other characters – from the sinister and slightly random Leanansidhe to Grim, the Cait Sith. Whose answer to everything is “I’m a cat” and is just so effortlessly perfect.

Inclusionwise I’m still not happy. There is one woman in this book other than Meghan who isn’t, in some way, sinister – (Mab is evil and won’t listen to reason, the Leanansidhe is sinister and selfish, Titania is jealous, Virus is actually a pretty good villain – but she is a villain). And she was powerless and ended up dead. Meghan’s a great character but could use some women on her side. Also, there are Mean Girls in the Unseelie court. Really? The place has fae that rips people limb from limb for funsies and it still has Mean Girls?

Racial inclusion is still sorely lacking – the aforementioned powerless and dead woman was Asian. But she’s powerless and ended up dead. Ironhorse, in human guise, resembles a Black man. But that’s just it – he isn’t a Black man. He a horse. A big iron, steam-horse that happens to resemble a Black man when in human disguise. He’s not even a dark skinned fairy equivalent of a POC. He’s a horse. There are also no GBLT people.

In general I’m happy. The same awesome elements I loved in the last book are there. We have an excellent world, a main character I like, a story that is exciting and dripping with epic and all kinds of things designed to pull me in and make me a very happy reader. Then there’s this lack of diversity going on for 2 books – and a romance/love triangle that makes all the characters lose their ever loving minds.