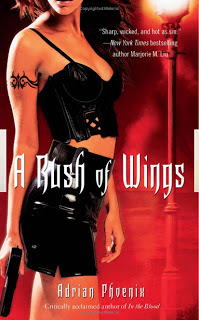 Heather is an FBI agent tracking down a serial killer who has been leaving a trail of victims across the country over the last 3 years. The trail has now lead her to New Orleans

And there she finds far more than a serial killer – she finds Dante. A vampire.

But far more than just a vampire – he’s a target for her serial killer and constantly under the eye of a Fallen Angel who seems to be hiding his own secrets; not least of which the truth of Dante’s past, shrouded by his fractured memory.

Heather faces the supernatural for the first time – and the realisation it may actually exist – still has to hunt a serial killer and is embroiled in a conspiracy that cuts to the core of people she respects and her own principles.

Opening this book, I felt bombarded.

There were vampires (though they weren’t originally referred to as such, leading to more questions) and fallen (which may or may not be angels), which were referred to in many different ways, a serial killer, a nomad (who is an llygad and I still have no clue what that means but it’s apparently relevant), True Blood all without any explanation until a lot further in.

Add to that a serial killer, some bloke called Etienne who is pissed about something – and I’ve finished the book but I’m still not sure why he’s pissed, a vampire, a winged bloke, a band, some blokes at the bar who have their own agenda that isn’t instantly apparent, some local police, an FBI agent, an FBI agent’s boss and then a shadowy figure who won’t become clear until waaaaay later, scattered with a  random minor character I have no clue about – and I stagger a bit more. Especially when the random POV switches happen – at one point we POV switch to someone who I didn’t even know at that point.

Then drop in a whole load of Cajun French and some language that looks like Welsh but isn’t – none of it translated or explained (there’s a glossary at the back as I discovered at the end).

All of that together and I started to get rather irritated. It was too much at once, there was no time to grasp at anything and I kept forgetting who various people were and what they did. Ronin’s name kept escaping me, I still have no clue who Etienne is and I even forgot Heather was an FBI agent. As for Silver, Gina, et al – I had only the vaguest idea who they were and it quite destroyed the tension that was supposed to revolve around them

I actually thought I had missed a book – there was so much information here that wasn’t explained that surely I was book 3 or 4 in a series? But apparently not. This is actually the first book.

I hung in there, I kept fighting I even took notes to help me keep track of this maze – and finally got out. Repetition, the cast thinning out, some concepts becoming clearly irrelevant (except Etienne, someone explain Etienne to me!) let me pull clear of the maze and finally understand everything and everyone. And once I knew what was happening? Once I cleared that first, oh, 25%?

It was good. Oh yes yes it was.

The vampires were pretty standard – but fun for that. None of the angsty moping vampires, they were dark and sexy and actually pulled it off. No, really – actual dark and sexy. Yes we’ve seen it before, but I like it and it was done well.

The Fallen were original – the concept of them, of the Creators and what that meant and who they were was completely and utterly new. I love it, I love the twist of it and I loved that Lucien was just flat out awesomely deadly even while fettered by real emotional issues.

Together it made for a fascinating, intriguing world that I really want to see more of. It’s one of those worlds you want to see used over and over again with different series because there’s so much to see.

The story itself was… full. I think there were, perhaps, a few too many threads (like Ronin and Etienne and the detour to Arizona) and at times I felt overwhelmed even after the beginning. But the source of E and Dante, what his memories actually covered was shocking and twisty and completely surprised me. I also was surprised that the actual criminal investigation, that I was sure would be the main thread of the book, turned out to be such a minor element of the book. But the conspiracy was involved and truly had a full sense of how scary and dark the whole thing was. I loved it, I really did love this story, bloat and all – because I hope that bloat will be threads for future books.

And the ending was immensely, powerfully satisfying, especially when Lucien showed up. It was one of those edge of your seat moments when you grin like a fool at the book because you know the bad guy is going to be well and truly smacked down.

I’m going to have a complete “your mileage may vary” moment – but I actually liked the writing. It was melodramatic and gothic and completely over the top and it FIT. It fit the New Orleans setting the dramatic angels, the passionate vampires, the dark and grim and gritty and sexy – it needed elaborate prose and over the top descriptions and a fine gothic flare. I think the writing managed to make the book gothicly stylish rather than camply cheesey (not that there isn’t a bit of that around). There was a lot of heavy emotion, a lot of angst, a lot of pain, a lot of desire – and all of it was really well portrayed. Even the peak into the serial killer’s mind was truly disturbing, as it should be.

Character developmentwise, I don’t think there was much because of the evocative language, the sheer number of characters and the many storylines meant not many could be covered in depth. But the hints and elements were excellent, especially with the conflicts that arose – like Heather’s father’s betrayal of his principles that has left Heather with a desperate urge to tell the truth and zero tolerance for corruption. But then she had to factor in supernatural creatures that seem unbound by law – and certainly beyond their means of investigating. And there’s Dante and his hatred of lies which works well with his uncertain memory – and as that memory is uncovered  we see his character and personality shift – and create more conflict with those around him and Heather’s principles. It was really well done.

I didn’t like Heather and Dante’s relationship – but it didn’t bother me while reading it. Maybe it’s the number of superlatives that were used to describe how Dante looked or how much Heather’s world was shaken so completely but their relationship didn’t feel fake. Even though it was annoyingly fast-tracked.

Inclusionwise, Ronin and Etienne were Black (but, annoyingly, these were the characters I thought were must removable from the plot) and there was a POC bartender. I don’t have a problem with any of these characters beyond the way each of them ended up and that, in a cast as big as this one, that’s a paltry number of POC for New Orleans.

I am almost certain Dante is bisexual. He certainly kisses a lot of men and it’s highly implied that his relationships with the men around him are sexual. But, as Heather puts it, he kisses people like he’s shaking hands. He even kisses his father. And the one time we see him in bed with a man, he’s also with a woman and both men focus on the woman more. When worried about loved ones being captured, it’s the woman he focuses on more than the man – and he focuses on her intimately. The only other sexual situation we see with him and men is him seducing 2 predatory gay men who try to rape him so he can feed on them and murder them.

In the end, I’m pretty certain he is bisexual – but the focus is definitely on women with the interaction with men being more ambiguous or outright violent. The serial killer is also bisexual – with more graphic details given for the sexual assault and mutilation –sexual mutilation - of men than woman. There’s a combination there that doesn’t sit well and feels like pathologising same-sex sexuality more than opposite-sex sexuality

We have a huge cast of characters, but not that huge number of women; though those that are there are excellent. Heather is a fully realised character, dedicated, competent, capable with strong integrity and passion who grows and faces some real conflict. We have a villain who, though villainous, isn’t villainous through her sexuality or any standard tropes. She’s intelligent, clinical and callous. And there’s a female vampire who seems to run Dante’s house – she’s definitely competent and capable but not much is seen of her. I don’t dislike any of the female characters, but there doesn’t seem to be many when we consider the size of the cast.

As to story and characterisation and world? I would have given this book 5 fangs. Seriously, that’s how much I loved it. But I can’t, in conscience, do this because the ONLY reason I didn’t DNF it due to the trainwreck of the first few chapters was because I have the rest of the series and would hate to abandon all these books so soon.  It just needed to slow down a little, cut a few characters, explain a little more of the world building, tone down elements that weren’t needed, cut pack on the POV switches and the book would have been much more accessible

Once this barrier is passed, it’s a truly epic book. But it’s also a very tall barrier.

(Also, I give up - who the hell is that supposed to be on the cover of this book?)