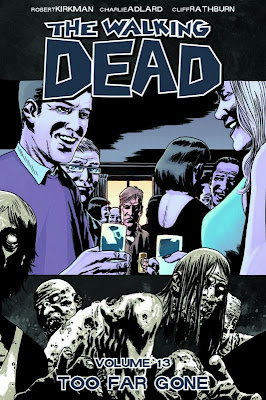 Life in Alexandria continues and the group quickly establishes themselves as essential community members. But all is not well, Rick discovers some ugly secrets while acting as constable and finds Douglas reluctant to address them. While his unstable outburst threatens them all, an attack on the community elevates the group and establishes Rick as the new commander

The first theme that struck us in this volume was, after the perfection of Alexandria presented last week, how utterly hollow it is. Now we get to see the cracks - the denial, the compromises and the general thin layer of perfection they have. We learn that Alexandria was formed by a man, Daniels, who was sexually abusing the women in the town and Douglas was forced to murder him to protect the community. This is wonderfully epitomised by Gabriel trying to have Rick & Co evicted from this “perfect” community - he can only condemn Rick’s murders because he is alive to do so. He is only alive and in Alexandria because of Rick and the group - he relies on the violence to protect him while he hides, but then hypocritically becomes sanctimonious and judgemental about the acts that saved his skin.

And this stands in well for Alexandria. While people do surreal things like walk pets and recruit Rick to help move their planters or read the same newspaper over and over again to create this facade of normality, the reality is far uglier. The community was started and secured by murder. And even then Douglas turned a blind eye until a woman committed suicide. Which seems to be a pattern with Douglas because, again, when presented with something less than perfect in his community - Pete the wife-beater - he turns a blind eye again. It is only Rick’s admittedly unstable actions that force him to address the issue. Outside the wall, the builders believe they are chosen because they are expendable and it’s notable that any women Douglas finds attractive are given positions near him.

Through this facade of normality, Douglas insists his authority be respected at least in public - determined to remain leader until it’s clear he’s unsuitable; it’s all maintaining appearances and the facade that keeps him in control. The people aid and abet this because they are desperate and afraid - they want to deny the world outside, the realities of the apocalypse, and the facade allows them to do so.

This facade is exposed in part by how necessary the group is to Alexandria. Andrea and Rick successfully defend Alexandria against an attack that would have ironed over the community without them. Abraham completely overhauls the building team which has been constantly losing people. Even Glenn is a far greater guide than runner Heath. And while Rick’s actions are extreme, he refuses to tolerate the threat from within the community, allowing abusers to act unchallenged. Their help not only shows how useful - how essential - they are to the community but also how fragile Alexandria is. It’s only really through pure luck that Alexandria hasn’t faced a force like the Governor or a Herd or severely abusive members before now.

Rick assuming leadership, especially in such fraught circumstances, with bodies on the grounds shows Alexandria’s facade cracking and the group moving in to fill the cracks.

Now that the team is no longer in clear and present danger they are far more willing to challenge Rick’s leadership and go with the status quo. Even as the residents of Alexandria see Rick’s group as a necessary addition to their little township and are changed by the presence of Rick et al, Rick’s group is also changed by the residents of Alexandria. When Rick and Glenn took the guns, Rick commented that he was worried about a member of his group turning against him. After everything that the group has been through they had really become tightly knit, yet Rick doubted their solidarity knowing full and well the precious nugget of safety that Alexandria potentially provided; in other words, a member of the group may buy into the facade. His feelings of doubt were bared out by Andrea questioning him when he presented her with a gun. Andrea wanted to live by the rules as presented to her and it was made clear that the taking and holding of weapons was Rick’s risk and not hers thereby establishing a clear line of demarcation between the two of them. This is a small fracture but a fracture nonetheless, showing us that though these people had been through a lot it was only because of circumstance and not choice. At the end of the day, people wanted to do what made them feel safe and if that meant thwarting Rick’s leadership so be it. We can see this spirit again when Michonne disarmed Rick after he attacked Pete. Rick was shocked that Michonne acted against him having always perceived her as his weapon, his attack dog.

There is also an ongoing theme of mental health among the group as well. Able to relax for the first time in a long time, many of the characters have a chance to take a breath and feel. Maggie talks through her insecurity with Glenn. Abraham talks through his fears, Carl grieves for his mother, Rick has his break down and even Michonne asked to talk to Rick about their hallucinations.

In fact, Michonne is the annoying exception here. Michonne has probably suffered more than anyone else in the group but she’s also the one who is least allowed to show pain or grief. This partially explains her anger towards Morgan’s grief for his wife or her fury at Rick for his breakdown - she has suffered more than both and she has managed to hold herself together; it’s legitimate that she would be angry at both of them.

But, it’s problematic that she didn’t get to grieve or fear or break down. All she gets to display is anger - the proverbial angry Black woman. Why can’t she grieve? Why can’t she hurt? Why can’t Michonne be vulnerable and show how she is hurting - like Rick, Morgan, Andrea, Carl, Abraham - just about everyone else? It makes for an unpleasant trope. Similarly unpleasant is her being show explicitly nude; not that it was inappropriate for the scene, but even in sexual situations the other women have not been depicted that way.

I would also like the still implied gay couple of Aaron and Eric to not be erased so soon after introduction - after 78 comics and an enormous number of characters, it’s too soon for this scrap of representation to be rendered into the background.