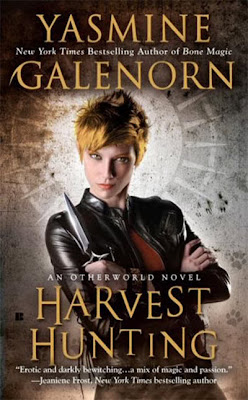 We follow Delilah this book – and how her life has changed. Following a skunk-inspired make-over and realising that her relationship with the now nigh-immortal Chase is coming to a close, she enters a new chapter of her life with the Autumn Lord – and his sexy representative.

Along the way, they have a kidnapped werewolf to rescue, a spirit seal to find and some dangerous werecoyotes to thwart. And, of course, there’s still the Bonecrusher to defeat – and she’s bringing the fight to the sisters’ home.

And I don’t just mean number of books. I can tackle several books. But it’s HUUUUUGE within those books. It has a vast cast of characters and the author has really gone out of her way to ensure every single one of those characters is a character. They’re not just names. They have things happening in their lives. They have lives, they have issues, they have their own stories and battles and causes.

There’s also still a problem with the writing. It has IMMENSELY improved since earlier books, don’t get me wrong, especially the fight scenes (though I still think we see far more of what everyone else is doing in combat than is realistic or necessary) but we still have things like the group meetings where everything is reiterated (again, not nearly as bad). The worst habit remaining though are clothes, cares and scenary. They can drive from A to B without me knowing exactly how they’re getting there, I don’t need to know what car they’re driving or who is in what car and I really really really don’t need to know what clothes everyone is wearing all the time. By this stage, we know what clothes everyone habitually wears, take it as a given.

In fact, even if all the characters were just names there are still far too many people for me to keep them all together and I’m forgetting people because there’s just so much to keep track of. Seamus, Rozuriel, Carter (and his daughter – I entirely forgot to pair of them), the sisters’ father, Zachary, the necromancer bloke, the healing elf, various and sundry shapeshifters…

I feel like there’s just a lot of storylines that maybe aren’t needed – some of them make for great background flavour so long as it doesn’t intrude further. But we’ve already got the 3 sisters and then there’s Chase and his new immortality, and a new dragon on the scene (and we’ve recently had the rather unnecessary distraction of Smokey’s father) and now we have Carter’s demon network/titan research group. We have the humans and their anti-fae antagonism. We have the sister’s father turning on Camille. I just wonder if they’re really all necessary – or if it’s necessary to have them involved as much as they are – especially when you pile on all the new characters as well.

The problem with all these elements crammed in is that I find myself less patient with cute little scenes like Delilah being skunked, or Narissa drunk and I’m even coming to find Maggie the gargoyle – who I love – an impediment simply because there’s so much crammed into the book, I want to trim everything.

Still – this bloat is a problem but it is my only problem with the book. Which is saying something. If it weren’t for the bloat, it would probably be a 4 or higher, but the bloat annoys me.

I liked Delilah and her growth since the first book – and so very well symbolised in this one. She’s tougher, she’s stronger, she’s become harder and has had a good look at her life and relationships and moved on in a mature fashion. Yes, there’s grief and pain, as there should be, but she’s still moved on. I didn’t appreciate that the minute she ended things with Chase, Shade showed up – I think it was a little convoluted and a little convenient to say the least. But leaving that aside, she has grown and it works for her.

We had some good resolution of the Bonecrusher story arc, it was fun and exciting but, alas, I again kind of missed parts of it because I didn’t remember all the 8 bazillion names.

There was still a very strong sense of epic, but I think that is being lost as the story gets broader and more extraneous elements are added – Shadow Wing and the threat he represents seems to be falling more into the background as we have Autumn Lords running around and family and relationship dramas and dangerous werecoyotes and terrifying drugs and Camille going to hospital every 5 minutes. It has an awesome, excellent story – but the series is letting both the wide number of fully realised, developed characters and this wide, extremely deep and fascinating world overwhelm the story.

It feels contrary to complain because the things that are damaging this series in my eyes are the same things I normally love about a series. The world is wide, incredibly broad with a vast array of forces, supernatural, politics. I love that the world doesn’t revolve around the sisters, I love that it grows and moves and changes and isn’t just a backdrop for their actions.

I love that there are so many characters who are developed with their own lives and agendas. I love that they’re not just servants and extensions of the main cast. They’re real people and so much work has gone into making them so. They’re not just background colour to show off the D’Artigo sisters

Inclusionwise we have a plethora of strong female characters with their different strengths. Positive sexuality, moral clarity, knowledge, sexually active and unashamed. While pretty much all of them are warriors, they’re not defined as warriors as why they’re well rounded, strong characters (especially since there are definitely people more powerful than them out there). And it’s not just the sisters – the massively huge cast also includes several other skilled women.

I even kind of like one of the women’s betrayal because she was treated so delicately by her step-father. She had power, she had potential and she was angered and frustrated by his refusal to let her develop. If you’re going to have a villainous woman then there’s the way to go. Even the big bad Bonecrusher, a Lamia, was terrifying and dangerous because she’s a giant poisonous snake with necromancy not because she’s a dangerous seductive sex beast.

Menolly and Nerissa are maintaining their relationship – while they still have fun with men they have, in a switch from what is so common for bisexual women in Urban fantasy, made each other their primary relationship and seem to be sticking to it.

We do have POC – Carter’s daughter and Morio but only Morio is what can be considered a major character and he still isn’t as prominent as most of the rest of the main cast. With such a huge cast of characters more racial diversity is a definite need.

I love this series, I liked this book – but sometimes I feel like I need a flowchart and a sheaf of notes to keep track of everything that is happening. I think it could benefit from some spin off books – to round up character’s lives while keeping the main series focused on the plot.