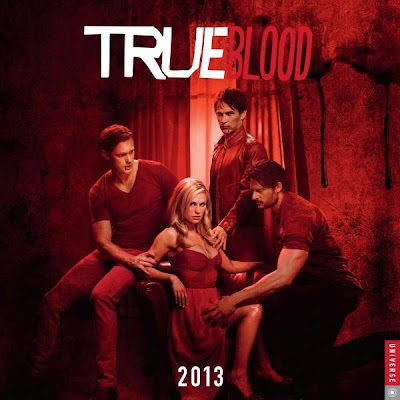 We have spoken before on how many books have presented abuse, sexual abuse and complete lack of consent as romantic - but the same themes have also been heavily present in True Blood as well. Sometimes shown blatantly in the show, some made deeply problematic by the show creators and some rendered problematic by fandom’s reaction. The show has many sexual scenes and relationships, it’s a recurring and often explicit theme, but many of those sex scenes and relationships (or the conversation around them) are highly dubious and are sorely in need of more vehement challenge.

This season’s antagonist was Warlow, played by Rob Kazinsky. Warlow is a centuries old vampire/fairy hybrid who had determined that Sookie will be his one true love and his companion in the centuries to come. Speaking about Warlow’s feelings, Kazinsky had the following to say.


"He's been waiting six thousand years for her," he says. “For that reason, it didn't matter whether she was as attractive as she ended up being or not. He didn't know she was going to be a babe. He knew that she was going to be a fairy and a princess and that's all that really mattered to him, because he killed his entire tribe and she is the last of his line."


Despite Kazinsky’s suggestion that Warlow has true feelings for Sookie, what is evident is that he loved the idea of her, not Sookie as a person. When Warlow approached Sookie with his plan to capture himself a fairy princess, he knew absolutely nothing about her. Sookie essentially was a prize for him to possess and this is proved by his violent reaction to her suggestion that they should date rather than immediately commit to each other for eternity. A man who loves a woman does not try to force her into a relationship against her will, nor does he slap, threaten and stalk her when she refuses to capitulate. Perhaps this was his attempt to soften the character of Warlow but it reads like apologism for violence against women. Urban Fantasy like many other genres has a long history of justifying abuse as love and this has everything to do with our misogynistic culture.

Jason is also the centre of several of these controversies. In season 4 of True Blood, Jason was kidnapped by the werepanthers of Hotshot. He was abused in many ways but, in particular, he was repeatedly raped by Crystal and many of the young women of the village being forced to have sex with him while he was tied down. This scene is both graphic and painful - there is no romanticising the rape or treating it as a happy fun time for Jason, there is even some ongoing suggestion that Jason has been traumatised by the event. This is the positive. On the negative side, Jason wonders if him being raped was a “punishment from god” for having too much sex.

This is made far worse by comments by writer Alan Ball and Director Jason Petrarca about how Jason was getting his “comeuppance” for his promiscuous ways and how Jason, who views part of his sense of self on his sexual prowess, is now having that used against him.


Never mind that we have never seen any suggestion that Jason has ever coerced a woman into bed against her will. Is he promiscuous? Yes - but that’s hardly an indication of coersion, especially since Jason is most definitely conventionally attractive. He doesn’t deserve punishing for that - and he certainly doesn’t deserve punishing with rape. Even further, several blogs reporting and recapping the scene referred to it as a sex scene, not a rape scene. There is a strong sense of dismissal of Jason as a rape victim because he is male and/or attractive and/or sexually active; in all cases, this is unacceptable.

In the latest season, Jason starts a new relationship with Violet, an 800 year old vampire - she’s definitely the dominant personality in the relationship and in the season finale it’s played for humour that Jason has to earn the right to have sex with her. But let’s not forget how this relationship began. Jason was thrown into a room full of hungry vampires. Violet chose to claim Jason and make the other vampires back down and then added that Jason was her’s forever - because she’s a big believer in monogamy.

There has never been even the slightest sense that Jason had a choice in this matter. In fact, right to the end of the season, Violet made it clear she was claiming Jason and he couldn’t leave just because they were out of the prison. Even if Jason had been given a choice, we cannot ignore how much he relied on Violet to survive in the vampire prison.

This relationship has its roots in Violet making Jason her toy, her property and giving him no chance to refuse; but at no point has this been challenged. In fact, Violet’s dominance is presented as both sexy and even funny.

This season Jessica and the new character, James were placed into room and told to have sex in front of witnesses. James refused making it clear that he was not going to rape Jessica for which, in turn, Jessica ended up thanking up. Yes, it was great that James refused to participate, but what is often ignored is that he himself was an unwilling participant. If he had capitulated and had sex with Jessica he wouldn’t have raped her per se because he was forced into having sex through torture. This sex act would legitimately have meant that they were both being raped because neither wanted to have sex period. To be clear they were both brought into a room and ordered to have sex or face torture. What happened is that James refused to be raped. It’s easy to overlook James as a potential rape victim simply because we socially turn a blind eye to male rape and we have been indoctrinated to believe that no matter the circumstances, that men are alway up for sex.

One scene we saw that seemed to get it right was this season with Eric, Pam and Pam’s forced therapist in the vampire prison. Pam initiates sex with the psychiatrist to secure some safety and make deals with him - and to derail his questioning about personal matters she does not want to discuss. Despite her initiating, the power difference that comes between prisoner and guard - especially guard who has the ability to torture, starve and kill their victims - destroys the possibility of consent. This seems to be something True Blood acknowledged. When Eric found the psychiatrist and the doctor boasted about having sex with Pam, I half expected Eric to kill him. Because I expected this to be part of the trope of the “outraged father” protecting the “deflowering” of his daughter; a trope that has little to do with consent as it does possession, since it applies as much to consensual lovers. But Eric didn’t - Eric took the psychiatrist to Pam so she could have revenge; this acknowledged Pam as the one who had been wronged and needed redress, not Eric’s claim on Pam.


In all media it is important to ensure that, when depicting sex and relationships, that consent is made clear and that lack of consent and abuse are clearly labelled as such. True Blood, as a sexually aggressive and explicit show has even more chance to emphasise consent, but, equally, it has repeated chances to get it wrong. We live in a society that is steeped in rape culture, part of this means a constant background of excuses for rape or dismissal of rape.

This background rape culture makes it ever more essential for media to be vehement - if consent is in doubt, it is rape. No-one deserves rape. Anyone can be raped. And rape is never ok.
Posted by Sparky at 9:00 AM