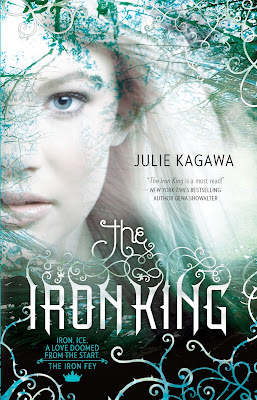 Meghan was struggling through her normal life, having to deal with the standard problems of a teenaged girl: the mean girls at school, bullying, getting her work done at school because of the antiquated machine they have at home, hoping to get her driver’s license.

But she keeps seeing things – and she’s not forgetting them. Even harder to forget is her baby brother trying to kill their mother. And growing claws at that.

It’s the first of many revelations – about her heritage, her parentage, about her best friend and that her brother has been kidnapped and replaced. And that faerie is real and lurking all around her – and faerieland is just a closet away

She has the chance to forget and return to a normal life – but her brother is out there and she’s the only one who can save him.

This book had some pretty flawless writing. From page 1 to the very end I can’t really point to anything and say “clumsy” or “awkward” or “over-described” and there’s nearly always something I’ve highlighted, but not a line here.

The pacing is excellent – despite being in several sections from Meghan’s ordinary life at school, to the world of the fae, to the different fae courts – everything moves well and quickly. Each section gets enough attention to truly establish it and characterise it. Each section is fully realised with its characters, the nature of what it is and what it represents and the forces in play – but none of it is over described or cluttered with lots of new information we don’t need. We don’t dwell anywhere or dawdle or rehash the same old lines over and over again. It’s impressive how careful the writing is to manage all this

It’s even more impressive since we’re dealing with the fae and fae worlds that pull in a lot of mythological creatures (both faerie and otherwise). We have an extremely rich world here – not just the two courts of the fey, but the way the fey react with the human world, why they react, their feeding on dreams and glamour and excitement and emotion that gives them their vibrancy and even their essence. The power of human belief – and the damage caused by the banalty of non-belief. And even how that belief feeds into things like monsters under a child’s bed or imaginary friends – the powerful belief of the child empowering and attracting the fey.

These are concepts I’ve come across before – but not often and it’s definitely fun to see a new take on them. But then we have the rise of the Iron Fey, the acknowledgement that human kind hasn’t stopped believing or dreaming – only now instead of dragons and faeries, we’re believing in technological wonders. Wonders built from science and iron and things that are the very antipathy of the fey themselves. The interplay and development between them isn’t only fascinating but it really has both a lot of plot hooks and nuances, especially when we can see that it’s far from a simple case of good fae vs bad fae

It would be extremely tempting to overdescribe the fae and these concepts to try and fully show how alien that are, how non-human, how weird and wonderful and creepy and shiny – especially when it comes to handsome sidhe princes that the genre usually cannot possibly describe with anything less than 4 paragraphs of knife edged cheekbones and piercing blue eyes.

But not The Iron King, the descriptions elegantly encompass the people, the places, the world, the alienness and even the feeling and theme of everything without resorting to melodramatic monologues and extremely long prose. This even applies to Meghan and her feelings – be they of love or fear or worry for her brother. Her emotions are clear, powerful, well conveyed but we don’t have to revisit them a hundred times.

I don’t like all of the emotions in the book, by any stretch. I think Meghan’s sudden love interest came pretty much out of nowhere and still doesn’t really have any foundation by the end of the book. Even if we out her crush down as a teenaged crush based on a devastatingly handsome man - it doesn’t explain how an immortal fae was so ready to throw away his life and adjust his loyalty so completely over such a brief period. Similarly I’m not keen on the love triangle that is very much on the cards – but at least this relationship has the basis of long association on which to build. Though, since Robin has known her since she was a baby and she’s only 16 and he’s hundreds of years old, there’s no way that can be anything but very very creepy.

I’m not adverse to the love interest developing – because it could be intriguing, neither character annoys me and I think there’s some good potential there. But I think the few day’s brief acquaintance is just too little time to completely throw away your old life over.

However, elsewhere we get some excellent challenges of some very tired tropes. The typical “mean girl” at school is humanised, learns her lesson – and there’s no vindictive “serves her right” undertone. When Meghan learns about her mother’s lies she’s angry – but it doesn’t become an epic tirade or a grudge with which to shake the heavens, nor does Meghan run sobbing at the awfulness of it – she recognises the position she was in.

In fact, Meghan in general is an excellent character, she’s intelligent but not perfect. She makes mistakes is confused and needs help in a dramatically new situation – but she also learns, adapts and manages to come out on top through wits. She’s powerful but can’t tap into it, using determination and intelligence more than super shiny uber powers to win the day. Yes the story has a couple of coincidences working in her favour to make her reach the end, but it’s as much the enemy’s arrogance as random deus-ex saving them all. It is emotion that drives her – seeking her brother – but she’s not emotional and irrational even when in the throes of love or grief or fear. She doesn’t automatically bow to authority, nor does she throw lots of flashy defiance when it would be nigh suicidal to do so. She picks her battles and didn’t let the truth of her heritage go to her head.

She’s a great character and I like her and want to see more. But I also want to see more female characters who aren’t random passing tools (the oracle), antagonistic (the mean girl, Titania or even her mother) or meek servants; but I believe we will see that in other books.

We also need some minorities. Any minorities in fact – there are no racial minorities and no GBLT people – though homophobia is used to taunt a bully in the beginning. Even with most of the characters being non-human, some representation would have been nice. There were some excellent comments on class, however; Meghan is considered poor. The luxuries of her class mates are far out of her reach and she is mocked and bullied because of it. She rejects finery because she has created an identity and personal style of not being obsessed with the shiny things she can’t have. She is attached to an Ipod because she spent a year saving for it and it’s the only real item she has that is hers. There’s a lot of comments throughout and how she is regarded as a “hick” by others.

Really, this is one of the books where I just have to there’s few if any real flaws. The isnta-love I can easily forgive because of how it’s done and how the plot doesn’t require it. It’s a minor niggle. I don’t like the lack of minorities and that’s considerably more major niggle. The writing is perfect though, the world is rich and the main character is definitely someone I can get behind. This isn’t just a good story, it’s a great story with excellent potential for the whole series