The Walking Dead Volume 12: Life Among Them 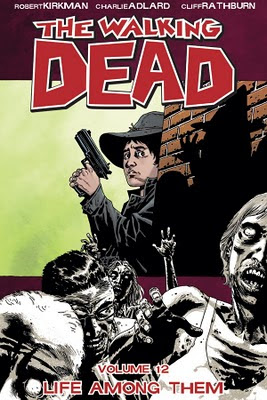 Rick and his group finally approach Washington and learn the devastating news - Eugene was lying. He isn’t a scientist, he can’t save the world and he isn’t leading them to safety.

But they seem to fall on their feet when they are found by Aaron, a scout for Alexandria. Alexandria is a walled community, a safe community, protected from the zombies. It is a place where kids still play, no-one is armed and people even still have pets and parties. It is a utopia in the apocalypse

The group joins Alexandria, but are both suspicious of strangers and face the apparent fragility of a place that seems far too good to be real in this dystopian world.

The group has been through fire and survived - but it has dramatically changed them.

Then we get to Alexandria, the safe zone. In some ways this represents everything they ever hoped to find - a place of safety. A place where they can lead normal lives. A place where they don’t have to be afraid. It was such a dramatic transformation that even they transformed - Rick shaving, showering and getting a police uniform is symbolic of this. “Civilised” Rick was such a dramatic difference, it took him back to Issue 1 and the group didn’t recognise him.
And they don’t fit. As we can see that even “civilised Rick” is marked by his missing hand; the apocalypse has left an indelible mark no matter what veneer of past Rick he wears. We see that they’ve all changed so much that this place doesn’t work well for them. Carl has forgotten how to play - and doesn’t understand kids wasting time trick-or-treating or wearing costumes in a world with zombies to defend against; he even walks around with his own gun when even the adults Alexandria can’t walk around with weapons - his comfort with the weapon horrifies and even angers the Alexandrians. Michonne makes a scene because she can’t relate to women gossiping about such petty issues - and the idea that one woman worries - WORRIES - about cooking food. In a world where Michonne has survived so much, endured so much, she’s presented with a woman who’s worry is if someone likes her food. Douglas even asks them if they mind sharing houses - when they have all been packed into tiny vans and see his “roughing it” as unimaginable luxury.

Douglas recognises this to a degree - part of the reason why he values the team is because they know things and have experienced things that none of the Alexandrians can understand. Rick already gave him the idea that they need a look out in case of humans attacking as Douglas has not truly seen the threat other human groups represent. He understands in abstract terms but he has never suffered it.

The group recognises this - even as they slowly relinquish their paranoia and even revel in being able to ape normality for a short period; they do not trust Alexandria as a permanent solution. The denial feels fake to them - and part of that is not being able to give up the battle, but part of it is realising just how bad it is out there and how unready the Alexandrians. The almost ridiculousness of the Alexandrian bubble is such that Rick (and even Carl and Michonne) almost has a contempt for them - Rick saying that if the Alexandrians tried to kick them out, they could always claim Alexandria for themselves. Even though the 30+ people of Alexandria outnumber Rick’s group of 12, Rick is sure the experienced, battle hardened group could take down the naive, insulated Alexandrians in their bubble.

The overall feel is not so much safety as it is fragility. This place is too good to be true.

Inclusionwise, I quite liked Michonne being the one to lay down the law to Rick and say they needed to go to Alexandria. That if they don’t take a chance on it, where else would they go? Michonne has, for the last few volumes, not been the most vocal member of the group - but when she speaks she speaks solid sense. Unfortunately this doesn’t help her character grow and does turn her into a combination of weapon and wise advisor. Even though Rick clearly values her more than any other group member than his son, I’d like to see him value her as a friend more than an asset.

We’ve had a large influx of characters and most of them haven’t really touched on any issues yet, largely the characters have just been introduced so don’t add up to much comment. However, Rosita has now been with the group for some time and so far her sole role has been “Abraham’s love interest”. She isn’t a new introduction and both of her white male companions have had far more exposition and development than she.

Aaron and Eric are newly introduced and we finally have a same-sex couple that may not be situational prison homosexiality! Yay, it only took 67 issues! I do want them to be verified as a couple more than one ambiguous statement and the malicious gossip of the town though, but I’m hopeful, especially in a dystopian which is seems to be the most erased of genres.