Rachel Skartsen and the Mosaic Church 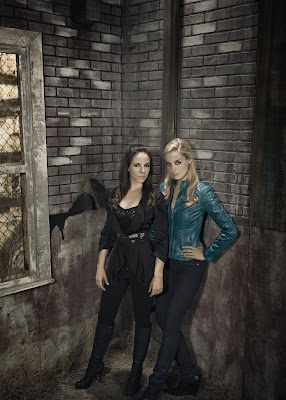 Recently it was drawn to our attention that there was a brouhaha about Rachel Skarsten - the actor who plays Tamsin on Lost Girl - tweeting her support and membership of the homophobic Mosaic church in LA. Naturally, this caused some comment, especially given the prominent lesbian and bisexual characters in Lost Girl

This is always an awkward topic to talk about and I was in two minds about talking about it at all. However, having decided to, it is one that requires some nuance and length.

Firstly, it’s a discussion that raises the question of whether we’re going to examine all actor’s religious beliefs - especially since Ms. Skarsten’s church, as far as I can see, is no more homophobic than many other large churches like the Catholic church, Anglican church, Baptists, Latter Day Saints - in fact, I would say that the Mosaic church is pretty standard in its homophobia compared to the majority of organised denominational Christian churches. It would not surprise me if a huge number of the actors in shows we love, attended churches that hold objectionable, homophobic views. I would say it’s almost a certainty that many of them do.

On that, it feels rather unfair to single out Rachel Skarsten. Especially since organised Christian churches that don’t hold views that aren’t at least a little homophobic (churches that outright say being gay is not sinful and treat gay parishioners with exactly the same respect, rites and blessings as straight ones) are not actually all that common. This is a deeply depressing state of affairs - and certainly one that mainstream Christianity needs to address; but how much blame should attach to individual Christians for that? Because if we are apportioning blame, there are 1.2 billion Catholics in the world supporting a church whose homophobic rhetoric is, at very least, as homophobic as the Mosaic church. I would rather all supporters and members of homophobic churches take a good, long look at what they’re supporting and endorsing rather than singling out one among many.

Ultimately, as well, how people deal with homophobia from their churches can be a fraught issue. Personally, I cannot understand why someone would seek deity in a place that preaches hatred. I do not see how a place that preaches discrimination can be regarded as a source of deity (and certainly not morality). I do not understand this, I find it dubious. However, at the same time I acknowledge that the church can be a source of immense importance to people - religiously, culturally and from a community standpoint. I find it... distressing that people feel they cannot connect with their faith, their god, their culture or their community without also endorsing and supporting bigotry; I also can’t help but feel that people are saying “the humanity and rights of GBLT people are less important to me than X” (whatever “X” the church provides for them). But these religious choices are extremely powerful and personal. And at least it’s a little better (though very much in the same vein) than people saying that the humanity and rights of GBLT people are less important to me than fried chicken or watching a film. Because that’s just really depressing.

But there are three elements that I feel are worth mentioning in this case - and they apply not just to Rachel Skarsten but as good general points.

Firstly, there is an issue of tweeting the church and endorsing it; attending a church and extolling its virtues are different things. Herein lies one of the problems with both the brevity of twitter and celebrity endorsement - it’s a good idea to check out what you’re endorsing first. I don’t know how aware Rachel Skarsten was of her church’s stance on homophobia - in fact, I did a fair amount of googling and the Mosaic church does put its homophobia as front and centre as many churches do. This is a trap I’ve seen other celebrities fall into - in fact, it wasn’t long ago that Cher tweeted support for a homophobic pastor and faced gentle criticism of the bigotry she was promoting. I have to say, Rachel Skarsten’s response was considerably better than Cher’s rather... excessive rant.

It also has to be said that, unlike the other actor’s whose religion we haven’t commented on, this came to our attention because Rachel Skartsen herself put it out there and drew attention to the church. There was no need to go searching for her church or beliefs - she promoted them. Anything being promoted invites a counter narrative.

Secondly there is the nature of the tweet’s reach. Rachel Skarsten is a talented actor and her role as Tamsin in Lost Girl is an interesting, well done character. I do hope that her role means we will see her in more things. I haven’t seen her in many other things (I recall a cameo in Beauty and the Beast) and her IMBD page shows that Lost Girl is the first time she’s had a role for longer than 4 episodes since 2003. I admit to being rather ignorant of any kind of media outside my preferred genre so she could have been in some major blockbusters I’ve never heard of - but ultimately I think it’s fair to say that a decent proportion of Rachel Skarsten’s fans and followers discovered her through Lost Girl.

An (ostensibly) pro-GBLT show. Particularly one of the few out there that isn’t directly in the GBLT niche (and actually meant to appeal to straight people as well beyond the fetish/freak show element) that has a GBLT protagonist. And Rachel Skarsten’s character, Tamsin, is herself bisexual and I think we’re likely to see more scenes between her and Bo next season. In fact, we think she’s likely to be a more prominent character in general next season.

Using reach and influence partially garnered from a role in a heavily GBLT themed show to promote a homophobic church? There’s just no way that’s ever going to be good, not going to feel hypocritical or like a betrayal.

But thirdly, and a major point, there’s the tweet Rachel Skarsten offered in response:

I firmly believe in equality for all & have nothing but love for the LGBT community. Rach

As I’ve said above, this is considerably better than some celebrity responses to criticism from GBLT people. The problem is, partially, that it didn’t actually address the issue of the Mosaic church’s homophobia or her endorsement but also the rather dismissive nature of the tweet.

This doesn’t not mean I doubt the sincerity of her tweet - far from it. I’m confident it’s heartfelt - but it’s also somewhat hollow. And this doesn’t just apply to Rachel Skarsten, not by a long shot - this is a major issue that many members of homophobic churches really need to look at and need to have looked at for a long time.

I firmly believe in equality for all and have nothing but love for the LGBT community. I am also a member of, supporter of and promoter of a church that promotes the idea that LGBT people are sick/sinful/wrong and need to change and certainly are not due equal legal protection and rights as straight people.

This is contradictory. And, again, I want to make it clear that Rachel Skarsten is far from the only person to do this - in fact, her actions here are typical actions adopted by thousands if not millions of straight allies.

A blanket declaration of general (and vague) good will and positivity does not change the fact you are supporting and endorsing an institution that is actively promoting the very opposite - prejudice, negativity and inequality. Pretty words don’t change what you support with your attendance, your promotion and with your money in the collection plate. A nice speech doesn’t wash your hands clean.

I repeat that I’m not calling for everyone to leave their churches or they’re a dirty rotten homophobe. As I said above, there are important reasons people attend certain churches. But I am calling for people not to dismiss the homophobia of their churches by asserting their own personal good will and continuing to support bigotry. Don’t say “I oppose inequality” when it’s a lie - when you are supporting, however reluctantly, bigotry. Address it, speak up in disapproval even if you feel you cannot leave the church. Do not ignore it and pretend the homophobia isn’t there - and that you aren’t a part of it.
And that’s not even remotely just aimed at Rachel Skarsten. That’s a call for everyone to look at their pulpits and see what they’re overlooking or quietly ignoring. “It’s my religion” isn’t an excuse for bigotry. Saying pretty things does not cover up bigotry. And if you are a member of a homophobic church, you are supporting bigotry, if you are promoting, supporting or helping a homophobic church, you are supporting and endorsing bigotry.

Maybe you have reasons for that - but that bigotry needs to be confronted and people participating need to own that and acknowledge that. You’re not changing anything by saying nice things then filling the pews of the homophobic churches.


Their power and their influence stems from their members - and they use that influence to advocate against every right GBLT people have fought for - from marriage, to non-discrimination, to acceptance of our children to the outright right to exist free from imprisonment, harrassment or even execution. And no, these homophobic positions are not relegated to the extremes of the Westboro Baptist church, but can be found in mainstream Christian denominations, endorsed and supported by an ostensibly well-wishing congregation which continues to say (and tweet) nice things about us, while sitting and supporting virulent attacks on GBLT existence. This homophobia is repellent and by accepting it, you are part of it.
Posted by Sparky at 9:00 AM