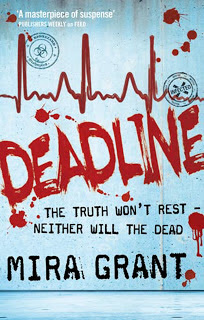 Shaun is not doing well after George’s death. At least she’s still with him – or his grief shattered brain keeps conjuring her up for him – but the fact the boss is hearing voices (and talking back to them) doesn’t reassure anyone else around him.

But the drive to avenge George continues – along with the George driven need to discover the truth. What is really behind the conspiracy that lead to George’s death? A fleeing doctor from the CDC may provide the answers – starting with the CDC’s disturbing habit of killing off researchers who get too close to certain topics and asking the question WHY the CDC’s vast budget actually devotes so few resources to actually curing the zombie plague?

Questions lead to rogue researchers, some stunning data and some truly devastating revelations – both personally, but also for the entire planet.

This book had a very different tone from the previous book and, on the whole, I think that worked appropriately. In the last book things were very different for George and the people around her. She was embarking on the opportunity of a lifetime. They were doing something they passionately believed in, they were increasing their site to unprecedented levels, they were legitimatising their industry. Even through the eyes of these cynical people, there’s a positivity there, a sense of them doing something powerful and meaningful and things getting better – at least until everything starts collapsing. But even then, as the conspiracy is revealed in Feed there is a sense that they’re uncovering it, they’re succeeding.

Now contrast that with Deadline. They’ve uncovered the conspiracy – but it’s still been largely hushed and a very public scapegoat has been thrown to the wolves. They’re freewheeling, they’ve lost people they care desperately about, their leader is having a full blown psychotic break. Yes they’re pre-eminent bloggers now, but the cost has been huge and, for much of the book, they don’t even know what to do and are rather desperate and flailing. Even with the zombie apocalypse, Feed had a sense of, well, not positivity – but competence and confidence. George and co knew what they were doing, where, when and why. Shaun and his fellows do not. They’re lost, desperate and facing off against an enemy that is more dangerous than just about any other force in the country. People have died, people are continuing to die and no-one is grieving in a healthy fashion.

And then there’s Shaun as the narrator. George was a Newsie. She was a Newsie who endeavoured to present the truth with minimal spin and garnish. Her tone is informative and attempts to be objective. Shaun is not. He’s an Irwin. He finds dangerous situations and pokes it. He’s also emotional, depressed, in incredible pain, angry and dealing with mental illness. His tone is angry. His tone is subjective. His tone has an agenda and a mission and isn’t there to info dump for us. When he does info-dump, it’s more about his personal state and emotions than bringing us up to speed on the world.

The tone is different. And it should be – if anything, the tone isn’t different enough.

But we do get a slanted view of the world itself which also helps explain the conspiracy more than George’s dispassionate assessment. While the fear everyone lived in was described, Shaun comes in and hammers home how much of that fear is paranoia. How the precautions people accept are completely and utterly excessive –people don’t shop, people don’t go out, Irwins and Fictionals took off people because people need to live vicariously from their own homes. That the risk is not nearly as bad as is justified by the constant theatre of threat and precaution and how the constant paranoia has created a generation – several generations – of people who are literally addicted to fear and wouldn’t know how to function without fear. Shaun’s outright condemnation of the eternal atmosphere of fear and the things they can make people do in the name of that fear feeds into why the conspirators are doing what they’re doing.

There is a lot of Shaun’s mental illness, his hallucinating George and people finding it odd and strange and being suspicious of him – but I think that works. Not only does it fit with the overwhelming depiction of Shaun’s grief, but it doesn’t go away. Is it repetitive and tiresome at times? Maybe, but I prefer that than having a mental illness that disappears when it becomes inconvenient. I like that his grief isn’t pretty. He’s violent. He’s angry. He’s irrational. He’s careless and self-absorbed. He’s not romantic and tragic in his grief – he’s messy and broken with it.

Far more out of place, to me, was the sudden revelation of Shaun’s relationship. I do not believe that, in all of Feed, this relationship would not have been inferred more than it was. It was a surprise and, really, after the first book it really shouldn’t have been.

The world building continued well but with less detail than the first book though we still do get some fascinating little details – like how devastating the zombie apocalypse was to India with its dense population and number of infectable-sized animals – again because Shaun is the narrator, but also because so much information has already been passed on and this book manages to avoid repetition – this is an extremely good thing. We still get new insights and new angles – like how the CDC has so little oversight and carte blanche to do almost anything as well as the unethical experiments they have been performing.

Do I like the writing as much as the last book? No. I loved the world building, I loved George’s style. I just preferred Feed but I can see the reason for the shift and agree with it

I think the shift also helped established a much grander feel to Deadline. Feed was, ultimately, a fairly personal story that grew grander. Deadline is much much more, they start with a conspiracy and, as they reveal more of it, we get a true sense of the sheer enormity of what the conspirators have been doing. It’s so well conveyed that it’s actually a book that makes your jaw drop in shock  because I’ve been pulled in sufficiently that I can have an “I can’t believe they did that!?” outraged surprise over what happened in the story. And, no, I’m not going to spoil – but the impact of what they were truly uncovering was incredibly well done – it made it clear that their sacrifices were worthwhile. And it did this through lots and lots of really well researched medical jargon.

Obviously we lost our female Protagonist with George and one female character with Buffy. I don’t know, but I didn’t connect with the new side characters as much as I did with the ones from Feed. So I didn’t have the same connection with Alaric, Becks and Maggie that I had with the original team which meant they all downgraded a little in my eyes. But they were great characters with some of their own history – and brought some diversity along with Mahir (whose British accent was, perhaps, a little off. Yes we use “bloody”. No we don’t use it all the time) since Alaric is Asian and Maggie is Latina. All largely non-stereotyped as well. There was also some excellent commentary on the “trophy wife” status Becks was tried to be forced into but also some good class commentary – how all this security and obsession quickly fades when you get into the poorer neighbourhoods.

For me the whole book worked. There were a couple of weak points (how it ended, the relationship) and I preferred the first one – but it’s definitely working. My complaints are minor, in general, and come only from the vastly huge expectations I have put on this awesome series that may be one of the best, creepiest, most powerful zombie apocalypse stories out there. I love it, it’s awesome and I will be devouring the third book.