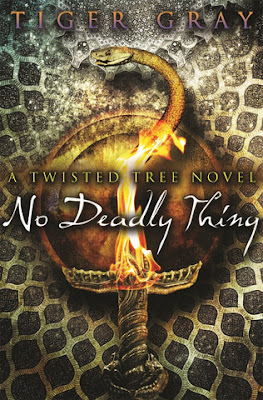 There is just too much of this book to summarise – Ashrinn, an ex-special forces soldier returns, injured from Iraq and discovers a whole new magical world, powers he never imagined, his own personal connection to the divine and, above all, a purpose. A purpose to save not just his home, not even just the magical community – but the entire world. And in the process find his own personal family life shook to the core.

This book has some of the best characters you could hope to meet; even side characters have a sense of history and personality just waiting to be discovered. Even side characters banter off each other well. It has an amazing level of diversity with GBLT people, POC and disabled people. Each of these characters has the foundation of some truly excellent development to them. Their interactions promise lots of real connection and development.

The world is rich with many layers and powers and I long to delve into it an examine every corner. We have different organisations, a myriad of powers and forces for me to explore and discover.

The protagonist is someone I can really get behind, with poignant experiences, considerable competences and a lot of personal growth and revelations

The story promises to be exciting and action packed, with close emotional dramas, epic conflicts and world balancing feats that is interspaced by personal revelation and discovery

So much potential – but it was badly let down by the execution.

It’s very overwritten. There were huge sections of the book I was tempted to skim because they were overly descriptive, they gave background or side information that wasn’t useful, snippets of world insight that add too nothing and endless, endless pages of internal monologue that is repetitive and often goes nowhere except to reconfirm the same issues we have already seen over and over. I know Ashrinn’s issues, Liu’s issues, Mal’s issues – but we rejoin their headspace for long long chapters of little happening but following their thoughts as they cycle round the same issues again.

I think there’s a real attempt to truly establish these characters and the theme and atmosphere, but it loses me in a lot of really heavy text I could skip over.

Worse than being overwritten, this book felt like several books squished together:

Book 1: Ashrinn has his awakening moment, comes home and is introduced to the supernatural by Randolph, training in what that means, what he can do, what is out there and what Randolph wants to achieve with the Order

Book 2: Ashrinn, member of the Order starts to get things into shape, organising the order, fitting into his new life, some relationship issues with family and friends.

Book 3: Opening up to non-paladins/mages. Establishing and training Storm, getting the unit to work together, dealing with any issues between members and making them an effective, elite team.

Book 4: Battling the Cult, escalation, fighting the cult, cult avatar sets up, beginning of the war

If this had been the series, it would have been EPIC! But all of this happened in ONE BOOK. And on top of that we have pages of Ashrinn’s relationship with his wife, his son and lots and lots about Mal and his kids and the issues between Ashrinn and Mal himself that is just kind of pasted on the rapidly speeding story for more distraction and confusion. Many times I skimmed back in the book because I’d blinked and something had changed. Ashrinn meets with Randolph – BLINK, he’s now training a team. How did we get from A to B? Now the cults’ a major threat and the Order isn’t enough – how? Why? What? I don’t know – we just blinked through all the exposition. Then BLINK! He has a team and there’s a werewolf and he may have to kill her BLINK she’s a fully functional member of the team and BLINK the team needs to be trained to fight! BLINK team is trained now – wait, what, you developed the team into a fighting force in the down time?! But… BLINK zomg DRAGON! Wait DRAGON?! Where did the dragon come from? Why? BLINK, all out war, we’re losing pieces of Seattle! Wait, Seattle’s under attack? The whole country’s under attack? When did this happen?!

This continues throughout the book. There’s no progression, no leading from scene to scene, just snap shots from different stages in the narrative. It’s like we skip forward months of even years with each turning of a page, vast events and knowledge happens in those missing months and we learn nothing about it. I was constantly running to catch up, completely lost and frustrated by the awesome elements of the story that I never get to see!

Because it’s all crammed in there’s no time to develop any of these plot lines. I don’t know what magic, the realms, constructs etc means. Everyone runs around talking about shadowmancers but I only have the vaguest idea what they do – and one of the Storm team is a shadowmancer! There’s a member of the Storm team whose abilities I don’t really know or understand. There are elements of the world, the Order, the astral realm, the mage school which are mentioned repeatedly but I don’t understand. I don’t even know what being a Paladin MEANS or what they can do beyond having a shiny sword and throwing holy hand grenades. Ashrinn has a snake – which originally he was scared of then positively deals with and seems to be on his side. There’s just so much here that is not developed

We also end up with a huge cast of characters that are nothing but names and little else; there’s so little character development – who I often have to stop and think and even back track to figure out who they all are. I know nothing about Randolph. People keep mentioning Natalie and it’s only through a book search I remembered the Paladin with the birds. Rosi keeps being mentioned but it was only after a moment’s thought I realised she was one of Mal’s kids and not really relevant to the story. Then there were the gnomes who maybe were connected to the school? Or the hospital? I don’t know – too many names, not enough characterisation behind the names. I barely could keep straight all the members of Storm and that’s a crying shame because that team looked like it would have been immense fun to follow around

Even main characters – like Ashrinn himself – get little development. It wasn’t until half way through the book that we learn Ashrinn is bisexual (and it starts to go somewhere with this but we never have time to develop it because it has to move forwards!), we have no exploration of his Zoroastrianism except the odd, exclaimed “Ahura Mazda!”. Or Mal and his fae wife – what do the fae mean? Why? Or his sick daughter – it’s just there and never developed but supposed to have a huge emotional impact but it’s never really developed, again.

This also does a lot to damage the excellent diversity of the book. Ashrinn being half-Persian and how that had affected him his history and his experiences was beautifully alluded to – and more so than most – but again not really fully developed. His bisexuality and pursuing that was clumsy and truncated. His relationship with his wife was so brushed over that, between her and Mal’s wife, we had a set of awful, abusive or near abusive wives and mothers with no counter narrative. Jericho looked like an awesome character with definite examination of her race as Black woman, but we never spent enough time with her to develop it more than some comments on code switching and her using ebonics. Sonth is an Indian and I would have loved to see more of. There was some excellent foundation of some amazing inclusion but I wish everything was more developed.

Ashrinn is a disabled character – both physically and mentally after his experiences in the army, and this is an excellent portrayal. There is a lot of detail dedicated to his mental processes, his fear, his alcoholism, his doubts and frustration with his painful body – there are a lot of references and it’s well done.

This actually means we have a book that is both extremely overwritten and terribly under-developed at the same time. I was torn between telling the book to hurry up and demanding it slow down. It almost felt like someone had taken the long term premise of a full series, written the summary then padded it out with a lot of emotional unnecessariness. I had to fight to finish it and that’s just tragic continuing the potential it had. But it was a struggle, it was a real struggle and if I hadn’t resorted to skimming the last 50 pages this would have been a DNF. And this book is 500 pages long – but I still had to fight to force those last 50.

I’m so ANGERED by this book. The story, the characters, the world – this book was not just a 5 star book, this book was a 5 star series. I could easily have revelled in 6 books of 5 star awesomeness from this. It could have been epic. It could have been incredible. It could have been one of the cornerstones of my library! Instead all of this awesomeness was rammed into one book, huge chunks of it cut off then it was liberally sprayed with angst. It’s like seeing the best, juiciest, most wonderful cut of beef you ever imagined being forced through a mincing machine and slathered in ketchup. It turned what would have been an awesome book into something I struggled to get through, I almost want to send the book back to the author and beg them to create the excellence I just know can be extracted from this.

Should have been so much more!

A copy of this book was given by the author in exchange for a review
Posted by Sparky at 3:00 PM