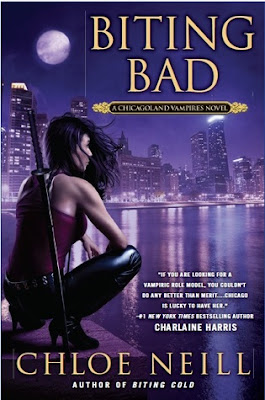 More drama returns to Chicago – this time in the shape of riots. Riots with firebombs targets that are close to the vampires – including their blood supply and Grey House. Naturally this threat has to be investigated and countered – as much as they can counter the growing anti-vampire attitude.

And the GP is suffering from its own conflict – Darius has had a blow to his authority and his chief rival has his gaze fixed on Cadogan House.

Whenever you have any kind of “whodunnit” or “whydunnit” mystery, you have a problem. There’s a problem between keeping the story going but at the same time not tipping your hand early. It’s simply hard to keep the pacing going while maintaining the mystery – it’s very easy for a book to become boring while everyone sits around frustrated, with no leads. At the same time, too many side plots can derail the plot and make the mystery seem almost background.

Biting Bad does a good job of maintaining that pacing. We have side plots – related to Grey House and the ill vampire which nicely tie into the overall mystery. And there are other side-plots –Mallory, Merit’s parents, the GP – that fit the idea that your whole world doesn’t stop to allow you to focus on one issue. That said, I think both the parents and the GP were rather unnecessary in this book and added nothing to the overall plot and, as explained below, didn’t make a whole lot of sense.

I can see some excellent hooks in this book – I see Mallory joining the house, perhaps Catcher as well and House Cadogan in general building a supernatural coalition its own way. I can see shades of them setting up their own organisation, especially considering the actions of House Grey and the GP. I like these hints of future action that don’t have to be spelled out, merely implied and suggested for future plot hooks.  That said, I found the ending frustrating in that the consequences of it were not shown.

In terms of Merit I think we have some improvements on some levels – her considerations about her relationships with both Ethan and Mallory (and even with other vampires within the House, like Helen) point towards some very belated character growth. Even her interactions with her family suggest we’re edging up to something resembling growth which is long overdue. She has some good ideas – both in the investigation and also with using the press to try and counter their negative image. The ideas are good but not genius – but at the same time no-one hailed her as the world’s most awesome tactical genius for her basic ideas as has happened in previous books. She has competent ideas, she was expected to provide competent ideas and her competent ideas were praised for their competence. It was nice to see.

The flip side is that Merit’s previous strength – her combat skills – were sorely lacking this book. Now, far be it from me to hold up skill with weapons as proof of a strong female character, but one of the main reasons Merit is Sentinel at all is because she is physically dangerous. It’s why she can spar competently with a man several centuries her senior. This is the reason for her rank – beyond her competent ideas and beyond the fact Ethan has the hots for her; she is sentinel because she is physically capable and because she doesn’t bow to Ethan. We saw neither of these things in this book. I can understand her losing to the GP – given his age and power – but being taken down by a human wielding a kitchen knife? Merit is better than that. I could take one comic disaster to have everyone laughing – but where was the counter moment? Where was the moment where Merit kicked arse and showed her strength?

But the main problem I have with this book is how some of the characters are developed and how that fits into the world – I either have trouble accepting them as they are or believing their actions. Some of these decisions could be explained if you extrapolate a whole lot of back story – but that’s not shown in the book and I’m engaging in mental gymnastics to justify the characters.

Primarily, I just do not get Ethan – or rather I don’t believe Ethan. He’s supposed to be 400 years old but he really doesn’t act like it. He acts young, he acts very insecure for his age and, in many cases, Merit feels more mature than he is. I’m particularly bemused by his somewhat deferential attitude towards Merit’s father rather than just turning round and pointing out who is the elder, the more experienced, etc. Why does Ethan constantly feel so… helpless, so out of his depth?

Which fits neatly with my not understanding Cadogan House. Ethan is 400 years old and the House predates him. Ethan has wealth enough to change cars – expensive Bentleys and Austin Martins – on a whim. Yet Merit’s father tries to invest in the house for a controlling interest? Just how much money does Merit’s dad have? And why isn’t Ethan turning round and laughing at the idea that he needs input from someone 350 years his junior? Why isn’t  he pointing out that Cadogan House, made up of several vampires who have been making money for decades (if not centuries) and its stock of discarded luxury cars is quite capable of buying and selling Merit’s dad 8 or 9 times over. And if this isn’t true then WHY does Ethan spend money so casually – and WHY isn’t it true?

I need some explanation as to why Merit’s father’s suggestion isn’t just laughable?

On the subject of motivations that baffle me – just what is the GP, supreme head of all vampires – actually trying to achieve? They are, after all, centuries old so I assume there’s a motivation behind their actions beyond “let’s screw things up for shits and giggles.” Their actions against Cadogan house from the very beginning have always been poorly explained – quite literally acting against the best wishes of vampires in general, not just the house. But this book – trying to force House Grey out on the street? A random GP member flying in from England with virtually no back up to attack a house full of rogues that most outnumber him several times over? Why do this? Why do any of this? It just doesn’t make sense without a boatload of explanation we don’t get.

And the mayor of Chicago, no matter what her prejudices are, is making excuses for people firebombing buildings? And how did the person behind all this even manage to organise such careful, precise rioting? It just doesn’t follow – is it even possible? Can you whip up a frenzied mob and then unleash them with military precision, make them target only what you want them to target, in exactly the way you want them to do so then stand down afterwards - AND ensure that all those swept up in the arrests afterwards keep shtum afterwards? Because that’s not how mobs work. The problem with this is it also rather ruins the mystery for me – the whole idea that the mystery is solvable falls flat when it relies on rather dubious action.

There are other issues I have with the book – there’s that perennial irritation “don’t you just wish we were human and could avoid all the drama!” which rather avoids the fact that, were Ethan human, he would be dead 350 years ago. It’s a pet hate of mine to have supernaturals that have a shed load of benefits to then bemoan their super powers. I can understand her being irritated by the drama they have to put up with – but trying to force a theme of Merit being tempted by a return to humanity.

There continues to be a general lack of marginalised characters in the book. We have a couple of POC, but they’re more mentioned than present and certainly not any kind of major character, by any stretch. This is exacerbated by the series continual appropriation of marginalised issues and “fantastic racism”.

One improvement we do have, though, is that there are a few more women hanging around Merit. Her fellow female guards are popping up more often, Mallory is on the redemption train and it’s clear that Merit has – or could easily have – a good relationship with her mother, sister and sister-in-law. I hope that these connections are developed more and become more prominent – the genre has too many female protagonists with few, if any, good female friends or social network.

The time line doesn’t work for me though – this entire series has apparently took place over a year. A year? That doesn’t really fit – it can’t all be crammed into a year. But one thing that does work from this – and help lessen the whole appropriation elements – is that Merit acknowledges that in that year humans have had to put up with an awful lot of supernatural weirdness and worry. Humanity has a reason to be wary of the supernatural in their midst.

In all this book has ups and downs, much like the series. I find myself liking the world, the stories and the characters and then having these flaws among all three that just don’t work for me. Everything is good – spotted with these big holes: plot holes, character holes, motivation holes that ruin the overall fabric of the story. They stop what could be a perfectly good (albeit not awesome) series from truly reaching its potential because every time I get into the story I fall down another hole.