The Walking Dead: The Problem With Michonne 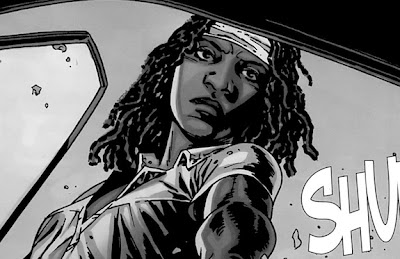 
She is known for her fearlessness in battle, her skill with a katana, her long dreadlocks and of course her all Black clothing. What little we know about Michonne’s background appeared in Playboy rather than in the traditional comics. Michonne is a character of action and she is regularly given very little dialogue. In a word, Michonne is taciturn.
In many ways, much of Michonne’s humanity has been removed. She doesn’t really get to have moments of self reflection, mourning, or happiness. Humans are very complex beings and if we were to sever Michonne’s relationship from the group and solely examine her by herself, her lack of nuance would be evident. Michonne couldn’t possibly be conceived of as an individual or even compelling because of the constant one note characterisation. Michonne only really gathers the attention of the readers of the comics because of the way in which she handles zombies, rather than her ability to show the whole range of human experience or emotion.


In some ways, Michonne is a superhero - in that she is entirely defined by her special ability - the ability to kill. But this would actually be a doing a disservice to superhero writers, since it’s de rigeur for superheroes to have some terrible tragic back story with lots of personal angst. Michonne doesn’t even get that - she’s not a superhero she’s a weapon, an embodiment of her sword.


Worse, she is a sword that is wielded by Rick, the White male leader of the group. There are innumerable scenes in the comics where Rick, when confronted by a zombie, just says “Michonne” and expects her to act. Yes it shows confidence in her, yes it acknowledges her skills - but it also assumes her obedience and doesn’t bother with overt acknowledgement or even requesting. Michonne feels almost like Rick’s attack and guard dog. Even in the TV show, Michonne had to prove herself worthy in a way the other characters never had to - only being accepted into the group when Carl agreed to her presence, after Michonne proved herself useful and willing to perform his dangerous task.


At one point we had high hopes for Michonne being further developed. There was a mini-series of her past before meeting the group and Michonne was opening up with various tidbits to Rick. It looked like we were going to see a more multi-layered, developed and emotional Michonne we were actually optimistic (yes, us, optimistic!)


Unfortunately it was not to be. Michonne opened up about her talking to herself, talking to her dead boyfriend; but she only did it to help comfort Rick and his hallucinations about Lori. This has an unpleasant parallel with the TV series where Morgan’s mental health was used as an object lesson for Rick - the mental illness of Black people is presented only to cast light on Rick.


Other than comforting Rick, her most common response is anger - whether it’s at the people of Alexandria for having such a normal life, or at Morgan for grieving for his dead wife. It’s more aggression, anger and lashing out from her, even with lovers. The moments when her shell does crack - such as in grief over Morgan’s death - are not used to develop Michonne, they are used to justify her silence.


And it’s not like Michonne hasn’t had more than enough reason for emotion - she’s lost her family, her boyfriend, her job, her life, she was brutally raped and tortured (gratuitously and unnecessarily) by the Governor, she lost two men she loved. She has had grief upon grief upon horror inflicted on her - but it doesn’t happen; we just see anger.


Unlike Andrea who was slut shamed by Donna for her relationship with Dale, Michonne is not actively slut shamed when she has sex. Michonne is, however, deemed “the other woman” for stealing Tyreese from Carol. In the end, Tyreese ends up bearing the bigger burden simply because it was him and not Michonne who was in a relationship. This lack of slut shaming does not mean there have not been problems with the portrayal of Michonne’s sexuality.  Though many of the characters have had sex in the comics, only Michonne is drawn in a revealing fashion. There are no sheets to protect her modesty and her body is laid bare for consumption. Can you even imagine them drawing a naked or even near naked Rick?  Allowing Michonne to engage in sex, and failing to slut shame her is pro woman but the comic loses its progressive stance by then sexualising her relative to the other characters. This is a problem. Though a naked Michonne makes sense in the context of her having sex, such portrayal does not occur with any other character, thus ‘othering’ her. A naked Michonne is not neutral.


One of the reasons why Michonne is hailed as such a strong character is because she is lethal. No-one can question her skill with a sword - there are few people in the group, either in the comics or on the TV show, who can match her combat skills. She is deadly, she is the point person for the group - she is always on the front lines and the lynch pin the rest of the group relies on in battle.


Unfortunately, as we’ve said before, far too often skill in weapons is seen as indicative of a “strong female character” perhaps because of an overly physical definition of the word “strong”. A strong character is one who is developed to be a full person, a fully fleshed out character with their own agenda, aims, personality and humanity; not an object, a tool or a hanger on. Sadly, a weapon is still very much a tool.


There’s still an impression of this trope as progressive because we have a cultural narrative of women as helpless, fragile, delicate beings that need sheltering, wrapping in cotton and keeping safe. The image of women being kidnapped and imprisoned, screaming for help - or swooning delicately onto fainting couches is still very much a major trope. And, yes, in some ways even the hollow character of a woman who can fight is a subversion of that.


But looking at this trope through this lens neglects how race and gender intersect. While White women have frequently been portrayed as delicate helpless children, or precious gems to be protected, sheltered and petted like fragile little flowers, the same trope has not been applied to Black women. Black women are portrayed as the ultimate “unwoman”, strong, beasts of burden, incredibly tough and enduring, angry, aggressive and “strong”. It’s not a subversion to show Michonne as an angry Black woman ready to unleash lethal violence - it’s a perpetuation of an existing societal meme.


In fact, positioning a Black woman as something precious and amazing worth fighting for, protecting and saving would probably be more of a subversion than depicting her as a weapon. Black woman as vulnerable (not victimised and enduring), as hurt, as needing comfort and protection and gentle nurturing would step far further outside of our societal narrative than a Black woman who kicks arse and doesn’t need anyone.


Ultimately, Michonne can kill every last zombie in the entire world, but it will not make her a true strong character until she is actually a character - a full character, a full person with a full emotional range. We need to see Michonne the woman, not Michonne the sword.