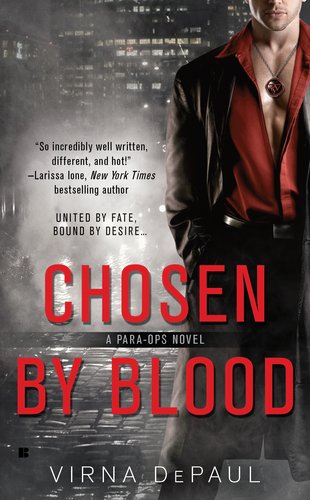 Chosen by Blood takes place in an alternate world where humans and supernatural creatures live side by side in an uneasy peace.  In an effort to reduce the threat of vampires during the second American civil war, humans created a vaccine which deprived human blood of the nourishment that vampires need to survive.  Vampires have a hard time reproducing and with their members now dying of starvation, it is imperative that a cure be found.

When dharmie (half human/half vamire) Knox Devereaux the leader of a small group of vampires is contacted by the FBI to join a an otherworld military group created specifically to hunt down a cure, he simply cannot resist participating.  The job comes with the added bonus of finally getting close to his soul mate Special Agent Felicia Locke.  As much as Knox wants to be with Felicia, he is driven to protect her.  With various supernatural creatures having a different idea of how human and otherworld relations should be, this mission might just bring an end to their love before it has a chance to grow.


Chosen By Blood is technically under the category of paranormal romance, though parts of it read like cheap erotica.  It really is a shame because the alternate world setting was absolutely creative and the novel could well have stood on its own with the forced romance running through it.  We are told that Knox and Felicia are soul mates but we really don't have a romance or an incident that draws them together other than lust.  The major spike in their relationship is that when they first meet, Knox is married to Felicia's best friend and though vampire culture has no problem with polyamory, Felicia is far from comfortable with it.  Polyamory is something we seldom see in these kinds of novels but I found that I could not embrace it simply because it was framed as something that is unacceptable and even otherworldly.  Monogamy in particular is posited as the right and only way to live.  In the end Knox gives up on the idea of serial monogamy for Felicia because he just doesn't want to sleep with anyone else despite growing up with Polyamory as the norm.

I know that Chosen By Blood is paranormal romance but I am tired of women losing the ability to think when the man they love walks in the room.  We get that you think he is hot and have been fantasizing with a vibrator for awhile but why does this mean that common sense has to fly out the window?  While it was great that Felicia is no shrinking violet and is more than willing to prove her skills her reduction to blathering fool around Knox.  This is especially true when we are given no reason for her absolute devotion to this vampire.

There are a few characters of colour but they largely fall into the role of supporting cast.  This is normally where marginalized people appear when writers deign to include us.  What I found problematic was the constant equation of the racism and oppression people of colour live with in a White supremacist state to the hatred humans have for Otherworlders.  Let's be clear, to a vampire we are food, to a werewolf humans are easy prey.  Any hate humans would feel for supernatural creatures is justified, unlike the racism and oppression targeted at people of colour. It was further irritating that legal equality in this alternate world for people of colour only happened 30 years ago and DePaul then had a White character bonding with a Black men over this because suddenly Blackness is less problematic when there are Otherworlders to deal with.

There were also no GLBT characters in this story.  When Noella made it clear that Felicia was her true soul mate, she was quick to declare that it wasn't sexual.  This is not to say that I would have wanted a closeted Noella or a case of unrequited love which is far too common but if you are going to bother to have Noella declare Felicia her soulmate why not make her sexually attracted to her as well?  Paranormal romance has a particularly bad record when it comes to including GLBT characters as though true love, sex and romance is something which is only the preserve of straight cisgender people.

Chosen By Blood could have been so much more than it is.  The setting is great but the romance just kept throwing off the main plot line.  The introduction was so poorly written that I had to go to Goodreads and ensure that I was actually reading the first book in a series.  You cannot just dump people in the middle of a ridiculous triangle without some kind of set up.  I appreciated Wraith who stole several scenes but it is worth noting that once again we have a female character who has been abused and tortured. At the end of the day, Chosen By Blood simply did not live up to its potential.