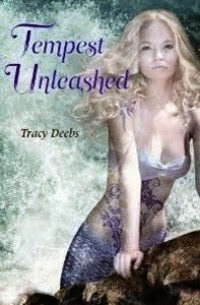 Tempest is not setting in well as the merfolk’s saviour. She misses her home, she misses her family and, most guilt causing of all, she misses Matt, her human ex-boyfriend. Something she hopes to keep from Kona, her Selkie current boyfriend – and a prince no less.

To make matters worse, she and Hailaine, merQueen, keep butting heads and can’t seem to agree with anything, least of all the many many things that Hailaine thinks she needs to learn.

But Tiamat is still out there and still plotting to take down both Kingdoms and dominate the Pacific – and Tempest doesn’t feel even close to ready to face her.

I protest most strongly to the name of this book.

Tempest Unleashed is a terrible description of the events recounted within. I propose a better title: Tempest Mopes. Or maybe Tempest Monologues. Or Tempest Naval Gazes.

For much of this book not much happens and there isn’t much pretence of a plot. We open with Tempest worrying about her human family (somewhat reasonable) who she had to abandon. Which quickly turns into worrying about Matt, which turns into worrying about Kona because blah blah love triangle, blah. She doesn’t get on with the merQueen because REASONS (more on this later) and this causes more musings. Then musings about whether she and Kona can ever be together.

New character Sabyn shows up to train her, he flirts with Tempest, he and Kona don’t get on, Tempest spends pages talking about this. There’s lots and lots of conflict with Kona over boyfriend issues.

Tiamat is in the background doing bad evil stuff which everyone talks about… but doesn’t do anything about.

An event eventually drives Tempest back to land where she… sits around and has lots of angsty arguments and discussions. I don’t think there’s much else she could have done in the situation, but it adds on to the general inaction that permeates this book to be incredibly frustrating. It would have probably helped a lot to see Tempest more deeply involved in training, seeing what she learned etc. Or maybe her spending more time with the merQueen, learning what’s happening in the realm, how they’re resisting Tiamat, training, making plans etc – at least then there would have been some actual concrete action taken by Tempest in the face of the overwhelming threat

Instead we had pages and pages of discussion, arguments and moping, discussion argument moping over and over again – I reached over half way and realised that absolutely nothing had actually happened in the book.

Finally the action hits, Tempest swims off, pulls a super power out of her arse and TA-DA day is saved. Does that count as a spoiler? Because, really, it’s pretty weak.

Back to the merQueen, there’s a huge rift between Tempest and Hailaine in this book and, beyond “Hailaine is an evil meanie” it’s not really explained. I think it’s supposed to represent how hard Hailaine has become from the difficult decisions she’s had to make as a queen – but she doesn’t actually make any decisions. In fact, the only indication she’s ever had to make bad decisions is a memory of Tempest’s mothers – so it can hardly be disagreement over the decisions Hailaine is making. It all seems even more bizarre since Hailaine is apparently grooming Tempest to replace her – so why the rift? Why the treatment designed to drive her away? I can see many ways there could be a rift – so show them! Rather than just have Hailaine be randomly unpleasant for reasons unknown, actually develop it. As it stands, the conflict seems to be there just so Tempest won’t trust her since that’s vital for the plot to work.

We have some POC in the form of one of her old human friends (he’s a name, nothing more) and her best friend under the sea is described as having bronze skin. She’s not a bad character, she has some banter back and forth with Tempest and she’s certain got some capacity and skills that exceed Tempest’s own. But she is a servant role – yes, a friend, but a friend who does whatever Tempest wants and we don’t really see except when Tempest wants/needs something – I’m not saying she is a bad character, but she’s more an add-on of Tempest than a fully realised character. Partly this is because of the book that focuses so much on Tempest’s eternal monologue that no character is especially well developed.

We don’t have any GBLT characters but, as is annoyingly common, we do have some gay jokes. Erase or include – don’t erase then pull this, it’s annoying. As female characters go, we have a mixed bag. Tempest has her best friend Malina and then all other women are evil and/or rivals which I wouldn’t mind with the Sea Witch, but the conflict with Hailaine is poorly covered to say the least; in between this we have lots of lashing out at Tempest’s dead mother. Tempest herself has excellent moments, refusing to accept Kona playing the protective boyfriend and not tolerating his and Sabyn’s fighting. She angrily, and excellently, counters his attempts to use words like “naïve” as a way to call her stupid. It’s really nice to see a lot of their interactions…

But, yes there’s a but… but Kona’s kind of right about a whole lot of things. She is naïve and inexperienced. She is spunky as hell, she does charge off on her own with no guards and rely on pulling a super power out of her arse to survive. This is kind of the definition of Spunky – she asserts her agency and challenges anyone who would restrict it – but they are RIGHT. I’m also dubious about her motivations – sure she didn’t sign up to be merQueen of the future or the great saviour – but when devastating calamity hits the merfolk there’s no way she’s going to look good by focusing entirely on her love interest. She feels very insular about who she cares about and who matters and it really makes me not only not like her very much, but also destroys any attempts of epic in the book. Sure, you may try to sell me whole kingdoms under threat from Tiamat, but all Tempest seems to care about his her boyfriend.

This leaves me in that frustrating place of kinda, sorta seeing some real potential in a book, but that potential being well and truly stomped into the dirt by the actual execution. In terms of world and underlying plot, there’s something there. But then we have Tempest who I don’t like and a writing style that spends far more time chasing internal monologue and Tempest’s many feelings rather than world building, character development or storytelling.