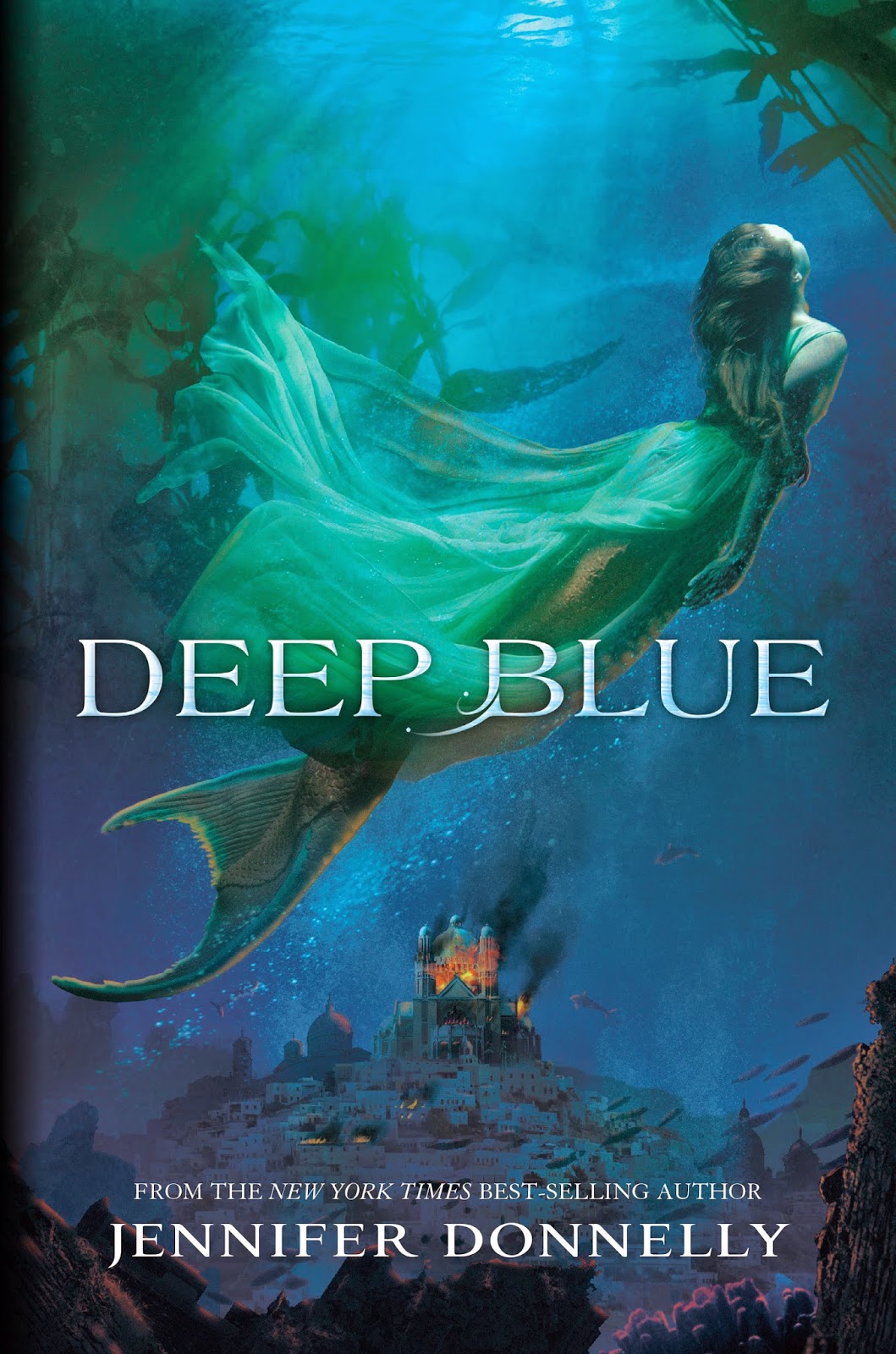 Serfina is a mermaid, the heir to the throne of one of the 6 merfolk nations and ready to complete her coming of age ceremony and meet her new husband

Until all out war breaks out in the middle of it. With her life, her city and her nation in ruins, hunted by barely understood, relentless enemies, Serfina flees with her best friend relying on very dubious and worrisome allies.

In the end, they have one hope – chasing an answer that spoke to them in a dream, speaking of 6 mermaids who have to come together to fight the threat.

The world setting for this book is really rich and deep setting. We have a long, detailed history, an origin story and a wide, varied political landscape that creates a very large, rich and diverse feeling society. This world is one of those worlds where a lot of effort has gone into the full creation, making it very plausible and very internally consistent. There are also a lot of hints that all of this world is going to be called upon and be relevant in the story – including the history and the politics – and it’s not just exposition for exposition’s sake. I think it may be the best underwater world I’ve ever seen in the genre – from the magic setting to the different political entities, it’s very promising.

Of course, while all this history and politics is fascinating and rich and well designed and mostly pertinent to the story, it is a lot of information that is expositioned at us a lot. I didn’t find it boring, but a lot of it I found excessive and unnecessary – especially in the first part of the book; lots of info-dump, little reason for it.

The story remembers it’s underwater most of the time – but not all the time – we still get moments where merfolk pour drinks from teapots and the like underwater (which I can only imagine would be messy – really, if your creatures are aquatic you can skip the whole drinking thing) or sweat, or things pouring or falling which probably shouldn’t happen.

The main character, Serafina, also breaks a lot of moulds. She’s a princess and knows to act it and is very aware of her responsibilities – even though she’s 16 and often feels overwhelmed. It’s also interesting how she works with other women. When the book began, she had a rival at court that was an almost classic Mean Girl and I rolled my eyes because we’d seen this play out so many times – and even a princess and heir to the throne has to be the unpopular bullied one… but this elements of the story was quickly left behind (which made me think it was rather unnecessary to be honest) and we got to the meat.

And in the meat she’s one of 6 young women working together all with their own talents and skills. 6 young women who respect and like one another, regard each other as peers and work well as a team – yes there’s conflict between Serafina and another but it has a strong basis in the story and even then she tries to work through it. Is she special? Yes, but they all are – each in their own way. It’s even emphasised that she’s not the most powerful of them – in fact “most powerful” doesn’t even apply in any logical sense since each of them have powers and abilities and talents that are very different from each other. And if Serafina may, possibly, be the most specialist of them all, it’s a slim claim – and it pales next to the true strength of the 6 is how they work together. This is a really strong emphasis on them being much much stronger together than apart and that co-operation is the key to victor. Each mermaid also has a chance to shine, a moment when they are the hero, when they save the others – just as each mermaid is equally in need of the help and support of the others. This isn’t the story of one mermaid and her sidekicks, nor 6 women who are fighting and snarling and competing with each other.

If anything, the lack of conflict between them is poorly done because these 6 women meet, understand and bond almost ridiculously quickly. They go from complete strangers to knowing each other incredibly well astonishingly quickly with little development or depth.

Each of these 6 has a recognisably different personality as well – they’re all individuals; but it has to be said that, except for Serfina, Neela and Ling, there isn’t a lot of development there. They’re introduced far too late and too little time is spent on them. This lack of development because of all the info-dumping and excessive description is a real problem in the book.

A number of the other characters are women as well – most of the main actors are female. Serafina has a fraught relationship with her mother- but she’s a matriarchal queen with high expectations. There’s an older, wiser but very powerful woman who gives sage advice – that is listened to. And the male love interest (whose mysterious story, it has to be said, seems painfully predictable) is an afterthought or side reference – definitely banished from their priority list with her home under threat.

On the whole, Serafina interests me. She’s not perfect, not at all. She has flaws and she doesn’t always make great decisions – but they’re for good, characterful reasons. She’s very young and isn’t impossibly perfect for a 16 year old on which huge responsibility is suddenly dumped. Over the course of the book she grows considerably – and I think we can expect a lot more in the future.

I mentioned above that there are several merfolk nations – these are analogous to many human cultures. The 6 mermaids come from different nations – and 3 of them are POC. Serfina’s best friend is Indian (or from Matali in the Indian Ocean), Ling is Chinese (or from Qin in the Pacific) and Ava           is Black and Brazilian (or from the Amazon river); half the cast are POC and with a point of having different cultures and customs beyond just labels. Ava is also blind which is an addition of a disabled character, though like so many blind characters she has a second sight woo-woo which largely renders her blindness non-applicable.

Unfortunately, there are no LGBTQ characters as is all too common. Also one of the main enemies is most likely a POC – but that makes him one of four POC in the book and the other enemies are not POC as far as they were described

There’s also a lot of issues touched on in passing – Neela struggles with her ambitions and talents that conflict with the decorous – and idle – princess she is supposed to be. Serafina balks at an arranged marriage. We have damaging beauty standards touched upon. There’s a lot of environmental references and considerations based on the damage humanity causes to the seas based on over-fishing and pollution.

This is an excellent introduction to the series, setting out the world and some really interesting characters. But it was an introduction – which means it was a little too invested in introducing all this too me – often through very big info dumps and long exposition - than it was in moving the action forward. I also think there were elements of the book that were unnecessary or we spent too much time on – I mentioned the childish Mean Girls already, there was also a point in travelling through mirrors that seemed to take too long or longer than it needed to. Some of the descriptions of the mermaids using their abilities also felt a bit too abstract and confused, leaving me somewhat at a loss

All the exposition was interesting, but the book didn’t move forward at a quick pace which is especially a problem since the emphasis is so much on desperation, time running out, trying to escape the enemy who have destroyed the kingdom and are hunting them down – the story is all about urgency, getting somewhere in time, escaping enemies – but the book itself doesn’t move at that pace. I feel if we had cut some of the exposition there would have been more time to spend with 3 of the main characters who really needed more fleshing out and development. The book dragged and was padded in the beginning, then rushed and lacked development towards the end – and throughout it all there was way too much infodumping

The book also can be a little… childish in its word use. Money being described as “currensea” for example is… well, a little silly. I can understand merfolk having different words for things, especially things that they would have no reference for, but some of it (“merl” instead of girl) just feels contrived.

So – conclusion? I like this – I’m intrigued and I’m in for Serfina’s story and these 6 mermaids facing off against what comes. I think this book was an introduction and I hope that future books won’t be dragged down by the shovel-loads of info-dumping that clogs this one. I think the concept is great but the execution is very badly lacking – but I have hope for how it will develop.