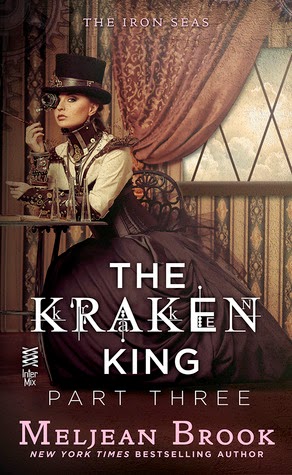 Zenobia, Ariq and company arrive in the dangerous Smuggler’s dens, looking for someone who can repair Connor’s legs and more news on the Marauders whose attacks risk enflaming the wrath of the Nipponese Empress

Ariq has to navigate the treacherous politics of the town to find the information he needs, while Zenobia is pulled by divided loyalties; and her carefully hidden identity is close to being revealed.

I don’t think I’ll ever get used to “episodic” novels – teeny tiny books each telling a few chapters. Books released as soap episodes or comics; frankly, they leave me frustrated every time I reach the end of them because I want more, I want the story to continue, I want the story to get going and not have these unnecessary breaks that just derail the plot and the development and stops me getting the full epic feel

It’s especially bad when we have a series as good as this one. I love Zenobia, she has such an excellent combination of strength and vulnerability – determination and fear. She constantly lives under threat of kidnap because of her brother’s antics and success but at the same time craves adventure and freedom. She’s practical enough to seek protection but frustrated by the intrusion it involves into her life. She’s sensible, snarky, strong willed and not willing to let even her growing feelings for Ariq, the Kraken King, overwhelm her responsibilities to her people. I like that she’s more torn about leaving Mara and Connor than she is about leaving him behind

The same applies to Ariq, while he is definitely growing to care passionately about Zenobia, she is not – cannot – be his main priority. He’s a leader of a people under threat, he has responsibilities to them. Even beyond that, Australia is facing a major threat and he’s not going to check out of that just because he has fallen in love.

This is so rare in any books with romance – for love to be meaningful there’s a prevailing idea that it must be overwhelming and everything else cease to be a priority. I love this subversion of that – that Ariq and Zenobia can feel lust and love but still say “no, I have responsibilities, I have other priorities, I refuse to drop everything for this.”

Ariq also has an excellent and insightful view when it comes to justice. He has fought and used his influence to increase justice in the dens and provides people with a way out of their brutal ways of operating – but he doesn’t force anyone to leave and knows that any uprising has to come from the people of the dens and not be imposed from the outside. He recognises the reality of helping rather than taking over or doing it for them. He also firmly stands against “end justifies the means” reasoning with both the rebellion and the one part of the Dens city that is adopting something approaching a fair system; burning themselves to the ground for the sake of a chance at something better isn’t sensible. But even in that he recognises the desperation and lack of choices that have drive this den leader to make a rather foolish, highly reckless decision.

When it comes to the world setting – I have to repeat everything I said about the first two parts, word for word. The different world, the different implications of what the Horde means, the differings of colonialism, the power and presence of the Australian Aboriginal nations as well as a diverse cast with Ariq, Mara and a huge number of the background characters all being POC is all truly excellent.

Sadly, that also applies to the continued erasure of LGBT people.

In terms of plot – it’s just too short! Ariq comes closer to learning who Zenobia is, but still isn’t there. Ariq learns a little more about the marauders who are risking the Empress’s wrath, but doesn’t go any further with it.

And, ultimately, it is this format that prevents me from adoring this book – because things begin to happen and it’s over. Things move on, but not far enough, things develop, but only in increments broken by these episodic gaps. On it’s own, it’s 3.5 fang book, when all 4 parts are released as one novel, we’re looking at 4.5 fangs.