Orphan Black, Season 2, Episode 9: Things Which Have Never Yet Been Done 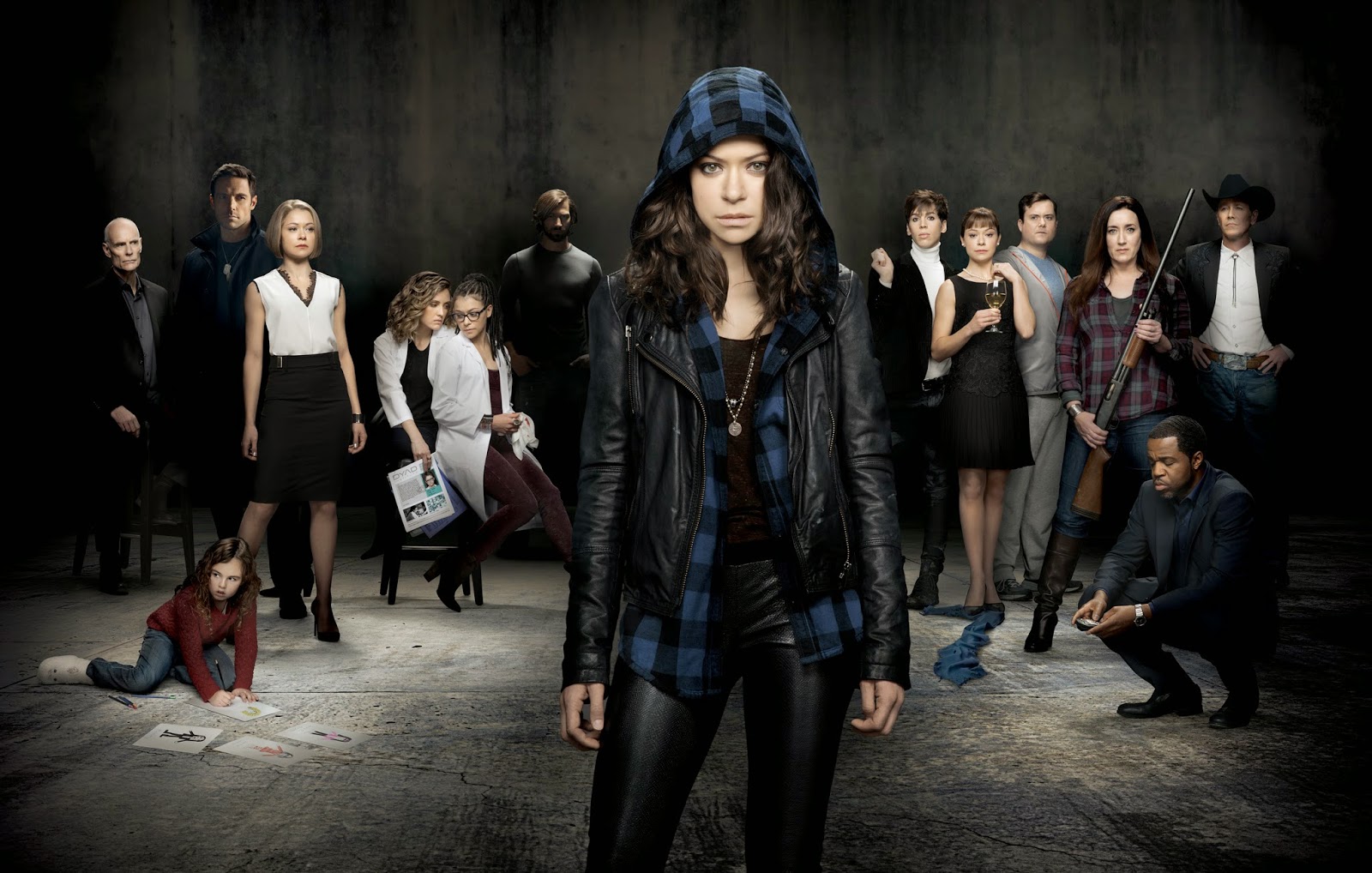 I want a new show – Allison body clean up. Yes, she and Donnie are still dealing with Leekie’s inconvenient corpse and while Donnie is a bit of a wreck, Allison steps up and gets it done. Because she’s Allison. It’s what she does. They put Leekie’s plastic wrapped body in a chest freezer (the greatest invention for body disposal since quick lime and the chain saw.)

At Dyad we learn that Cosima is still alive (she better be!) but Delphine tells Rachel how terribly Cosima’s doing and how desperate she is. They need Ethan to come up with a cure – and Kira’s stem cells to help delay Cosima’s decline before then. Rachel tries to convince Delphine – and, hopefully, through her Sarah – that Dyad is different and funsies now Leekie’s dead (uh-huh, because Rachel totally wasn’t behind the attempts to kidnap Sarah?). Delphine is cautious in quoting the party line, so Rachel throws in the totally-not-a-bribe-or-ploy offer: Delphine gets Leekie’s old job.

Delphine goes to explain all this to Sarah and Mrs. S and that they need Kira’s bonemarrow. Lots of suspicion on that one. No-one trusts Rachel, but Delphine is there for Cosima and thinks that Rachel has an equal reason to want this cure as any clone.

Skype conference! Allison, Cosima (she lives!) and Sarah skyping away (with Donny and Mrs. S in the background), these three have been too separate for too long! After catching up, Allison and Donnie learn that Leekie’s death has been covered up (Allison isn’t surprised given Dyad) – back to body disposal and Allison’s not impressed by Donnie’s ideas (she watches Dexter). Her idea is to bury Leekie under the garage cement floor.

And yes, Allison can use power tools. She’s Allison. And she’s not impressed with Donnie’s ineptitude. At least she had the good sense to leave HER dead body where she dropped (actual line, yes, Allison is awesome). To make things worse, Vic, the least necessary character on the show, shows up. He snoops around (while Allison is measuring the hole and the body – actually measuring. She is that meticulous). Donnie catches him and puts a gun to his head – he and Allison question Vic over the open grave for Leekie, with Donnie ranting and raving and sounding close to actually killing him… Vic tells Allison about Angela pushing him and snooping on her.

Donnie reveals the safety’s on the gun – he may actually be learning after his accidental Leekie murder! Of course, he leaves the option open to killing Vic on purpose and rather ominously says “this is how we take care of this family from now on.” He charges into Angela’s van points out that Beth Childs, the first cop involved is dead, Art is suspended for far less harassment than Angela has pulled – she doesn’t want to get involved. He warns her off and takes her picture. My, Donnie, I’m actually impressed. Yes you can look smug Donnie, you earned it.

They finish their body disposal and do a really good job of smoothing the concrete afterwards. Donnie draws a heart in the wet cement – apparently graffiti in shallow graves really does it for Allison and they have to get it on right there, on the freezer. And in case that didn’t suitably traumatise you, Allison “wants to be nasty,” (which, in her little world, means from behind.)

Sarah is torn with what to do – she wants to help Cosima (who Sarah calls her sister – and was that eyes down moment from Felix as close as this show ever comes to pointing out how little Sarah treats Felix like a brother?) but doesn’t trust Dyad; Mrs. S has a doctor friend who can help without them going into Dyad’s clutches but there’s a risk which Felix rejects. They all decide its best that Kira makes the decision – because she’s Kira and she’s smart and insightful and slightly creepy.

After they explain everything to Kira, she agrees to help, to help Auntie Cosima.

They meet with Mrs. S’s doctor and bring Delphine to them (Benjamin, one of Mrs. S’s minions) and everyone, especially Mrs. S, makes it very clear how little Delphine is trusted. Kira goes into surgery with Sarah holding her hand (and Felix holding Sarah’s) and even Delphine speaks up to reassure a very doubting Sarah (who is pulling out all the acting chops AGAIN).

At Dyad, Ethan explains everything to Cosima, including why they engineered the clones the way they did, as his notes are cracked. Now he can undoing the problem – but first he wants to make sure Dyad isn’t going to use his research to continue their experimentation (something Cosima seems to respect, even though it may cost her life).

Rachel and Marion meet to try and out alpha each other. Lots of subtext and false emotion while Rachel makes it clear she’s in charge and those “up top” can be sure of her commitment. Marion is very interested in the super special clone Sarah (with a little dig about Rachel not being super special despite being aware from the beginning. Oooooh nasty blow there). After the meeting Rachel goes to her scary, evil, high tech private cinema to watch her old home movies or herself and her parents. She smiles. She laughs. She cries. She berates herself. oookay, that’s almost as scary as Allison being, well, Allison. She cuts to pictures of Sarah with Kira before making ominous evil phone calls.

Speaking of ominous plots, she “accidentally” leaves an email open on Delphine’s computer that claims that Benjamin is a Dyad agent.

The Proletheans are back – and Helena is with them. Henrik injects the embryos from Helena’s stolen eggs into Helena’s womb. Everything seems bright and happy, but Helena looks troubled (and they’ve put her in a white nightie again. Is this just so she looks ridiculous if she runs away?). The midwife takes Helena to see the Prolethean pre-school/nursery which is swarming with kids (I get a vaguely horror movie vibe from the whole thing. But that could just be me and crowds of children).

Gracie watches with evil “I wanna kill you” eyes before going to pour liquor for the menfolk who can’t fill their own damn glasses before shooing her off. Exposition on Mark – he’s AWOL from the military and may have some PTSD. Then Henrik gets uber creepy – he knows Mark is interested in his daughter Gracie and he gives his patronising blessing for that – so long as Mark and Gracie are ready for Gracie “bearing fruit” (which would be creepy and nasty if this just meant “make me grandbabies!” – but it gets worse...)

The show continues its tradition of very inappropriate books for children with Henrik telling all the nursery kids the story of Frankenstein (albeit heavily edited). Henrik assures Helena that one day the room will be full of her kids (this is meant to be reassuring. Personally I would have caught at the whole “full” thing). Helena likes the kids – she doesn’t like the harsh way they’re treated by the nanny/midwife and grabs the woman by the throat (yes, I’m cheering for Helena), remembering her own harsh upbringing. She threatens to gut the nasty nanny if she lays a finger on the child.

Did Gracie just look slightly impressed by Helena’s championing of the little girl?

Gracie is the next in Henrik’s home-gynaecology lab and she is also injected with embryos - she doesn’t look happy about it – nor with being Helena’s fellow-pregnant room-mate. Gracie explains things to Helena – Henrik is the father of the children and the embryos in Gracie are Helena’s.

When Mark arrives, Helena is not pleased and throws some quality scorn “you love her life puppy, but you let him make her brood mare.” Mark asks Gracie to say how wrong Helena is – but she turns her back.

Helena gets up in the night, telling Grace she doesn’t belong there – she’s going to her sister. She also tells Grace that she’s a good girl but if she doesn’t want Helena’s babies, she shouldn’t have them. Grace denies that’s an option – but decides to go with Helena. But as they try to escape, they run into Henrik with a shotgun – Grace defies him, but he hits Helena in the head and drags Gracie away by her hair and locks her in a cell, all she can do is scream her hatred at him. Mark arrives and Henrik tries to control him – but even Mark has to crack on this one; Henrik putting his own child in his own daughter is apparently a step too far. He and Henrik argue – and Helena grabs Henrik from behind (Henrik, Helena has been shot and keeps coming – a blow to the head won’t even slow her down!)

Mark frees Gracie and they both see Helena choking Henrik – she tells them to run and they do.

Henrik wakes up tied to the gynaecology chair, his feet in the stirrups and he’s not wearing trousers. Helena is there, with both his human samples and all the semen he uses as a vet on the farm as well. She also has a pipe, because, well, Helena. She gets a great big needle and inserts it – he screams, she laughs.

Helena runs from the Prolethean farm – or what’s left of it, because she also set it on fire. This is why you do not mess with Helena.

Back at the hospital, Delphine arrives in the dead of night to warn Sarah about Benjamin. A Sarah goes back in saying vague things about Rachel making a move to Mrs. S and sending her to the lifts, but her body language and accent are of… it’s Rachel! Rachel pretending to be Sarah! She injects a drug into Felix’s neck

When the real Sarah arrives, Mrs. S realises what happened – but it’s too late, Kira has been taken.

At Dyad, Delphine tearfully tells Cosima what she did

Kira wakes up in a bedroom with Rachel who basically tells her she’s going to grow up just like Rachel did.

Kira being given the choice whether to help Cosima is interesting – on first glance it seems odd to let a child make such a medical decision – but it is her life and she has shown and awareness well beyond her years. But it also contrasts well with one of the ongoing themes of the show, so shown with Cosima’s “I am the science” rant. With Dyad and the Proletheans both infringing on every ounce of privacy and body autonomy the clones have, it’s glaring that a child is actually given greater control than they have. And understandable that consent and agency would be something in all the characters’ minds.

To drive that home, we have Gracie as well – abused, brainwashed and treated as a walking incubator by her father. Who in turn is fathering his own cloney descendants in his terrifying cult. A cult that has been designed to remove agency and choice from the beginning – the way the children are controlled, the way Gracie is still abused, even Mark who appears to be vulnerable in his own way. It’s all power and control from Henrik – perhaps even indicated by him splitting from the greater Proletheans.

I really hope Helena killed him.

Allison is just… terrifyingly awesome at hiding bodies. I’ve said it before and I’ll say it again, Allison is the scariest clone.