Penny Dreadful and the Avoidance of LGBT Characterisation 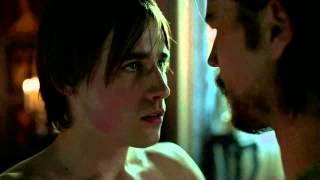 Penny Dreadful recently had a scene that made me and quite a number of the rest of the audience (judging by the internet reaction) trying to climb through the screen and then doing a little happy dance (which I will deny ever happened. Under torture). In Demimonde, Dorian Grey kissed Ethan Chandler. I don’t think anyone expected it

Rather gleeful at 2 main characters in a show being bisexual and one of them definitely challenging a lot of tropes that dog bisexual men and any men attracted to other men. I was impressed, surprised and eager for more.
Silly silly me. Whenever I get up my hopes, something arrives to scupper it - this time an interview with Reeve Carney talking about his character, Dorian. After all of that excitement about Dorian kissing Ethan he had the following to say:


I think it’s a response to a numbness within. He has to continue to take things to the next level and create more extreme, heightened circumstances in order to feel things that he once felt…Dorian has done so much and has been through so many modes of expression in terms of sexuality that he has to take it to the next level every time.


I wouldn’t put him in any category or label him in anyway, which is interesting to play with a character like that. It’s great to be able to work with that, but it has nothing to do with sexuality. And, I’m not sure if this is a good thing to say, but it’s almost like someone who is a cutter. It’s not about the cutting, it’s not about that. It’s about wanting to have some physical manifestation for what you’re feeling on the inside.


I’m beginning to think of these little behind the scenes revelations as the “No Homo Interview.” Kind of like a reverse “word of gay” (there a creator assures us that a character was gay/bi, honest even if they doesn’t show anything on the show/book - see Harry Potter and Star Gate). Why is it so hard to just say “yes, this character is bisexual.”? Why does there always have to be the asterix added? The proviso, the excuse, the “not really”, the quick pull back, anything other than admitting a character may want to have sex with someone who isn’t the opposite gender? Anything other than a main character admitting to be any kind of LGBT? Why do we actually have the actor feeling to need to say his character having sex with another man is nothing to do with sexuality? I’ve seen some straightwashing before, but straightwashing an actual gay sex scene (well fade to black) is pretty up there.

To rub salt into the wounds this is a really insulting way of referring to any kind of same-sex attraction. By wording it this way, we get the impression Dorian is straight (and may the ghost of Oscar Wilde plague your every night with extremely cutting witty put downs) and is having sex with men because of boredom. No, because it’s an ultra extreme kink! It’s the “next level” of depravity for the jaded to pursue, nothing to do with actual sexual identity or attraction. Not only is it a kink, it’s a form of self-harm akin to cutting; an indication of the pain inside him.

Well, damn, who would have thought you could destroy a scene that made me so happy so bloody quickly?

Of course, this isn’t the first time we’ve had this - Da Vinci’s Demons is legendary for its straight washing and making sure those dreaded LGBT labels don’t come anywhere near the protagonist, even with a same-sex kiss.

But even shows that are more overt and present with their LGBT characters seem to have the same horror when it comes to LGBT identity - has Bo in Lost Girl ever referred to herself as bisexual or similar? Has Lauren ever invoked the word Lesbian?

This isn’t exclusive to TV shows by any extent. Many books play this game as well - major characters potentially or actually having relations with the same gender but running scared from actual identifiers (often playing the rather insulting meme of “we’re just not defining because it’s so limited!” never mind the huge amounts of straight definition we see all the time, or the insult these straight authors are delivering LGBT people). The Anita Blake Series bends over backwards to avoid the main guys in Anita’s harem being anything but straight, while still keeping the hawt mansex. The Maker’s Song series loves lots of homoerotic tension but leaps back from anything resembling an LGBT label. Glacial Eyes goes for the whole “labels are baaaad” meme along with Armored (but not for the minor character, only the potential love interest) while the Nikki Glass Series has a totally straight guy whose woo-woo makes him hit it with guys now and then, honest. The Walker Papers, Intangible and Mist all still to the ambiguous hints without confirmation and the Wicked Lovely played do-si-do around Irial and Niall maybe, possibly, kind of, sort of could be bi, maybe for far too damn long. And I still don’t think they actually used that word.

What is notable is that many of these media are happy to use more overt LGBT identifiers for background characters, one-off characters or otherwise minor characters but when we get into more involved characters or the protagonist then we start seeing the asterix creep in, the provisos, the careful side-step. For these more major characters, the potential for same-gender attraction is possible (often with provisos or shading), actually kissing or even having sex with the same gender can even happen. But actually being gay, bisexual or any other identity under the umbrella is just a step too far. We’re more likely to see homophobic slurs thrown around than we are to see the language of an actual claimed identity.

Why have we reached a point where a few shows will show attraction and even sex between people of the same sex - but only if it's something straight people are doing? Or, at most, something indulged in by people only when they're careful to avoid any LGBT label? Why is LGB affection something characters (straight characters, even!) do, rather than what the characters are?


Together this all feels part of the overarching trope of “not too gay/bi”. The idea that we can get so far with inclusion - but then have to slip in some sugar to let the straight people swallow this bitter medicine. Sometimes it involves having a gay or bi character who is completely abstinent (or any sex they have is very much off screen), sometimes a character will announce their bisexuality. Once. Never to be spoken of or seen again.


And sometimes we’ll have characters be heavily implied to be gay or bisexual or have them kiss people of the same gender and even have sex with someone of the same gender - but always have that little asterix thrown in somehow to say “but not really!”