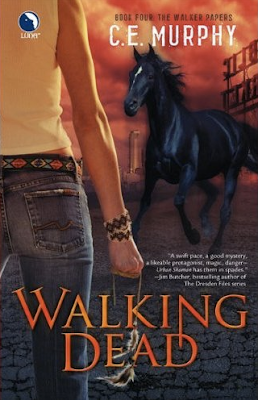 It’s hallowe’en and Joanne is facing the walking dead. And the ghostly dead. A big cauldron that brings back the dead. And mediums who talk to the dead. And even Cernunnos, a god of the dead swoops back in for a visit and a rematch

There’s a lot of dead around which for Joanne, shaman brimming with life magic, it isn’t really her area of expertise. Thankfully she has good friends who are there to support her – but even that is fraught with her uncertain love life and friends learning the true extent of her abilities.

With the dead coming from all sides there’s a lot to handle, but they all come together in one, epic confrontation – with lots of zombies, ghosts and zombie squirrels (and even Joanne draws the line there) along the way

One things I loved about this book is that it managed to keep its feet on the ground.  This series has a habit of Joanne jumping into flashbacks or spiritual quests or different realms of existence and generally completely losing me. This story kept it much tighter – she still went into her internal garden and the Dead zone – but we were much clearer about when and where she was going (and why) rather than having random spiritual confusions inserted throughout the story and leaving me lost. In fact, the writing was generally very tight not just compared to previous books in the series but also in general. This story has multiple plot lines – the ghosts, the zombies, the murder, the Wild Hunt, the Cauldron; while they are all related and touch each other frequently, they’re also very separate threads. There was an excellent balance maintained between them, none were neglected and none overwhelmed the others. I was never left confused as to what was happening when we returned to a storyline as can happen (sometimes a thread is neglected for a while is returned to – but by that time I’ve completely forgotten who these people are or what’s happening in their lives).

I also found each of the storylines integral. I admit that while reading it I did think the Wild Hunt’s appearance seemed awfully unnecessary and just a way to try and bring some of the older books to the present, but it really fleshed out as a storyline and then interwove really well with the other plot lines. I thought it was going to be a distraction but it merged excellently – I know I’m going on about it but I really have to praise how the writing of this book worked bringing all the disparate elements together, especially after the last few books which rather floundered.

The world building continues to be vast – but, again, focused. There’s a lot there and a lot of development that is constantly alluded to but it isn’t abstract or a distraction. We’re also getting a greater sense of a meta-plot with a big bad raising its ugly head. I feel the series is getting into it’s stride now. Also the undead are interesting – especially the stinking, icky zombies that terrify Joanne (it’s nice to see SCARY zombies in Urban Fantasy – dystopians manage it, but zombies tend to be low down the food chain elsewhere)

I do like that this book is dealing with issues that Joanne has not caused – whether directly or indirectly – and it allows for Joanne herself to develop without the constant guilt and self-recriminations that have plagued her for 2 books. She still has some details with that – which is great in an evolving character, but she’s not stuck in that rut any more. I’ve always liked her as a very real character – her complex history, her examination of both her Cherokee and Irish histories, her fraught relationship with both parents, her past pregnancy – they’ve all been fraught and difficult without being so completely overwhelming and angst laden as we so often see. It is a lot of issues and she could probably do without one or two of them, though. I think she does learn and grow – maybe not always as fast as I’d like but she does. I think I’d like to see her be competent more – she’s not exactly incompetent but she’s always flailing with misunderstanding and ignorance even after what she’s learned – and it’s starkly contrasted with Billy’s calm, cool knowledge. We do get moments like her healing of Tir Na Nog but, again, it’s a whimsical, spare of the moment decision she’s not sure will work and could kill her – there’s very few situations where Joanne can step forward and say “I know this, step back folks, I’ve got this.”

She is also very funny and terrified of zombie rats – which is wonderfully humanising and she does work through the fear, even if she doesn’t lose it. A strong protagonist doesn’t mean she has to be fearless nor does it mean she has to be the big stoic super-woman in the face of fear.

I actually really like the romance. Not Thor/Edward, that was never going to work – but between her and her boss. It’s one of the few “I’m in love with you but you drive me up the wall” romances I’ve seen that actually work. And I like that, despite her extreme attraction to Morrison, she doesn’t make him a priority and she took her promotion, her career progression and her ability to help people ahead of pursuing the relationship.

What she does need is some other female characters that aren’t back seated. Her closest friends are Billy and Gary. Then she’s got Thor/Edward her love interest and the Captain (her really real love interest). The female characters generally have much smaller roles (like Billy’s wife, Melinda, or Phoebe or the detective from missing persons) and/or are feel linked to this book rather than the ongoing series.

As the other women in the show book don’t have a great role, the same holds true for POC (since they’re largely the same). Further, Joanne herself spends much less time on the Native American side of her ancestry in this book, and considerably more on the Irish side – though last book was the other way round

This book comes close to making odd potential GBLT inclusion moments – then quickly turns round and runs away from them. Take Phoebe, her friend and fencing instructor. Now there have been, through the series, repeated hints that she could, maybe, be a Lesbian. But only hints (and if she were that makes her a Lesbian BFF which, while not as common as a GBF, is still not ideal). Like this book – Phoebe is referred to as Joanne’s “Sapphic sidekick”.  I thought “aha, confirmation!” but, no, they’re referring to their hallowe’en costumes and Phoebe has pushed Joanne to dress as Xena so she can dress as Gabrielle.

Then there’s Billy, the cross dresser who she always made a point of saying identified as a man, but when she see’s his inner self she describes his appearance as “feminine”. What does that mean? He likes old fashioned, ornate frilly shirts and is “more delicate” – namely, he doesn’t picture himself as being as big as his 200llb 6 foot self. We have the “feminine” and then a description that suggests that just means he doesn’t see himself as huge as he actually is and has a liking for antique fashion.

I keep feeling like the series is sneaking up on GBLT inclusion – then turns round and runs away.

In terms of writing and fun, I think this book was immensely better than the last and restores a lot of my hope in the series. There’s more I’d like to see – inclusionwise and the growth of Joanne’s competence and expertise, but the writing and characterisation is excellent, the pace much better and the overall book was one I had trouble putting down.