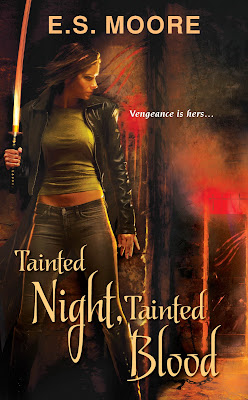 Kat Richardson, vampire, Lady Death is on the hunt again. Another Fledgling House has stepped above and beyond the sadism that is so common among the vampires and needs putting down.

But when she arrives, someone has got there first. Every wolf, every vampire in the place has been brutally slaughtered. Worse, so have the innocent Purebloods kept as prey. To complicate things, this isn’t the first mysterious slaughter and rogues have been dying across town – and Kat, Lady Death, is the one who is being blamed for the indiscriminate slaughter.

Forging an unlikely alliance with both her old associates at the Luna Cult and a highly reluctant cease fire with Adrian’s rebels, Kat sets off to find the real killer and put them out of action. But along the way she finds herself pulled into a demon bargain, discovering a mysterious town that breaks all the rules and facing the terrible truth about her brother and what really happened to him.

This book explores and expands a lot of what we have been introduced to in the first book. We see more of the taint and a lot more about the effects of werewolf and vampire blood mixing. We have further exploration of the idea that the night is completely lost to humanity, areas where humans will risk death and even humans not daring to turn on lights at night for fear of being noticed and attacked. But at the same time the hints of humans fighting back (like supernaturals not being safe in hospitals because the staff may kill them in a weak attempt to regain control).

We get to see more of Adrian, confirming that the rebel Luna Cultists are going to be a major aspect in the series. Kat’s developing relationship with Jonathon is intriguing and would do a lot to challenge her world view on the monsters. We finally see Ethan’s demon and there’s a lot of power in how its described and the potential that

We have a lot of the action that makes this book work so well. The author is very good at writing combat and I do like a good fight scene, I do. Neither over nor under descriptive, and flowing with a nice neat action-packed pace, they really work.

We also have some excellent plot hooks for the next book – the demon bargain, the unusual and strange sanctuary of Delai, seemingly untouched by the vampires and werewolves that rampage everywhere else. There’s Kat’s relationship with Jonathon and potential fallout over the deaths attributed to Lady Death – while it resolved all the storylines in the book, there’s a lot left to draw me on to the next one.

But then I hit Kat Redding herself. Kat has 2 emotional settings 1) angry and 2) angsty. That is the entirety of her emotional range. And angsty is most certainly her default setting. Yes, having a vampire character who is unhappy about being a vampire for perfectly legitimate reasons made for an interesting read and concept. But there needs to be more to a character than her desperate, self-hating torture, her desperate, self-hating tragic past and her desperate, self-hating guilt fits interspaced with lashing out in anger because of her vampire aggression (and then succumbing to more desperate self-hating guilt because of said lashing out). In terms of character development, there is none – because this is all Kat is in this book and pretty much all she was in the last book (at least then there was some questioning about her treating the Luna Cult as people rather than monsters). Whatever scraps of other personality Kat may have is lost among the reams of angst

And it’s angst written in the worst way. Not shown, not with constant side references, not with poignant and carefully alluded to grief and pain which carry so much emotional impact. No, we have epicly long internal monologues while she snarls at friends and sulks in her room or sulks in a diner (where she disappears to without telling her worried house mate where she’s going). And they’re constant, something will happen, she’ll have a conversation and at some point we will have a paragraph about her epic sadness and pain. If you removed her internal monologues of pain from this book, you would reduce it by about a quarter, maybe more. There are literally pages of unbroken angst repeated over and over.

It’s not that she doesn’t have a reason for his pain and sadness – she certainly does with her brother’s situation, her dead family and her constant battle with her monstrous nature – but it’s not just the defining characteristic of this character, it’s the only characteristic. She’s a weapon who is perpetually sad, not a person. Grief and pain are understandable but this book, this series, is overwhelmed by it – and this is happening in a genre which is, frankly, already seriously over-saturated in dramatically angst ridden protagonists.

if you must have a character who is suffering from so much emotional pain – and I’m not saying you shouldn’t – then have a care that their pain doesn’t overwhelm the book, show don’t tell, less is more. It’s far too easy for a painfully sad and tragic character to cross the line into a melodrama.

I’ve said a lot about the angst and that’s because it really is the deal breaker on this book, it is the main thing that stops this book being awesomely good rather than its current status as passably good. It’s one of the endless frustrations – a potentially awesome book that is brought down by one unavoidable problem.

It does have other problems, certainly. Like her suddenly-out-of-nowhere attraction to Jonathon. I’m not against it, certainly it would be a relief to have a break from the angst, but it was sudden and abrupt.

There’s also a major problem inclusion which, like so many books in the genre, has absolutely no real GBLT characters, the only suggestion of a drunken woman who made an unwelcome pass at Kat in a bar. It has 2 POC – an Asian doctor who is just that - someone to patch them up – and Pablo, the angry Mexican who returns, apparently waving his flag because I have no clue how else she knows his nationality. This erasure is exacerbated by there being a fairly substantial cast of characters, especially if we include the walk on roles and the bit characters.

Kat moves in a very male world. There’s Dr. Lei (who barely exists), 2 apparently intimidated and frightened women in the odd town of Delai and a female villain. Most of the rest of the women – and there are several, are presented as sexual and foolish (prostitutes, in bars dressed revealingly and even smelling) and Kat has a lot of contempt for them. There are no other male main characters, Kat has no female friends and no real female contacts and has a low opinion of most of the women she meets. It’s a very strong example of the “exceptional woman” trope, made all the worst by the fact the only exceptional thing about Kat is her vampire-based super-fighting skills.

There’s still a lot going for this series – it still has vast potential. But to be fully worthy of it, the protagonist has to become a fully realised character and grow into the world she is in. We have lots of plot hooks for another book, I will be reading book 3, whether I enjoy it or not is going to depend on whether Kat is developed or whether she’s still stuck in her angsty rut.