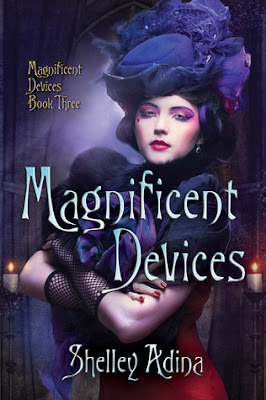 Lady Claire Trevelyan is making her way across the Atlantic to the Americans with her flock of adopted wards and Lord and Lady Dunsmuir; thereby escaping forced marriage to Lord Selwyn and his dastardly plotting.

Unfortunately, they run into air pirates over the Americas and quickly find themselves at their mercy – and Claire’s little flock is separated. Ransoms are demanded and Claire and her charges must try to escape and reunite in a harsh, lawless, unforgiving land.

And then Lord Selwyn rears his ugly head again. After his theft of the device he’s seeking to make his own nefarious deals in the Americas – but he hasn’t given up on Claire either and will use any scheme he can imagine to force her to marry him.

Yet more excellent fun with Lady Claire! I love these characters, love this protagonist and love this world. Much of what I’ve said about the previous 2 books in the series applies here as well. These books are immense fun. They have a glorious Steampunk feel and aesthetic – including a perfect use of language and etiquette to get that ideal Victorian feel, and the immense humour potential that comes with it. There’s something so amazingly fun and funny about these so-very proper people being swashbuckling heroes.

The setting is really vivid, it’s extremely well described without being a clumsily long winded and it’s very different from both London and the world we expected. Replacing the civilised, proper settings of the city for this rural, frontier near-wilderness was a big change but the book pulled it off magnificently.

I think this book has a slightly darker, more serious cast than the previous ones. Because the flock is split up, Claire is frequently worried for the lives of her charges – which is a stark contrast to her usual worries and concerns in previous books. Their manoeuvring and adventures take on a much starker and more serious cast when you have missing children you care for, or when you are trying to face down a pirate who has frequently threatened to kill you. I think it’s good that the tone did become more serious because of that – the relationship between Claire and Jake, Tigg and the Mopsies is far too powerful and meaningful for menaces against them to be seen as light and funny.

The writing maintained its perfect pacing though – the action kept moving forwards, the characters were still incredibly awesome and the fun was still there in immense quantities. The darker, more painful emotions fit into the story seamlessly, there was no jarring change of style nor did the author flounder with the different tone and the extremely different setting. Was it less fluffy? Yes, I think it was – but it was still immensely fun.

And it’s still one of those books where you really feel for the characters – I can think of no greater testament to the realness of them than that. Reading this I was enraged on Claire’s behalf at her treatment by James Selwyn. It’s one of those books that is so well written that you feel for the characters – and share their outrage and their anger.

We do have several POC in this book which in some ways is a step up but in other ways is highly problematic. I do love that Tigg, the able and excellent engineer is clearly a man of colour. He’s skilled, capable, reasonable and lacking the often ridiculous decision making of his peers. Despite that I can’t help fight the belief that he doesn’t get the screen time that the Mopsies and even Jake does.

We have a crew member, Yau, who is Asian; he’s a nice character without any overt problems (especially the lack of an awful accent which is all too common) until he breaks out the Judo. Even aside from  the stereotype of Asia = must know martial arts, Yau is a Chinese surname, Judo is a Japanese martial art. It was also only developed in 1882 – the books are set in 1889, so it’s possible but it squeaks by when an older (and Chinese) martial art would have been better.

And we have some Native American characters – 2 lads we barely see how help the kids, and Alaia, woman who feeds them, looks after them, heals them and drops endless amounts of woo-woo and mysticism. I don’t think she had one conversation without mentioning the Spider Woman.

It’s a shame, I want to praise the extra POC characters, but they all carry tropes with them we could have done without. There remain no GBLT characters

I do like the development of women in this story. Firstly, there’s Claire who is, as always, an awesome character. She is intelligent – fiercely so – she has a lot of common sense, she’s wilful without being spunky with it. She’s determined, she’s extremely brave, she’s fiercely loyal, she’s resourceful and she’s extremely capable. She knows what she wants and she’s not willing to backdown on that, she’s not willing to bow to societal pressure, she’s not ready to cave to the demands of others and is not only willing to stand up to the villains but also her allies if she has to. All this without being able to fight – she can point and fire a gun – but has no notable fighting skills. She stands up to people knowing she isn’t physically capable of bringing them down. She’s also not  perfect. When the Mopsies annoy her, her temper does fray. When things get overwhelming she is overwhelmed, she becomes upset, she cries, she actually has to lay in her bed and recover from heat stroke, she gets them lost and nearly killed trying to find Santa Fe, she has moments of despair and worry and fear. She’s strong because without being perfect, flawless or superwoman.

Perhaps most special of all is that she isn’t unique, she’s not the one super woman Lady Dunsmuir can and does use a gun and expects to do so (though she does become overcome – but it’s in worry for her child more than “oh it’s all just too ghastly!”). Alice is living a difficult life due to her criminal father and his expectations – but she’s still good and willing to challenge him even at great personal risk. She’s brave and, again, capable, skilled and intelligent in her own right. Not only that, but she and Claire even get along and become friends – strong female characters who DO NOT HATE EACH OTHER! I am quite overcome, someone pass me Lady Dunsmuir’s fainting couch (not like she uses it). Even the Mopsies are wonderful, strong characters.

And they do have to challenge the eternal paternalistic sexism of Lord Selwyn and his nasty associates. Claire realises that Fremont never speaks to her, always directing comments in the third person and she objects to being called “missy” and makes a point that she’d rather be intelligent than lovely.  We also have some counter messages from the men - when escaping Claire suggests that she and Lady Dunsmuir hide but Lord Dunsmuir is surprised and asks if they can use a gun – he fully expects the women to participate. We have other good messages like Claire regarding “dollymops” (prostitutes) with respect – not contempt or derision.

We do have some more side-references to class and the strictures of it. While there is less analysis and depiction of poverty, Lord Selwyn remains untouchable not just from justice but also from Claire’s and Andrew’s accusations because he is a lord. She is bound by strictures of etiquette, he, being a commoner, would never have his word taken against Lord Selwyn.

This is another immensely fun book in an immensely fun series with some excellent anti-sexist messages, a wonderful main character (one of my favourites in the genre) and a great sense of Victorian style and language that’s both fun and beautiful to read. It’s, perhaps, not quite as light as the others, not quite as fluffy – but every bit as fun even with some steel – or iron, rather -  added in. This series just keeps on going and going.