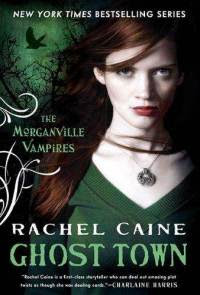 Morganville has changed a lot extremely rapidly and it is still, in many ways, reeling from what Bishop did to the town and the after effects, including the human residents of the town demanding a far greater level of protections while a faction of vampires resents the greater aggressiveness of humanity. It’s a delicate balance

It’s even harder to maintain with the destruction of Ada, the computer that managed to boundaries around Morganville. Without the shields and the portals and, most importantly, the field that erases humans memories when they leave, Morganville is now vulnerable and the vampire’s control is tenuous.

Tensions flare still higher when violence leads to an actual coup and the return of draconian punishments the vampires had supposedly abandoned, completely ignoring the human council members.

Then the badly damaged computer starts messing up – and it’s not just the memories of people leaving that it tampers with.

This book follows the pattern of the last book in fixing many of the issues that so characterise the Morganville vampire series.

Firstly, Claire is fully involved in this story. She is involved from the first page, involved in trying to find a solution and involved in implementing the solution – the protagonist is an active participant in this story. And she isn’t an active participant because she has decided to meddle and what everyone needs is a clueless 16 year old flailing around for no good reason. It is actually reasonable for her to be front and centre in this campaign, she is the one with the knowledge and the skills, she is the one who is best able to actually confront the problem.

And her motivations and reasoning are sensible. Initially we have to ask why she’d support the vampires, but the memory loss makes it personal. But more, she sees the nuance of the volatile situation and the risk of the vampires lashing out if they don’t have their safeguards. The factions are similarly fleshed out. We also see some real proof of Claire’s maturity with her not just seeing this nuance but also her behaviour over her father’s heart condition.

The factions that are tearing at Morganville are also far more nuanced than we’ve seen before – Amelie and Oliver have an interesting relationship that is fascinating to explore. Myrnin is almost a tragic figure even while terrifying and dangerous and brilliant. Even Shane’s father has some depth to him. It’s actually rather bemusing but the big forces in the town and the antagonists are, in many ways, far more developed than the actual 4 main characters.

I think the pacing was still a little more padded than necessary, no matter how busy or urgent or panicked Claire is, she can always pack in plenty of moping time and some hellaciously long internal monologues. But, again, this was much better than in previous books in this series.

We have some small amounts of inclusion with Hannah the Black chief of police and a new Asian character – not major roles and a long time coming, certainly, but they’re there, just. Despite a gazillion and one characters, GBLT people seem to have the good sense to get the hell out of Morganville and there’s not one. There’s also a disturbing trend of mixing evil female characters with “sluttiness” looking at both Monica and Ysandre; their revealing clothing is coded as evil.

The book continues the series theme of mental illness as danger – the most obvious being the disturbingly terrifying Myrnin, but we also have Monica’s crony who is described as being almost sociopathic even for Monica (whose own behaviour is almost cartoonish in how extreme it is).

I’m not going to go so far as to say I enjoyed the book per se. But I didn’t hate it either. It was nice, it was pleasant and it is doing a really good job of breaking away from the major problems that consumed so much of the rest of the series. I still don’t find Claire to be a particularly fun character – she’s a very blah, nul person. I just can’t get any grasp on her actual personality – she’s smart, she likes Shane and she’s generally supportive of Amelie but other than that? I can’t really get a grip on her as a person. Similarly Shane annoys me since he seems to be anger or attraction to Claire, Michael doesn’t really seem to be anything – the only one of the main 4 characters who seems to have some decent meat to them is Eve. I can’t put my finger on why, but I just don’t feel any personalities here, they feel unfinished.

That said, Morganville vampires has made some amazing changes. Claire is now thoughtful in actuality rather than everyone just saying she was. The conflict between the vampire factions and the humans is decently nuanced and interesting. Claire is developing an actual relationship (albeit not a romantic one) with Myrnin. There’s an interesting story and the characters seems to have grown up a lot – not that they’ve grown and developed, but a lot of the ridiculous has been stripped from them. I’m not intrigued to see where this series is going.