Defiance, Season 2, Episode 1: The Opposite of Hallelujah 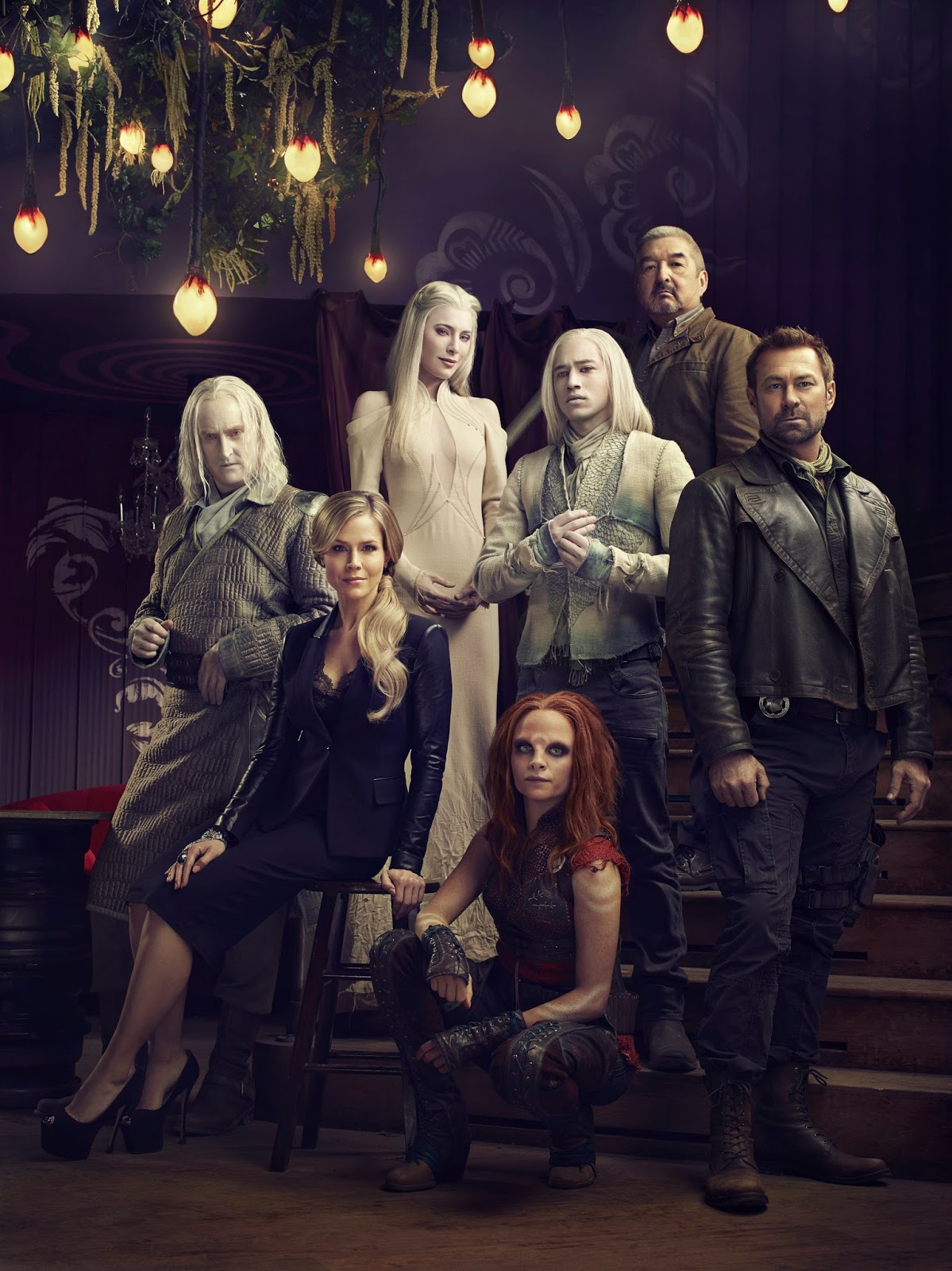 The last episode of the last season was titled “Everything is Broken”, it was very appropriately named. With people dying, Irisa going full on chosen one, ancient weapons, the Earth Republic moving in an all kinds of chaos and shenanigans. So how are they going to pull themselves out of this?

Apparently by leaping forward 9 Months. Gah, time leaping over all that action? Shenanigans! Shenanigans I say!

We open with a voice over, the new interim mayor making a speech on television about how wonderful Defiance is while we do a quick tour of the various figures of Defiance. He also has lots of praise for the Earth Republic which has funded some elements of their new dominion – but has also nationalised the mines, meaning Rafe now works there rather than owning them.

Of course, when the speech is over there’s more tension. Mayor Niles and the Earth Republic Viceroy Mercado don’t get on well and Miles is clearly much craftier than he seems. Niles goes to the brothel/bar once owned by Kenya and now apparently run by Amanda – he wants to hire her. She still considers him an enemy occupier. Niles doesn’t give up and does point out that Defiance’s mayor (Datakk) did stab their representative. His charm makes her smile (oh I see a love interest in the future) and he’s determined to get her on side.

When he leaves Stahma arrives, she talks to Amanda has a friend and we find out Amanda still thinks Kenya will come back. Stahma tries to get her to accept that Kenya isn’t coming back (as Stahma should know) but Amanda insists Kenya will return. Amanda also gives a cut of the profits to Stahma – protection money?

From there to New Chicago (is this the first time we’ve left Defiance?) which is very very very cold. Nolan is trying to find Irisa, which means tracking down the Castithan who experimented/operated/did odd ritual on her when she was a small child. He knows she disappeared because of the artefact inside her and he hopes one of the Castithan who were part of the cult will know more. Which means pointing a gun at a cultist’s head while his terrified wife is tied to a chair. The cultist has a full blown religious moment about how he will know Irisa’s “terrible love”, completely uncaring about his bound wife. Nolan shoots him. He tells the furious wife that he had it coming.

Nolan continues his quest to, Angel Arc, what was once Hollywood following Irisa’s trail. But he is recognised by one of the people he questions who passes it on. To Varus, a Liberata who is an old acquaintance of Nolan’s – and not happy with him since Nolan stole from him. He employs men with guns and a casual attitude to violence help him express how upset he is about that. Mid beating, Irisa arrives to stage a rescue –they’re reunited.

Irisa claims the E-Rep got her but she escaped and she’s just been getting by – avoiding all the woo-woo and Nolan coming back to life (Nolan smells bullshit and says so. He lets it go though and repeats his plan to go to Antarctica – but Irisa is determined, they have to go to Defiance.

For some reason while Nolan is shopping, Irisa follows, attacks and murders a passing Irathient woman – then hides what she did from Nolan.

In town, Alak is trying to keep on his father’s business (but on somewhat more ethical lines, it seems) but he may be too nice a guy to keep the business going and ensure everyone falls into line. At home Stahma expresses her disapproval of Alak’s kindness

In the mines there’s a terrible industrial accident and a man loses an arm. Rafe rushes to help and donates blood. He blames the E-Rep making the miners work too hard, something not shared by all the miners. One protests that Rafe made them work just as hard (which is disputed – most of the miners are taking drugs to keep working and the machines are on 24/7) – and the E-Rep pays much better (which is true). The protester thinks Rafe just wants his mines back.  The man who lost an arm dies

As Niles says goodbye to the visiting Viceroy, some locals graffiti the E-Rep banners with a call to “Rise up and kill the E-Rep”; they’re captured  - Tommy acting as law enforcement – they’re the sons of the miner who died. They’re arrested and the Viceroy takes the opportunity to snark at Niles – losing the town may be worth it to him so long as Niles is suitably humiliated. When the Viceroy leaves Rafe tries to speak on the men’s behalf but Niles is pissed – the only reason Rafe isn’t in the prison camp with Datakk is to use him to keep the miners in line.

Niles tells his Bioman, Churchill, to “take care of those boys.” He takes them by truck to Camp Reverie but stops in the way, apparently nature calls, leaving the door open. The boys escape – only to be eaten by hellbugs. The skull on the ground suggests this isn’t the first time. Churchill closes up the truck.

One man survives and manages to get back to Defiance for his father’s funeral. Cut to Amanda storming into Niles’s office because she doesn’t believe 2 kids coincidentally escaped a Bioman into hellbug territory. She chews him out and demands that the surviving brother, Joseph, be pardoned. Niles agrees. She’s also taking a job with him so she can tell him when he’s screwing up in future.

Back to Camp Reverie and we see just how awful the conditions are – the people are filthy and in rages, and they’re fed by guards throwing a bucket of scraps at them which they then fight for in the mud. This will probably be a reality programme on TLC next week. One woman nearly hits Datak from behind but Yewll shouts a warning.

In town, Alak is approached by the Castithan he was kind to (giving him more time to complete an order despite Alak having already paid up front) – he has been badly beaten. He gives Alak his money back and promises the order – for free – soon. The gang members with Alak praise him and kneel.

Alak goes home and demands answers from Stahma as the “man of the house.” Stahma protests that she would never ever presume to give orders – Alak (who apparently knows his mother better than Datak) rephrases, asking if she whispered a little suggestion in someone’s ear. Stahma snaps –Datak threw everything away because he couldn’t control his temper and now Alak isn’t ruthless or brutal enough to get shit done (“once again the strong Castithan males falter and I am left to open the airlock door myself.” Ooooooh, lets us remember that Stahma was engaged to be married on the ship to someone else, but he had an accident. We all suspected Datak). She’s not playing in the background any more – she’s taking over. And no, at the moment the men won’t take a female leader (for now…) so Alak needs to get in line and be a good little Stahma puppet.

Closing montage - including Amanda taking some kind of drug before going to bed - and being watched by Niles on creepy stalker CCTV of her bedroom that he has hooked up to a wall sized projection. And Irisa has a vision/hallucination/dream of cutting Nolan's throat. And she has an invisible version of herself following her

I like seeing these different locations in Defiance, the little clues they have of the old city and what the war and Terraforming have done is really interesting to see (like the Hollywood walk of fame).

The mines are going to be an interesting storyline – conditions vs pay, the idea of whether any miners really should owe loyalty or respect to Rafe because he’s their ex-boss. I’ll be interested to see what they do with it.

Alak, also promises to be a nuanced story – can he keep up his father’s business while being a nice guy and trying to be more ethical about it? Is he just playing games – I mean, even if the drugs are made in more humane ways, he’s still a drug dealer, does it make him ethical? And this mixes with Stahma who is, by anyone’s metric, far more capable of running Datak’s business than Alak ever was (probably more so than Datak himself for that matter), but the misogyny of Castithan culture demands a male leader. She endured under Datak (who she handily manipulated), she’s not putting up with this under Alak. Though it feels off to be cheering a crime boss, I kind of want to cheer Stahma

One thing I think Defiance always did really well is making the aliens actually fully realised cultures, especially the Castithans we spend the most time with. They’re not just “pale humans”, they have their own cultures and traditions and it really does influence everything they do. Little things like their little ritual before dinner, having their own food, or Alak casually walking into the bathroom with his mother (since they practice communal bathing – to an extent that Alak actually thinks it’s weird for Stahma to bathe alone). It’s very good at establishing a full blown culture.

And then there’s Defiance itself – E-Rep vs independence, another fun storyline.

In fact, out of all the storylines raised this episode the only one I’m not very invested in is the one we’re likely to spend the most time on – Irisa and Nolan, the artefact and the woo-woo. Like last season I don’t think it’s necessary. There’s this big fascinating world with aliens and politics and really intriguing characters – we don’t need woo-woo. In fact, can we make this the Stahma show?

On the problematic, most of it comes under “1st episode, let’s see” but the woman who attacked Datak for food in the Camp was fat. This is grossly unnecessary – it’s a camp where people have to fight for food. I’m sure quite a few people would have attacked Datak for food – but it has to be a fat person? Because “fat person kills for scraps!” would be, what, more likely than a starving prisoner attacks for food? And what the hell is with Datak and the handjobs, seriously? What is this? A desperate attempt to show the misogyny and sexual open-ness of Castithan culture? Because that has been done and far better

I just can’t think what happened – did they write the episode and then someone come in and declare “this needs more handjobs!”?