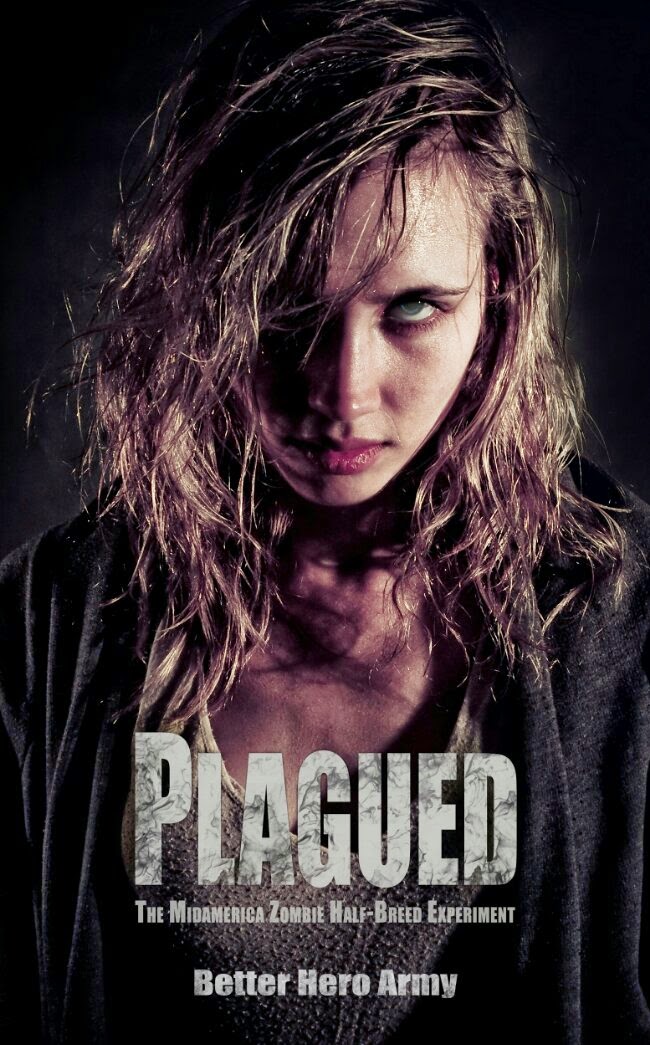 Tom has to go to zombie territory, the plague states, with his brother for the first of what are likely to be many trips to come. He’s looking for his sister, a child, a zombie, lost in the outbreak.

Of course his brother, like so many others, is really blasé about the zombies now. There’s no reason to be afraid, he was assured, certainly not reason to carry a weapon.

Then there’s the zombie escape. Tom flees for his life, relying on his father’s connections to rescue him – and a handful of grizzled veteran zombie hunters to keep him and his fellow novices alive.

I liked it, but where’s the rest of it?

That’s kind of how I felt after reading this book. I liked the story, I liked the characters, I liked the world setting. But I think more could have been done with just about every aspect of it. It had a huge amount of potential, some excellent frame work and raised some really impressive concepts and issues and didn’t follow through

The protagonist, Tom, has some major baggage – he was there during the outbreak, he saw his sister turned into a zombie and he blames himself, despite being a child when it happened. Not only does he blame himself but so does his family and a number of other people who have completely forgotten what it was like during the outbreak. Because zombies have been rendered somewhat harmless, a lot of people have no concept of how dangerous they are – and that same attitude means that people scorn Tom for not having the knowledge and skills then that professional hunters have now

This is a really interesting point that is somewhat reinforced by the group travelling through the zombie wilderness, with the contrast between the tourists and the experienced hunters. The tourists are inept, helpless, ignorant and argumentative – not in a comic or over the top way, but in a very human, realistic way; because scared, angry, confused people are some of the most annoying creatures on the planet. They contrast perfectly with the ruthless, very prepared and very skilled hunters and it not only shows how dangerous zombie hunting is, but also how unreasonable the accusations Tom faced were.

And so much more could have been made from that! And his fraught relationship with his dad and his brother! And the way he treats the Hunters compared to the other tourists.

Tom’s mission in the zombie-lands is to find his zombie sister – and, again, so much more could be made of that. His guilt and grief, the question of what to do when they find her, the impossibility of the task – it’s all touched on, but it’s just touched on.

The world is an interesting post-zombie-disaster world in that the disaster has, effectively, been contained. Zombies haven’t taken over the US, but they have taken over several states which have been cordoned off from the rest. The US functions – but the actual details of that are left vague which I can accept as irrelevant to the plot, but I want to know more. The plague states aren’t ignored, however, in fact there’s an entire industry around hunting zombies, removing their infectious glands and making them into slave labour.

There’s so much to be analysed here – the morality of it, the economic effect of it, how that contrasts with Tom’s quest to find his sister – is he going to buy her? Is he going to have her “made safe”? Again, we have a lot touched on but it could be so much more.

Then there’s the half-breeds, the zombies with human qualities and the implications of them – especially in relation to things like Tom’s sister and the zombie slavery – which just isn’t really explored. Especially since they do some very odd things that we never have chance to see explained but I want to explore.

Most of the book is a fun, exciting and really well written story of a group of people fleeing through the plague states to safety. It does a really good job of introducing the world and touching on several of the aspects both of that world and of Tom’s own life – but the main focus is the story. It shows the hunters, a lot of really clever precautions and negotiations they make to do their job. It does an excellent job of showing their training and experience and a really human job of showing how people react in a crisis. Behind all that is Tom’s connection with the halfbreed which is really nicely paced and handled. It’s a good story – but I feel like most of the book failed to use the awesome foundation that had been established. Like we’re in a vast, amazing playground and deciding to sit quietly in its emptiest, most boring corner. We’re having great fun in that corner. We’ve made that corner entertaining. There’s some good stuff here – but the rest of the ground is just waiting for us.

On the inclusion front, the book’s lacking. We have no LGBT characters, I didn’t notice any POC characters and there were two notable women – one a tourist who wasn’t even especially prominent in the story except as a victim (one among many) and the halfbreed. She’s a prominent character, but she’s also a semi-coherent slave.

As the first book in the series, it has done its job. The world and the characters have been displayed in a way that makes me very eager to read more – almost desperate in fact. The potential suggested in this first book is huge, the concepts to be grasped meaty and fascinating and the world has several unique elements that beg to be explored. The only failing is that so little of it was done in this book that I’m both hungry for the next and worried that the exploration isn’t going to happen