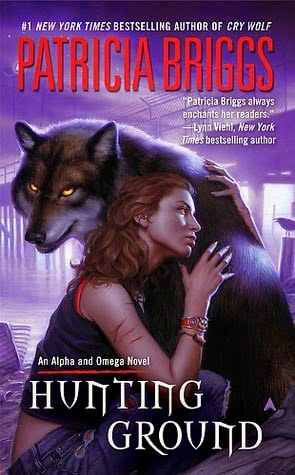 Not an easy proposition at the best of time – but the powerful, man eating werewolf Jean Chastel and his influence on the continent adds a lot of complication and difficulty. But just because he’s the most obvious threat, doesn’t make him the only one.

This was a pretty decent mystery, which I always appreciate. I had suspicions about the culprit but the ending still took me a little by surprise with enough red herrings and complexities back and forth to leave me guessing – and second guessing – my assumptions and suspicions. That’s a sign of a good mystery

We also got some nice world building details I appreciated – some more touching on the fae, more looking at werewolf packs beyond North America and some nice research as well – there’s definitely been some more detailed readings of Arthurian legends here I liked to see.

I also liked Charles development – his own insecurities don’t feel like angst but actual reasoned doubts and concerns from a man who has been a killer for so long, hated it even while he considered it necessary and now fears Anna’s disgust simply because he is disgusted with himself. We’ve also got some very reasonable conflict from a very private, very close person who is now finding his life blown open extremely quickly. Anna has had her whole life changed, far more than Charles, but Charles has also had to change centuries of habit which will take some time.

Anna is still very nervous even extremely afraid of Alpha werewolves. Which forms a loop because the more afraid she is the more “protective” they become which, in turn, makes her more nervous and them more agitated. I actually really like this element for 2 reasons: firstly, Anna has faced considerable abuse in her old pack. Alpha male werewolves abused and raped her - that kind of trauma doesn’t just vanish overnight because she’s found a good man – I like to see trauma given time to heal and grow and work through rather than magically disappearing – and yes, that includes the issues she still has with Charles.

I also like it because it helps poke a hole in one of the ongoing issues with this world setting, seen more in the Mercy Thompson series than the Alpha & Omega series; the whole idea of Alpha werewolves being sexy and the habitual tip-toeing around them all the time. While it’s very normalised in the other books, Anna makes it clear that it’s frightening, it’s intimidating and it makes Alpha werewolves difficult and unpleasant to be around.

It works well with Anna growing into her role as Omega – not the uber submissive to be sheltered while they hide, but a dominant wolf without the temper and the hierarchy. We see the strength of Anna, her willingness to challenge what no-one else will, her willingness to argue even with the Marrock which even Charles avoids. And while everyone else is snarling and acting on emotion an instinct and pack structure, Anna moves in and makes people listen, makes people talk and makes people think. Her stepping outside the structure not only helps her, but she uses that status to drag other people outside of it as well – she makes the Marrock listen to Charles, she demands everyone stop and consider what happened rather than rush to the hunt. Anna, at least a little, makes werewolves think and, in doing so, challenges their usual non-thinking way of doing things.

This all comes together to make Anna a character who is definitely growing, who is facing her fears, who is learning her role and is not only adapting to her new life, but also changing elements she knows are wrong. She’s strong in a way that goes beyond being dangerous (though, again, she makes it clear repeatedly in this book that she IS a werewolf and that is a dangerous thing) but by being intelligent and not ruled by the RAWR WEREWOLF thinking.

Linked to this we have some decent female characters –who Anna kind of gets along with. Kind of. There’s an unfortunate amount of jealousy there because anyone looking at Charles tends to rile Anna – albeit not in an extreme fashion. The problem is there aren’t many women in this book and part of that is due to that really common but really strange werewolf trope that says female werewolves must be uber rare. So a gathering of werewolf packs means very few women – and a lot of those women do fall into antagonist, love interest or victim  roles. There’s some competence, skill and intelligence beyond that – and bringing in Moira from the Seeing Eye short story was really essential in trying to break the antagonist/victim pattern.

Moira’s also an interesting character because she is blind, powerful and is not cured of her blindness (as happens to a lot of disabled people in the genre) nor do her powers render her blindness irrelevant (with “magical sight” or some such –also common) and nor are her powers entirely linked to being blind (she isn’t a seer) though her power does come from her blindness indirectly.

Charles is Native American and he’s a main character, a co-protagonist, he has complexities and different aspects of his personality and his main strength is he’s a dangerous fighter. He also has woo-woo, odd woo-woo beyond the woo-woo that every werewolf has. Which links him with every single Native American I’ve seen in this world so far – all of them have some kind of unusual woo-woo. Charles also throws out of a lot of wisdom from his grandfather – which is great, show the old man was wise and clever even matching Bran, but does it have to come with rather clichéd dialogue? Like couldn’t he have advised Charles that he had a habit of fighting through obstacles when he could easily go around rather than calling him “He Who Runs Into Trees”?

We have some other POC in some of the werewolf packs and passers by, they’re not major roles but nor is Charles the only POC in the book

There are no LGBT people.

The pacing of the book is nicely laid out, we have personal conflict without it consuming the book, but also covered enough to remind us these are people and are in a new relationship. We have politics and action in a nicely balanced measure, and a nice big dollop of exposition in a way that generally fits the book well. It’s all pretty neatly gelled together –world building, mystery, character development all in a good balance and not just with this book – but also fitting nicely with the other books in the same world. It makes a great addition to the over all story.