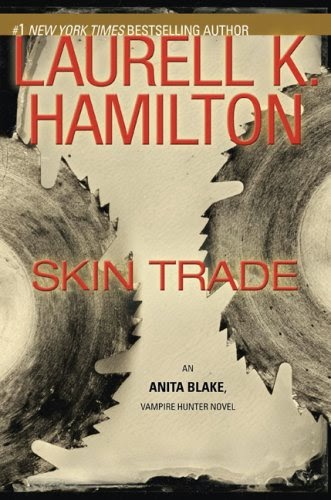 Anita receives a package in the mail – the head of a vampire hunter.

Vittorio, the vampire serial killer, has emerged again, this time in Las Vegas. He’s already slaughtered several people there to add to his ever expanding kill list and he wants Anita.

Anita calls in what support she can and heads to Vegas before more are killed – but the beasts and weretiger politics also await her in Vegas, no matter how much she’d like to focus on the case.

The most frustrating thing about this book is that, if you squint hard and really look, there are shreds of the story the Anita Blake series once was. Most of her lovers are back in St Louis while she’s in Vegas which takes her away from ground zero of angst and sex and we could focus on the plot. We could.

And that’s how I read the whole book, every time Anita starts investigating the crime and getting her hands all up in the blood and investigation. Edward shows up, Micah and Nathaniel and Richard and Asher DON’T show up, she’s working with the police and, ok, she is spending an inordinate amount of time reciting a gun catalogue, but I can live with that…

But it was not to be. Because whenever we get close to the plot something interrupts! We have pages and pages and pages of pointless recap. This is book 17 in the series – enough with the Stand Alone Stuffing!

Then there’s Olaf who is creepy and hot for Anita. Anita finds this creepy which makes him hotter so he gets creepier in an infinite loop of creepiness and drooling  that goes on and on and on and why, in the name of all that is sensible, has no-one killed this serial killer yet?! To make it worse we have Edward stood on the sidelines gasping “zomg he really likes you Anita!!” like that’s even remotely relevant?! Throw in Anita actually playing along and blaming herself for giving Olaf leeway to be ubercreepy and it’s not just in the way of the plot, but it’s vomitworthy and in the way.

To this throw in some scenes of Bernado moping around declaring how hot he is and whyyyyy won’t Anita shag him (with minor notes provided by Requiem basically declaring how hot he is and whyyyy won’t Anita love him). Both of these take FAR too much time in a very distracted book. Then there’s Wicked and Truth, added to the sex stable, with their own pages of exposition.

Also what is with all these super-hot guys, Jean-Claude included, becoming all insecure because ANITA doesn’t want them? Every other woman in the world can fall to their knees in awe of their hotness, but it doesn’t count unless Anita gives them the seal of smokingness?

Then can we get to the investigating? Hah, no – MISOGNY!

Then can we get to the investigating? Hah, no – TIGERS!

The the red tigers and the white tigers and the black tigers and the yellow tigers and the blue tigers… BLUE tigers?! Seriously book? Seriously? Anyway there are a gazillion and one tigers with special powers and histories and – frankly it and these characters are all completely irrelevant (and, having read to book 21, they remain completely irrelevant) because what we’re actually seeing is another long, convoluted reason to add yet MORE men to Anita’s harem. The rest of the detail – all the politics with Chang Bibiana, the colours, links to the Mother of All Darkness – it’s all dross which never actually adds up to anything other than MOAR men who are pretty and ANGSTY. Oh why do they always have to be angsty? Is there not one man in the Anitaverse who isn’t in need of extensive therapy?

This is a problem I’ve had with the last half a dozen or so books – plot lines that are raised, that we spend an awful lot of time on but they don’t actually go anywhere.

Ok investigation now?  NO! MOTHER OF ALL DARKNESS!

Who drops in and just kind of woo-woos about being SCARY and everyone is SCARED and she’s so SCARY and let us describe how super scary she is at incredible length but she doesn’t actually DO anything, Holy symbols glow. Random woo-woo is dragged in (a witch Archangel this time) before disappearing never to be seen again, random sex happens from related woo-woo.

She has spent the last 3 books, dropping in being scary then disappearing. The Mother of All Darkness is just a very vivid nightmare, I’m sure – because that’s all she ever does!

In a very classic Anita-ness no-one actually has TIME to investigate so we then have the standard bad guy-kidnaps-people instead game. I don’t know why they bother, if they’d just leave her alone, Anita would become so distracted she’d actually forget what she was doing and focus on her side issues, angst and sex. Anyway, this kidnapping comes with two special bits of awful

Awful #1: Vittorio is special in  8 gazillion special ways none of which are important. We get a HUGE WHACKING INFODUMP of exposition about this special vampire of specialness, none of which remains relevant. Not one damn iota. Seriously, you could chop that bit from the book and it wouldn’t have made one teeny tiny bit of difference. And, really, if he were this special couldn’t it have come up once, just ONCE, in the whole series? Mother of All Darkness has been waving around being spooky for books now, couldn’t he have come up once?!

Which leaves me screaming in frustration because for a moment, for a brief, shining moment, this book convinced me that we were going back, back to the Anita of yore, before the sex and the info dumps and the angst and the Mary Sue to end all Mary Sue.

But we’re not done! It’s social justice time! Hey don’t worry it’s not so bad. On POC we have several, including moderately researched Persian mythology. They don’t have huge roles, but no-one has a huge role in this but Anita, not even Edward. There are no LGBT people, but several of Anita’s men have “come out” as gay or bisexual, even though they’re not, to make Jean-Claude look good. (Because Anita sleeping with other people is ok if Jean-Claude is sleeping with them as well even if he’s not. Apparently).

And on that sexism I mentioned with all the police – it’s so lacking in even the slightest form of subtlety that it borders on parody. There are characters here who might as well just scream “SLUT! WHORE! JEZEBEL!” every time they see Anita. It’s almost pavlovian. They do it in front of witnesses, including witnesses that are obviously friendly to Anita and owe the misogynist nothing. The attackers have no power over Anita, no way to stop her reporting it no way to even give her a disincentive to report it (not that she ever does). They even go so far as to accuse Anita of having sex with the entire SWAT team which not only offends Anta, but the SWAT members themselves, who are right there. It’s ridiculous  to an almost comic level

It would have been much better to show – and elements of it were shown – them distrusting Anita because of her relationships. Or worrying that she’d be able to keep up with them in a condescending fashion. But these better elements are overwhelmed by the characters yelling “SLUT WHORE JEZEBEL!” at her every 5 seconds.

There’s also the standard whiff of “exceptional woman” to Anita. To convince the SWAT members that, yes, a woman can keep up with them she doesn’t challenge their sexism – she lifts 4 times her bodyweight. She’s not proving that a woman could keep up with them – she’s proving that SHE has the super special woo-woo to keep up with them. And there’s another female cop – but she’s “one of those women who don’t like other women”.

I laughed, oh how I laughed.

The other female characters are a blink-and-you’ll-miss-her doctor, a torturing traitor, a random suspect and Chang Bibiana, queen of the weretigers and the unreasoning manipulative woman trying to get Anita to sleep with her son – until her husband, Max, lays down the law and puts her in her place.

It promised so much, but in the end we were sucked back down into the terrible pit of the last books of this series – with an added dollop of awful with the porny showdown.