Dead, Undead, or Somewhere in Between (Rhiannon's Law #1) by J.A. Saare 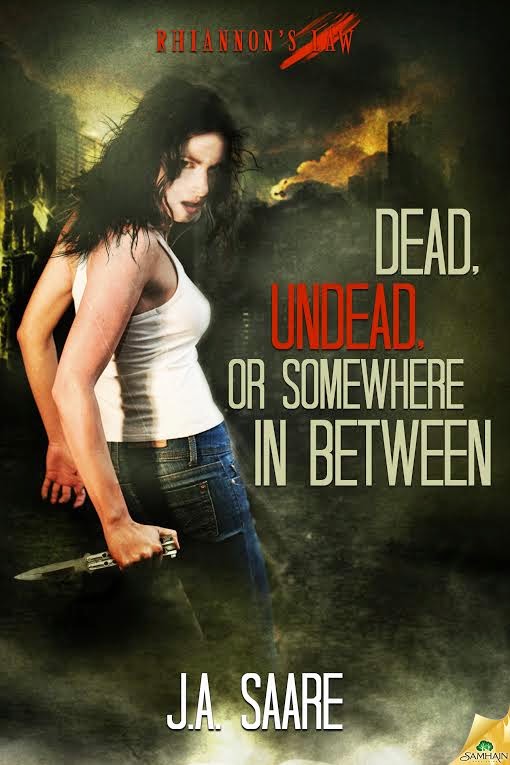 Rhiannon is trying to live her life as quietly as she can – alone, without attracting attention – at least no more than her hair trigger temper and quick mouth get her – and normal. She certainly doesn’t want to think about her ability to see ghosts – especially the ones that died violently, like her parents

Then the vampires find her and suddenly she’s in demand. There’s a murder to solve, a vampire killer to track down – and her own safety to find her. Because if a vampire will claim her now she is known –it’s just a matter of who

We have a spiky, anti-social protagonist. She curses a lot (and people complain about it to draw attention to it and because, hey, you may drink blood and be investigating a murder, but damn those bad words) and has lots of sarcastic little snits at people around her and generally makes her as loveable as a porcupine. I especially like the moment she asks a really personal, outrageous question (whether the vampires have sex while drinking blood) and then gets all huffy because Disco is short with his response. Shockingly, despite being touchier than a rabid rhino, she’s surprisingly mellow about vampires who basically blackmail her into serving.

She has a psychic power (Necromancy) that makes her super desirable to the vampires. There’s also lots of hints that one day this will make her uber powerful (since she already has more power than any of the other necromancers around even without any training at all, because she’s just that special). This power also puts her at risk to vampires so she must join with Disco or face doom and horror. Amazingly, she’s actually lived her whole life being ignored by vampires until Disco then suddenly that’s it she has days to decide to pledge herself to him or it’s open season. The minute she meets him another vampire appears to scare her and basically force her into Disco’s arms. Personally I’d be suspicious about that if I were her, but I think it’s just convenient, clumsy writing. So he has to mark her, binding her as his (making her his bound human servant) through a mark which creates a super erogenous zone, because of course it does.

She uses this nifty little convenient power to help solve a series of murders the vampires are investigating. That investigation is actually pretty terrible – they go to a party where rich people are tasting vampire blood (because it’s a drug, yes, yet another original concept here) to try and find out who is kidnapping and killing vampires for their organs… I just… why? I mean, they get invited to this rich, exclusive party THROUGH THEIR DEALER! Why these people would be involved in organ shenanigans I don’t know. It’d be like going to a rich shindig with cocaine and asking people if they happen to had a sideline in harvesting kidneys! YET IT WORKS! Aaaaargh. Well, kind of, actually the mystery is more solve when Rhiannon is kidnapped by the bad guys. No that’s not a spoiler, that’s how EVERY MURDER INVESTIGATION IN URBAN FANTASY IS SOLVED. Hell, Anita Blake, Sookie Stackhouse, a handful of Kelly Armstrong’s protags – if they didn’t get kidnapped by the big bad there’s absolutely no way they’d ever solve the crimes they’re investigating.

She also has dead parents and a tragic, traumatic past that makes it impossible to trust and be always alone and a sad panda (like every other urban fantasy protagonist ever) until the super sexy vampire comes along and heals her pain with his magical penis.

What else do we have? Oh yes, she has a job that she loves (and would actually be, kind of good to develop – bar tender in a strip club) but after the beginning she hardly returns and is already talking about quitting (and her attempts to make the dancers sympathetic are quickly overwhelmed with “queen bitch” etc). There’s another female necromancer who, of course, Rhiannon doesn’t like because FEMALE. She’s also unlike other women, she tells us this, proving the point with her lack of frilly curtains (and, of course, she needs someone to do her hair, make up and clothes because some feminine things are beneath her).

Put this all together and we have a write-by-the-numbers Urban Fantasy story, let no cliché get unturned! This is why I went through all the above writing it out – because you can play cliché bingo there. Vampire blood as a drug, marked human servant, protag with desireable investigative magic, protag with magic that’s going to be super powerful, protag with dead parents and sad past, cliché cliché cliché cliché. Seriously every last element of this book has been done before, not just once, but dozens of times. About the only unique-ish element to this book is the development, relationship etc that would normally take 3-6 books is all crammed into one. So Rhiannon goes from “aaargh vampires, stay away from me!” to “oh Disco, I love you forever and ever” in, like, a week. She starts feeling jealousy concerning him the first time she realises he has been with other women – on, maybe day 3 of meeting him.

In fact he whole relationship is skeevy – he continually puts his hands on her and won’t let go when she tries to push away, he continually tells her the bad things he could do to her but he totally won’t because he’s a good guy (yeah, that’s not threatening). She’s oddly embarrassed by not inviting him into her home despite barely knowing him and being afraid of him. Even when they have sex (yes she’s a virgin, of course she’s a virgin) he alternates between saying how she can say no at any time (which is great) and how she needs to say no now or never because he can’t help himself.

Oh yes the vampire is called Disco. It’s a nickname, his real name is Gabriel. Yes it’s cringeworthy that everyone calls him Disco all the time. Yes, I am imagining sparkles. Twirling sparkles.

We have some POC… but not in huge roles. We have a Black man from Africa with evil woo-woo of evil. We have a big Black bouncer who is, well, a big Black bouncer. And a Latino man who runs the strip club “his Dominican heritage made him a natural ladies man”. We have some random POC in the rich sex party which she goes to for investigative purposes (Anita did that. And Sookie) with the slut-shaming rapist incubus (no, really) and suggested bisexual depravity (which also makes up the sole LGBT inclusion in this book). One of the rich blood drinks was a Black man as well – and the only non-troped one of them all.

All in all, it’s not good. I wouldn’t even say it’s a bad story per se, in between the fails. it’s just there isn’t one teeny tiny thread of originality. Honestly, the whole thing was a giant “been there, done that.” It felt less like it was written and more like a computer put it together, lining up all the tropes.