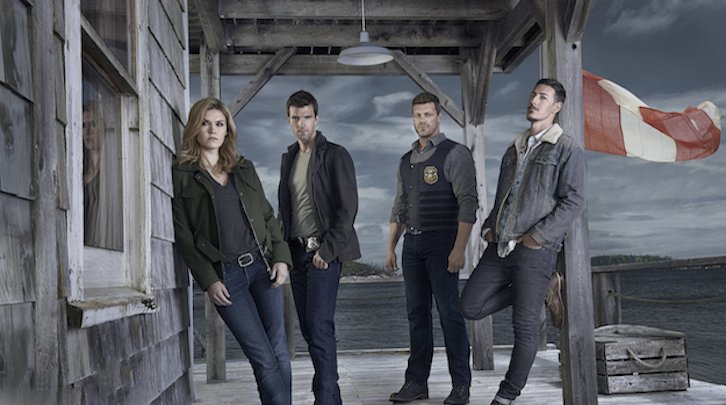 So, everything changed at the end of last season. Audrey is now the evil Mara, Jennifer and Duke are not feeling so good and William has been dropped in a dimension with an over-active smoke machine.

So with all that happening we need to see Gloria. Hey I normally love Gloria, she’s awesome, but really with all that’s happening do I need to see her and her now trouble-less baby? Vicki’s (she who can make her pictures real) also there to remind us that the Troubles are staying for extra long time this time round rather than their usual break.

Then an earthquake hits – and a ring of light explodes out from the lighthouse (where Audrey and the gang are) before the lighthouse collapses into the sea.

Duke and Dwight end up on shore outside of Haven – and Duke is no longer bleeding from the eyes (which is probably a good sign).

The Teagues are bickering in the middle of the woods, Dave is badly injured (he was shot)

Nathan finds Audrey and she promptly cuffs him and steals his gun because he’s completely forgotten that she’s now evil Mara. Evil Mara has really not enjoyed the last 500 years of reincarnated do-gooders (all of which she remembers) and needs Jennifer (to open the door and free William) and then she can go on creating evil Troubles for nefarious but unexplained purposes. She clonks Nathan unconscious which, let’s be honest, we’ve all wanted to do occasionally.

Duke finds and frees Nathan and now we have two teams hunting Jennifer. When they realise that the lighthouse is destroyed (much to some administrator’s distress) that means the doorway to Dry Ice World is under the sea – so now what will Mara done? Nathan and Duke bicker so it’s time to interrupt them with a Trouble – administrator Bill gets his eyes sewn up. Nasty.

They decide it’s a new Trouble and Nathan and Dwight talk about what to do – Nathan is worried about Dwight going after Mara and Mara getting hurt because she’s till Audrey, precious. Dwight is less sure. Duke’s obsessive asking everyone about Jennifer reveals Mara also asked where she was even after finding the lighthouse exploding – suggesting there’s more than one door to Dry Ice World.

They need info. It’s time for the Teagues to be obstructive and vague again! Alas, Dave is unconscious in hospital and Vince knows little and Cabot’s journal with its own ambiguous hints is missing (probably hidden by Dave). While in the hospital, a member of the Guard (freaky Trouble people with rather extreme attitudes) warns Dwight everyone’s getting antsy especially since Vince (the head of the Guard) isn’t talking. Dwight’s also having to deal with the new sewing Trouble while Duke obsessed with Jennifer and Nathan obsesses over Mara. Which now includes a guy whose eyes and mouth were sewn up while he was driving (and caused him to crash).

Mara is pretending to be Audrey to get access to a coffee shop where she uses odd 60s 3D specs vision to see woo-woo – something on a wall. Presumably another door which shocks her when she tries to touch it. 3D specs vision has the power to make random walls hurt you – not the most useful Trouble in the world. This irritates her enough to shoot some random guy for not being co-operative enough.

After discovering this murder Nathan and Duke go to Vince who has found the journal of useful exposition – there are “thin” spots between world Mara can open to rescue William – but she probably needs Jennifer to do it. Vince has a map of 5 thin spits (including the lighthouse and coffee shop). Nathan, Duke and Dwight (despite him wanting to investigate the whole sewn orifices thing) get a Thin Spot to stake out.

Dwight does find Mara – and gets shot in the chest (he wears a bullet proof vest because his Trouble is bullet-magnet) and then tased while Mara laughs at his so-awful Trouble. But she can’t use this Thin Spot either, since becoming Team Bad Guy she has lost her special super power of making huge leaps of logic and knowing the answer. She questions Dwight as to who is sealing up the “Thinnies” and he spills about the sewn up faces – which she knows nothing about (well done Dwight). She taunts him about secrets so I’m guessing Nathan knows stuff he hasn’t told Dwight – I’m not sure what of the revelations last season haven’t been passed on

Dwight fills Nathan in basically confirming that, yes, Jennifer is the key to opening the Thinnies, but also that Dwight isn’t going to keep chasing after Mara when there’s someone else running around town sewing up people’s faces. Talking to Duke, he thinks that Jennifer is actively going from Thinnie to Thinnie and sealing them

Mara catches up to Nathan (who, looking out for Mara, decides to focus on the Thin spot – a rock in the sea rather than, well, looking out for Mara) and easily disarms him. Time for snarking at each other (I like how Mara is shocked that Nathan knows the things that she just told Dwight – like she doesn’t know that phones exist) and Nathan expositions that Mara hasn’t caused any Troubles yet because she can’t – because she needs the box of Black Goo (or Aether as she calls it) that William hid. Nathan’s also sure that Audrey’s still in there because she hasn’t shot Nathan)

Of course, this Thinnie is also sealed and Nathan taunts her about Jennifer and Mara laughs at the idea Jennifer has the power to do this (got to love how much these people who won’t talk to each other are happy to exposition and “let stuff slip”); Jennifer’s just a convenient messenger system to contact William, not needed to open the door.

As Nathan rants away about getting the real Audrey back, Mara shoots him (I don’t think that’s evil, I’d have been tempted) in the shoulder (which on TV means a couple of episodes’ worth of inconvenience before a fully recovery). She goes to finish him off but then gets the whole angsty Audrey-breaking-through face and walks off. Nathan remains face down (he doesn’t feel pain, why is he incapacitated?)

Dwight goes to Gloria with research (I love Gloria) and follows the last time the sewing Trouble turned up and goes to see the Barrows who thought their Trouble had disappeared with great-grandma after she got killed by a tenant farmer -an ancestor of Duke’s as it turns out. So Troubles with Duke’s family have eaten (with their special Trouble) are now coming back.

Dwight speaks to Duke and they realise the two victims of the Trouble have been people Duke spoke to (and last season Mara told Duke his family didn’t destroy Troubles, they absorbed them). Duke was bleeding when he was knocked out the cave (from his eyes) and it’s his blood that causes random Troubleyness. Dramatic music as they realise generations of Duke’s family have been absorbing a squillion Troubles. Duke getting all excited reveals the big secret to Dwight – that Mara created the Troubles.

This season is going to be interesting – not just because we seem to be finally getting some real meaty answers to questions that have been looming over this show for four seasons, but also because of the inherent shift. Audrey was the protagonist – and it wasn’t even a pretence of an ensemble cast, she was the protagonist. By making her an antagonist and someone we only rarely follow around they change the entire focus and nature of the show – how long will that last and what will we see develop from it?

Mara’s evil – but erasing Mara and replacing her with Audrey isn’t a morally neutral decision. But it does allow for some very dubious characterisation – like Mara not shooting Nathan despite having him at her mercy, twice. What, did Audrey hate coffee-shop guy? And does she have a secret crush on Dwight? Because she didn’t kill them either.

Also, Jennifer is actively sealing Thinnies? How does she even know about them? Can we have some explanation of Jennifer’s woo-woo beyond “whatever is convenient”.

Speaking of convenient, last season Dave, Jennifer and Duke were all dying, Dave can now stagger to a hospital and the other two are just magically fine. I’m not impressed – I don’t approve of using cliff hangers of main characters-who-will-never-die-who-are-you-trying-to-kid but at least try to come up with a decent shenanigan for them continuing to draw breath.