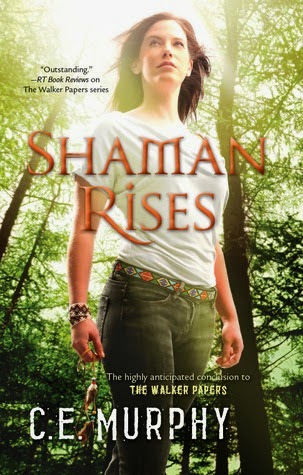 Joanne has fought the Master through this entire series – following on in her mother’s footsteps. Over the last year she has learned, she has honed her power, she has made powerful friends and she’s going to need all of them.

The Master has come to Seattle and he’s throwing everything he has at the city – which may not survive the devastation.

The pacing of this book was break neck. Joanne goes from huge disaster to huge disaster, event to event. There are fragments of plans that are dragged up, then abandoned. A crisis to react to, then another crisis, then another crisis until the first crisis seems to have been forgotten but is still there, crisising (yes, it’s a word, I have decided) and she’s followed by a whole crowd of entourage with yet more crisis and we’re all very very lost and it’s all very very panicky.

In the past in this series I’ve said I’ve been completely lost because of the way the magic and woo-woo are described which can leave combats awash with colours and feelings and gardens and different realms. In this book we have some of that – but I think all the books previously have set me up to be ready for it. No, I was lost in this book because of the sheer amount of stuff happening. Thunderbird Falls and Marcia the witch and Suzanne the demi-hemi goddess and Cernunnos and Annie back from the dead and the Raven Mocker and Leannansidhe and… sooo much. And Joanne runs from each of these to the next, fighting with magic, fighting with her fists, coming up with cunning plans that don’t work, throwing out epic amounts of power – and now they’re in the park  and Billy’s having a huge Necromancer crisis and now EARTHQUAKES and more doom – time for an impossible feat of magic – but now there’s another crisis!

It worked because this is the last book of the series and this is the Master bringing his all, everything, to fuilfil his diabolical plan. Part of that involves bringing down Joanne and, if necessary, all of Seattle. This epicly powerful force is throwing everything at Joanne and since he feeds on chaos and panic and despair, he is destroying the city to empower himself. Joanne is flailing around trying to stop it as everything falls apart around her, she’s also pulled in several directions due to her protective instincts with her being told repeatedly that she can’t protect everyone (something she will not remotely hear). This culmination of the long story ended epicly with a vast confrontation and a very real and constant sense of everything falling apart. It was a struggle that felt, genuinely felt, that Joanne would lose several times over. She made many plans, many cunning plans, that just fell apart. She made mistakes. She had strokes of genius. She threw around awe inspiring power – and there was still a sense of utter chaos, terrible loss and a constant edge of defeat. Most of the book was hopelessness followed by frustration and with a whole lot of confusion.

So was Joanne. After 9 books of growth, Joanne has become what she was destined to be – going from the doubting character in the first book, to current Joanne who has surpassed her father, surpassed Coyote, her mentor and regularly makes every other magic user just gasp in awe. She’s not just powerful, but she knows what she’s doing and regularly does things everyone else considers impossible – simply because she cannot imagine not trying. Usually it’s to save people and is one of the wonderful cores of her character – her greatest feats always come when she has to save someone else, when she puts aside any doubt and makes something work because she can’t imagine it not working. This is Joanne at her epic conclusion- powerful, informed, massively determined and, ultimately, deeply caring for the people around her.


With such a character it’s easy to make a ghastly Mary Sue and make me want to merrily see her eaten by rabid tapirs. But it works – it works because Joanne isn’t perfect, she does make mistakes and her quick, clever plans often fray at the edges. It works because, despite all of Joanne’s immense power, she is still overwhelmed. And it works because while she’s more powerful, others – Coyote, Billy, her father,                all definitely know more than her and others – Suzy, Cernunnos – are more powerful than her. Joanne’s friends also form part of the backbone of her powers. Her armament – shield, sword, armour etc are all tokens from friends and relatives – Gary’s medal, her mother’s necklace. Much of her power comes from her Spirit Animals which are clearly independent. Even when she makes power circles and puts spells together, she does it by drawing on the love and support of the people connected to her. Joanne is mighty – but she has become that way by the people who have supported and helped her throughout the series.

Her supporting cast is always excellent, fully rounded characters with their own personalities, goals, strengths – and flaws. And I loved that the flaw was there (no spoilers) because it is vital and human even for the secondary cast.

Are there flaws to the book? Yes – it was confused; stylistically intended and very appropriate, yes, but still confused. I also think the grand revelation of the Master was a wonderful finale moment, but also came out of absolutely nowhere and, in among all of the confusion, was just an extra layer of complexity that left me somewhat confused. The whole book was hard work – work that was definitely worth it – but it wasn’t a lazy read by any stretch!

As a last book, I also think there were threads – personal threads – that were left unravelled (Joanne and Morrison, Joanne and her dad, Joanne is now unemployed etc). I feel like they would have been out of place in this book but that we may need a short story just to know where all of these characters ended up in their lives.

This book is an epic end to an epic series and a rather glorious end to Joanne’s excellent story that has finally come to a perfect conclusion. There are a few tiny nitpicks, some things that could be ironed –but really this book is epic. Exciting, deeply satisfying, tense and full of high drama and emotion – The Walker Papers have ended on a high note.