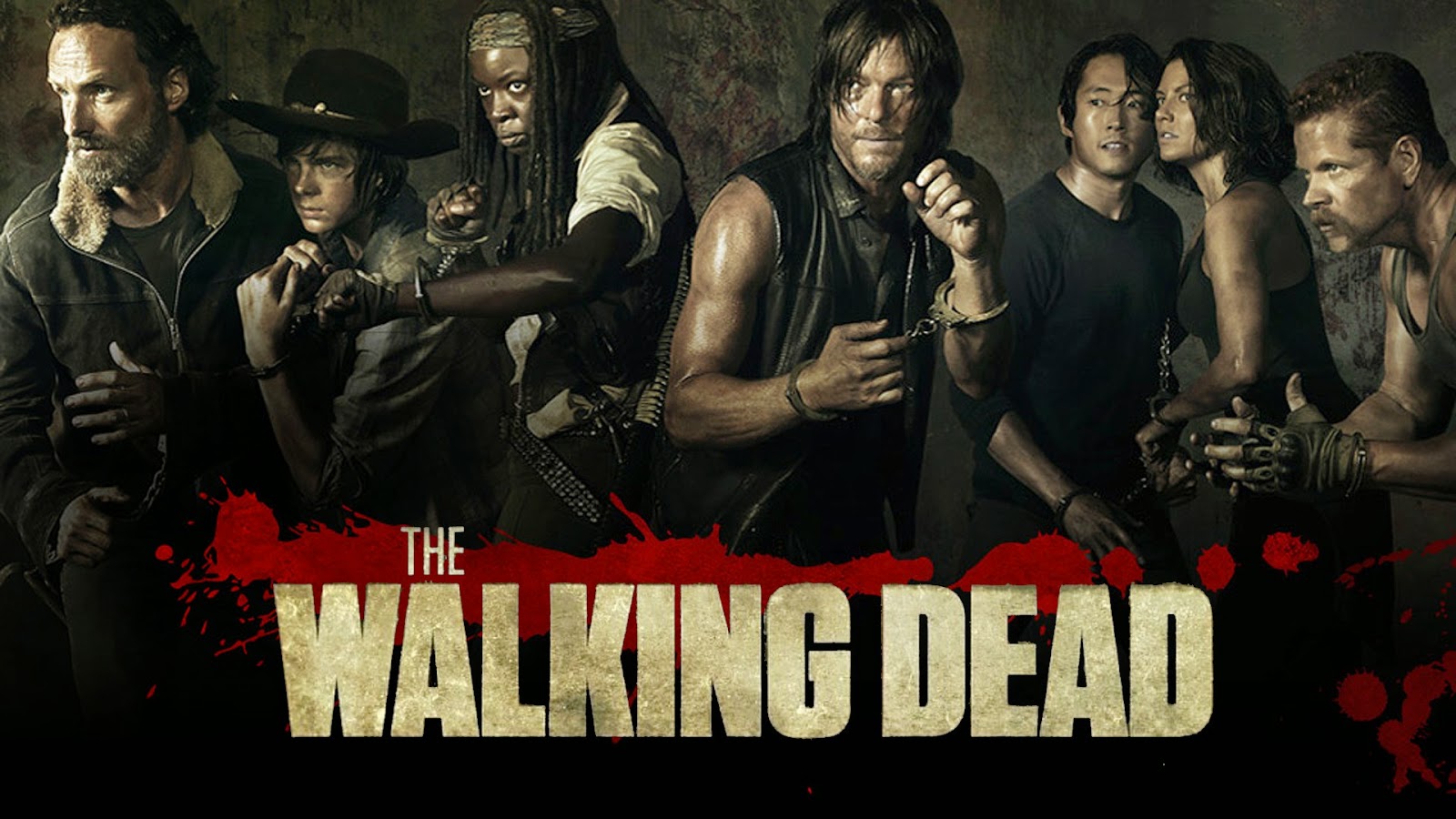 This episode opens up with a flashback of Carol being cast out by Rick.  Carol holds her head up and does not cry, until she finds herself alone on the side of the road in her car.  When a zombie batters on the window, Carol is forced to start the car up and drive on.  Carol finds what looks to be an abandoned law office and bunkers down for the night, reading a magazine by candlelight.  The next morning, she hangs a bag outside a window in an attempt to catch some water if it rains.  Carol however takes off when she sees smoke in the distance.  Clearly, Carol has returned to the prison to see it burning down.

In the present, Darryl and Carol drive and Darryl tells Carol about how he escaped the prison with Beth.  They continue to follow the car and Darryl comments that Rick is going to wonder where they went but Carol suggests running them off the road.  Darryl is not inclined to go that way because they have the advantage right now, adding that they can figure out who the people are and then do whatever is necessary to get Beth back. When the car stops, Darryl stops a distance away, watching.  Two people get out of the car and one is dressed as a cop. A zombie begins to bang on their window, which attracts the interest of the cop.  The cop stares for a few minutes, before getting back into the car and driving away.  Darryl moves to follow, only to discover that he is out of gas.  Darryl says that given the direction they drove, the group must be inside the city somewhere.  Carol suggests a place that she knows of and they take off walking, after killing the zombie which was banging on their window.

Carol and Darryl make their way through a dark building using torches.  It turns out that this is where Carol stayed temporarily, after Rick kicked her out of the group.  Carol offers to take first watch, saying that they should sleep.  Carol asks Darryl if he started over and Darryl replies that he is trying. Darryl asks Carol what is really on her mind and Carol replies that they don't get to save people anymore but she is trying.  They end up lying next to each other in bed, until they hear a thumping noise.  Darryl is quick to grab his crossbow and Carol a gun.  They begin to search the building and find an adult walker and a child walker.  Carol moves to kill the walker and Darryl holds her back, saying that she doesn't have to.

The next morning, Carol wakes up to see smoke in the window.  When Carol heads outside, she finds that Darryl has wrapped the walkers from the night before in sheets and is burning them.  Carol joins Darryl and thanks him, as the smoke rises.

We get a flashback to Carol digging a grave for Lizzie and looking up and seeing smoke in the horizon.


In the present Darryl and Carol pack up and decide to head downtown.  Atlanta looks like a graveyard, with its deserted streets and garbage strewn everywhere.  They come to an intersection littered with zombies, so Darryl sets a memo pad on fire and throws it in the direction of the zombies.  Carol and Darryl rush past, only pausing long enough for Darryl to use his cross bow to kill a stray walker.  They make their way through a parking garage and into yet another building. They find walkers trapped in sleeping bags and kill them one at a time, leaving several walkers behind in tents.

It's not long before they find themselves in what looks like an executive office, with a stunning view of the destroyed Atlanta.  Carol wonders how they got there and wonders why Darryl hasn't asked what happened after she met up with Tyreese and the girls.  Darryl points out that they have to start over.  In the distance, Darryl sees one of the vehicles he was following, calling it some kind of lead.  Carol fills up her canteen and Darryl snarks about the office costing a rich prick a lot of money. They load up and head out again.  This time, they come across Noah, who holds a gun to their heads, demanding that they drop their weapons.  Carol and Darryl comply, so Noah orders them to back up so that he can pick up Carol's gun.  Noah apologises to them and then frees two walkers  from tents to over his escape.  Carol moves to shoot Noah but Darryl stops her.  Carol tries to justify what she did, (read: her attempt to shoot Noah) saying that she left because she couldn't stand around watching people.

Quick flashback to the prison, with Carol watching it burn.

Carol and Darryl now walk on the same highway Rick used to enter Atlanta in season one.  They find the van hanging off a bridge. Darryl opens the back to check it out and Carol says that it's not stable and she is lighter but Darryl climbs in back anyway.  Carol starts to follow, after seeing a few zombies turn around the corner.  They continue to search and Carol notes that more zombies are headed their way.  Darryl finds a stretcher for the hospital and they climb out of the van, only to be surrounded. Carol fires her three shots off but there are too many zombies.  They climb back into the van and Darryl instructs Carol to put on her seatbelt and the van is then pushed off the bridge by the walkers landing on its wheels.  The air bag goes off but both Carol and Darryl survive.  With no sense of self preservation, the walkers dive off the bridge after them, only to land on the roof of the car.  Carol and Darryl stumble away together.

Later, Darryl offers Carol some water and she resists at first, insisting that she is fine.  Carol then shows Darryl her shoulder wound saying that she has had worse.  Carol wonders if they are going to find out what they need just by observing but Darryl is insistent that this is their best chance.   They enter a building and Darryl manages to get his hands on a cutlass.  Through a window, they observe the hospital.  Darryl asks what Carol means by saying he has changed and she simply replies that he was a kid before and now he is a man.  It seems the shelter Carol chose is where she stayed with Sophia before the apocalypse. Carol stayed in the shelter with Sophia for one day before returning to Ed and getting beaten yet again.   Carol says that at the prison she got to be who she always thought she should be and in exchange, Sophia died.

They head out when they hear a sound, only to discover a zombie with one of Darry's arrows through his throat.  They then hear gun shots and yet another walker appears, falling on top of Carol. Darryl takes it out and Carol is slow to get up.  Darryl keeps walking and this time, he finds Noah.  Darryl charges Noah and knocks the bookcase on top of him.  Darryl quickly retrieves their weapons and Noah starts to beg but Darryl makes it clear that he has already helped Noah once and won't do it again.  Darryl tells him to have fun with the zombie and starts to walk away but this time, it's Carol who stops.  Darryl points out that Carol almost died because of Noah and walks off, leaving Carol to kill the walker before it can eat Noah.

In yet another flashback, Carol wonders through the woods with a bloody poncho and what appears to be Darryl's crossbow.  In the background, gunshots can be heard and in the distance, smoke can be seen.

Darryl and Carol work to free Noah together and he thanks them.  Noah is limping now and Noah says that he has to go because the people at the hospital probably heard the shot.  Darryl asks if Noah saw a blonde girl there and Noah asks if he means Beth.  The three start to run but Noah falls to his knees because of his injuries.  Carol runs outside and she is hit by a car.  Noah holds Darryl back, saying that the people at the hospital will help Carol because they have medicine. Noah tells Darryl that they are the only ones who can save Carol but points out that they have a lot of people and weapons.  Noah swears that they can get Carol and Beth back.

Darryl and Noah sneak up on the hospital and in through the back gate together.  They manage to steal a truck and drive out of the city together.

This was a complex episode dubbed by fans as the Carol and Darryl episode.  This episode reminded us how close Carol and Darryl are and how well they work as a couple.  In many ways this episode was about transitions and dealing with the past.  For Carol it's her history as a domestic abuse survivors, finding her strength and what that strength eventually lead her to do.  For Darryl it's about finally reconciling with the fact that he as well is a survivor of abuse.

There were a lot of fires and smoke this episode.  Each time we saw smoke in the sky it represented some form of transition whether the change was forced or made by choice.  Neither Darryl or Carol want to go back to the way they used to be and at the same time, both are terrified of what they may become.  On one hand Carol is not happy to have to do something the things she has done, but she is unwilling to let anyone die on her watch.

So now we know who was in the bushes at the church when Darryl arrived back at the camp.  I cannot help but look at Noah and see dead man walking. We just lost Bob and now we have Noah. The Walking Dead has a nasty habit of killing off one Black man to quickly replace him with another.  Clearly there is a lot to Noah, which might allow him to last for a little bit but I don't expect him to have a very long lifespan.