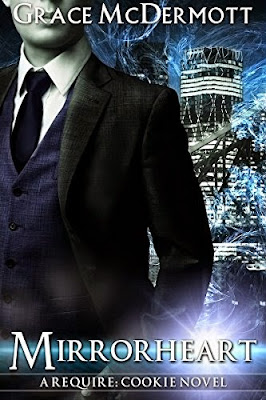 New recruit Stef died, on a mission she was grossly unqualified to be on all because Agent Ryan couldn’t say no to the surrogate daughter who just wanted to impress him. And now she’s dead

Unless he breaks one of the fundamental Agency Rules and makes a wish to bring her back. There’s only really one choice - and a desperate need to keep it secret

Which isn’t easy when his Agency gets audited - not for bringing Stef back but because Recruit Curt is outraged by how Stef was put at risk and how little Ryan seems to care...

The shifting point of view of this book is interesting - switching away from Spyder’s viewpoint  allows us a whole new angle to the world beyond her own.

In particular we see a lot more of Agent Ryan, his flaws and his limitations, those latter two being especially important. It’s easy to see Ryan as this perfect, calm, benevolent force because that is the image he presents to the world and he has done some truly beautiful, kind things.

But when we see him through the eyes of some of the people he has wronged or treated poorly we see a whole new angle. Then we get to see him through his own eyes and we see someone so very unsure, whose bad deeds come more from a deep lack of social graces and understanding and a constant sense of his own inadequacy backed with an almost fierce self-loathing
This really does make the short story Legacy far more relevant. By seeing Ryan’s views of his former self, Rhys, and how that affects him - how he holds his previous incarnation in contempt, even revulsion. How he fights not to follow in his former footsteps while at the same time constantly being judged by his predecessors standards. It’s an excellent shadow hanging over him. His internal conflict and the conflict between how everyone sees him and who he really is really stands out excellently

And is part of the theme of the whole book. We have Curt, the ex-Solstice recruit, so often hated by his fellow agents for his past and so torn over it. Frustrated and angry that he isn’t given the opportunities he should have, isn’t given a true place in the agency or treated as a member of the team by his fellow recruits. Yet at the same time he hates what he has done before and loathes the idea of returning to what he once was - his own self-loathing is as powerful as his disdain for his fellows. On top of that he has his own PTSD to deal with - the abuse he suffered at the hands of agents shadowing him and his actions.

Which brings us to Stef, conflicted and torn by her own mental illness, trying to think her way through it, escape the chains and traumas of her past and facing down her endless insecurity and how it drives her.
All these characters are conflicted, some living with different mental illnesses and all of them - perhaps most importantly - pursuing what they truly want and hope for. Despite the conflict, despite the mental illness, they all have their own wishes and hopes and goals and agendas they are willing to pursue.

The shifting point of view also allows us to see a lot more of the Agency, how it works and, again, fight a rather utopian impression we have had of it in the past. It is flawed, it has major issues and these are only just being explored and promises for some fascinating storylines in the future along with further building of the cosmology of his vast and complicated world.

These fascinating characters all work with the ongoing world and the general lack of what we might consider an overarching plot. There’s no mission for the agency, no major thing they have to do, just fall out from their own actions (and not even that much of that). It’s them finding their feet in the circumstances they’re in. Even Agent Ryan’s actions with Stef/Spyder are less about consequences and more with him coming to terms with them and, through them, becoming more grounded in his own agency. This is their story, their exploration and development and growth and I am glad that the story allowed us to focus on that rather than have some big dramatic event, separate from them, happen at the same time.

Two of the three main characters are non-neurotypical - and a decent argument can be made for Ryan as well except for his completely alien mindset. This is powerfully made clear in their mindsets and informs a lot of what they do, how they think and how they relate to the world. It’s an excellent depiction.

While the three main protagonist characters are cis, straight and white we do have diversity among some of the other major characters. Jane, the Agent investigating the agency is a Black woman and a lesbian. Magnolia, the combat Aide and a pretty major force in the agency is a bisexual woman. Jones is the tech head Agent and is gender fluid, assuming male and female forms depending on what they identify as on different days. These are not background cases, not overly troped (the one of note is Magnolia with her rota of lovers) but major participants in the plot line with their identities a part of their character. There’s also a real inclusion of minor diverse characters as well - they may only have shown up as bit mentions or background characters but there were different POC and LGBT people among them. I think this is always important to mention when a show has diverse main cast - that they don’t make them the ONLY diversity, that they are diverse people in a diverse world not just brief inclusion. This is something I really appreciate in a series

This book is an excellent addition to the series. It adds a wonderful level of depth and character development to the main players as well as several layers on top of the world they’re playing in. After the hugely vast and complex introduction, this reaffirmation is exactly what this series needed to ground us and set us up to truly explore this setting.