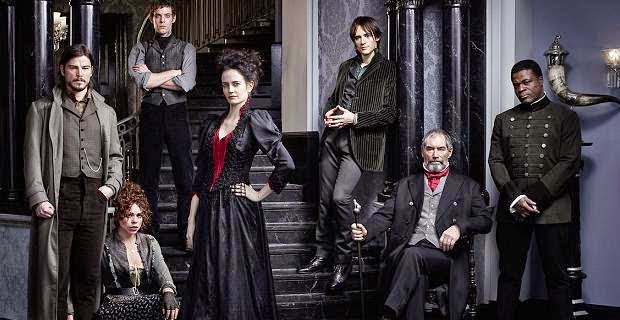 After the prayer showdown of last week, Vanessa spends some time cowering before going to tell
Malcom, all shaken and disturbed. She desperately seeks comfort from him and all he can offer is to be there with her.

They have a father/daughter moment. The next day Malcolm takes Vanessa to a project of his wife’s (he calls it his atonement and a something that brings him peace) – a large colony of people in London’s tunnels suffering from cholera. Malcolm remarks about the suffering while the city is so rich (including him – perhaps less money on expeditions, Malcolm?) and they sight see their way past all the destitute and sick to work on the soup kitchen which Malcolm funds

Frankenstein and Caliban have succeeded in resurrecting Dead!Brona. Having spent most of last episode groping her, they now try to talk to her. Frankenstein urges Caliban to be patient as she has to learn about the world first (is Brona’s mind completely gone?). Caliban is all about poetry. Frankenstein is all about practicality and wants to teach her first. Frankenstein refers back to Proteus – and how he began to remember before Caliban killed him. They have a bit of a “you’re evil!” “so are you!” moment. Victor goes back to groping before teaching her his name.

She picks up language quickly, though Victor told her she had an accident and is his cousin – as a part of that and imitating him she has completely lost her Irish accent. He also changes her name to Lily – which makes her inexplicably sad.

He continues to make up a history of the two of them, creating a fake childhood between them in rather eerie and creepy detail as he dyes her hair. He also tells her that Caliban was her fiancé – but he says he doesn’t know if she loved him or not. Brona/Lily says again who vulnerable and lost she is and begs Victor for protection “don’t let me hurt.”

Back to Frankenstein and Victor introduces “Lily” to “John Claire”.

Among the sick in the cholera camp, Vanessa finds Caliban and brings him soup. He’s very self-effacing and deferential in the face of her obvious class (contrast this sharply with his attitude towards Victor). She expresses her nervousness among the nuns with her difficult Catholic past and they have an excellent exchange “do you offer religion?” “do you require it?” “No” “then I shall not offer it.” She’s also not that sure she’s on speaking terms with the Almighty. He talks philosophy and poetry quite beautifully about morality and accountability to each other without the fear of god. He talks more about the world being enough for him in his classic, beautiful, eloquent fashion

As Vanessa leaves, she tells him he has beautiful eyes.

Malcolm goes shopping for a present for Vanessa and runs into Madame Kali – or Mrs Pool as Malcolm knows her as (secretly the evil head of the witches and not-so-secretly made of pure awesome) who decorously flirts with him while trying different perfumes before going all creepy and speaking odd languages – the verbis diablo. She doesn’t seem to remember it.

Malcolm, Ethan, Victor and Vanessa gather together as they’ve invited Professor Lyle, expert in dead languages, to visit. (Sembene, as always, is relegated to holding the coats). Yet more flirting with Lyle throwing more than a little innuendo Ethan’s way. He tells them about the Verbis diablo and the only example he knows of it written down in the British museum. He can get his hands on them (“like most of the plundered riches in the British museum, they are scrupulously ignored. I’ll just plunder them back”). He invites Ethan to bring his “guns” and accompany him. He also tells them that the monk who spoke the verbis diablo was considered possessed and burned at the stake, to Vanessa’s fear and Victor’s contempt at religion.

The next day Malcolm entertains Mrs Pool again, this time at target shooting – and she’s a crack shot (as is he, albeit less so). She asks after his wife and he tells her they’re estranged. Her response “should I pretend sorrow?” oh I like her. They won’t divorce but he does tell her there isn’t any love in his marriage and hasn’t been for some time. She appreciates his honesty – and it’s always good to have something to aim at. She says while hitting bullseye. I like her a lot

They return with the artefacts to Malcolm’s house – the monk wrote the verbis diablo on anything he could fine, even cutlery and crockery. Among all the junk they recognise languages –including Latin and Arabic.

But Lyle is spying for evil/awesome Mrs. Pool who is blackmailing him with exposure as a “sodomite” with indiscreet pictures if he doesn’t do what she wants. She wants Vanessa to find her (though why would Mrs. Pool refer to Vanessa as a “cunt”? Really? Why is this here?). One of Pool’s witchy minions returns with a baby she kidnapped from the tube (killing the parents). She kisses the witch as she takes the bag to her creepy room of dolls (behind a locked door). Surrounded by them, she cuts into the baby’s body while chanting the verbis diablo. She creates a doll with the baby’s heart inside – a doll that looks like Vanessa

Well that went a lot darker than I imagined.

In a hospital, the police investigating Ethan’s little werewolf rampage wait to speak to the only survivor – though he is horrendously mauled.

Dorian returns! At a café, Dorian pines over a picture of Vanessa when a woman approaches, Angelique, to flirt with him. She’s excellently witty and aggressive and forward – but Dorian refuses the invitation to her bedroom as Vanessa broke his heart.

Despite his original refusal, he visits her later (in an establishment that could be a club but also looks likely to be a brothel). Angelique removes her robe to show she has a penis.

Vanessa does shaken, broken, on the very edge of losing everything extremely well. No actor I have ever seen is as masterful at pulling off this driven to the edge portrayal. She is the very best scenery chewer in the business. No-one looks as haunted, as desperate, as vulnerable and as ragged as she.

But she can do more as well! Where is the woman who once stared down a vampire, who defeated a supernatural being with the power of her gaze alone? Let her be more than this terrible, haunted, damaged waif all tormented and broken and needing men to rescue and shelter her!

Especially when the second main female character is Brona/Lily who is entirely defined by utter vulnerability.

Here’s hoping there’s more Mrs. Pool. Or at least she takes them both under her wing and lets the awesomeness transfer. Yes she’s evil, but she’s also awesome.

I can understand atonement and charity – but framing it as a way for Vanessa to find peace with nameless wretches all around feels awfully self-serving – but I like that Vanessa openly admits that. And it is a different side to Malcolm and touches on some of the inequality of the time they’ve mentioned before.

I do like Victor and Caliban both bringing different lens on why they turned away from religion – from Caliban finding more than enough to be awed by in the world as it is (he doesn’t refuse it because he hates it but, as his nice exchange with Vanessa shows, he does not require it), and finding religion quite superfluous, to Victor’s scathing contempt for its cruelties.

While Angelique doesn’t use the terminology, within the confines of the time I think we can consider her a trans woman (there are other possibilities, again within the confines of the time and the legality of prostitution and homosexuality – but I think this is a depiction of a trans woman or intended to be) which is still incredibly rare on television. I am warily hopeful that she will become more of a character and we will see more of her. There are problems though – firstly the actor is apparently cis and there has been an ongoing problem of cis characters playing trans. Also a trans sex-worker (again, if that is a brothel) is a stereotype but also because of Reeve Carney’s damned interview which really does cast a pall over any LGBT related scene Dorian is involved in. This is exacerbated, yet again, with the actors talking about this role with Jonny Beauchamp saying show creator John Logan referred to this scene as “shock value.”

While Lyle is a terrible stereotype (and while there is a need to show a full spectrum of gay and bi characters, we can’t escape that the LISP is clearly running full tilt at the stereotype) the fact he flirts with Ethan and Ethan at least plays along is encouraging – it suggests that Ethan’s kiss with Dorian isn’t going to be one scene everyone then hastily moves on from and forgets. Also the banter was great fun. What isn’t discouraging is the blackmailed-over-sodomy storyline