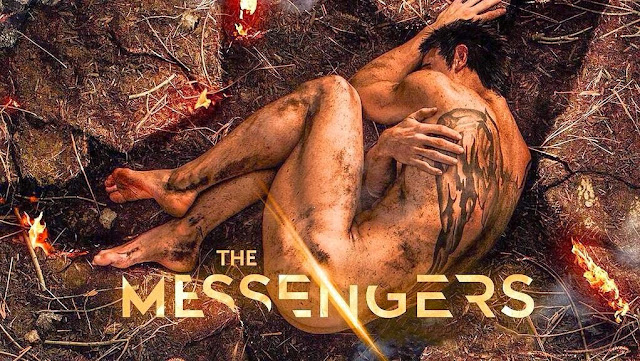 Raul and Rose are investigating Peter’s arrest from last episode. Raul doubts it can be true while Rose, always focused on the goal, doesn’t particularly care. Peter’s an angel, one of them and they need him if they want to stop either of their candidates for the Horseman of War. She goes to play reassuring mother hen to Joshua who reminds us how very bad the Horseman of War will be.

Vera, more sensibly, is testing their gifts. After she can’t get her spirit walking to kick in and tests Erin’s healing ability with a knife – which also doesn’t work, establishing that they don’t get to choose when to use their powers. Joshua doubles down on this by having one of his unpleasant visions causing him to spill his coffee (it was decaf, thereby proving what I’ve always said – decaf IS the substance of the devil). The vision has lots of death, broken chains, birds and his dad condemning him while another woman cries – and him having a sucking chest wound

Vera, rightly, points out how ridiculous it is that god can only communicate by Pictionary (I also kind of love how Joshua tells them all that he predicted his own death and everyone focuses on every element of the vision BUT that).

Vera also points out that Joshua’s visions may be related to his turbulent personal life – and brings up Joshua’s history of mental illness revealed by his father to discredit him. More strongly she also questions the legality of them meddling with a senator and a foreign president. Rose doesn’t have much time for her scepticism – demanding Vera prove that Joshua’s visions are false (yes, the old silliness of demanding doubters prove a negative! Get back to me when you’ve proved the invisible pink unicorn doesn’t exist.)

Nadia (Raul’s niece) is still being used to babysit Amy (Erin’s daughter) and is using social media to express her reservations of the group’s activities. This will not end well. Raul tries to talk to her about her dad’s death but she can’t even begin to deal with that pointing out how she has none of the usual trappings of death – gravestone, funeral – he’s just gone.

Not really being able to address that, he and Erin go on their mission with lots of him denying reading her mind though occasionally doing so and trying to make it look cute and flirty.

Alan finds Vera and wants to know what the hell is happening. She tells him nothing but still wants him to find their special rock they lost last episode.

To Joshua – he goes to see his sister (the woman crying in his vision) and he’s not exactly welcomed with open arms (this sister had also been kicked out by their pastor father and, at the time, Joshua hadn’t spoken up for her). It seems their dad disowned her (and her child that Joshua didn’t know about) because she is in a “deviant relationship” with another woman. He begs for her help, invoking siblinghood (which didn’t seem to mean all that much BEFORE he needed help). Still she helsp him talk through his issues his visions – and she asks whether he’s using drugs again. She gives some good advice and he gets another piece of his vision – pulling a bullet from his chest wound.

Over to Peter in prison remembering his suicide attempt – after his pending adoption fell apart when his soon-to-be-dad became unemployed, sending him back to a group home. In addition to making random enemies in gaol, he also meets his lawyer. Lucifer (or “the man” as he repeatedly appears in credits). He’s not great at reassuring Peter and encourages him to plead guilty and ignores his claims of self-defence (since Alice, the witness, is the one who turned him in) with added guilt for how killing someone has now permanently stained him and how he could never live with himself after that.

Words which hit the suicidal teenager hard and he makes a noose from his bedsheet. Rose visits before he can actually use it and recognises his description of his awful lawyer. She tries to reassure him but Peter has heard a lot of the same platitudes before

While he’s being transported back to Arkansas, with Rose harassing the bus along the way, Peter snaps and snaps his chains (snapping aided by enemy inmate who continually mutters threats at Peter). He forces the bus off the road and Rose comes to collect him while enemy inmate is making his apologies.

Vera goes to the energy summit where both the Afghan Prime minister and the US Senator (the two Horsemen candidates) are attending. She uses her spirit walking ability to spy on the prime minister and his wife (who are both, conveniently, speaking English) and all she learns is that Abdul is apparently a very earnest, good man who is desperate to bring peace and prosperity to his people before she is interrupted. Still having heard that she does call Rose to express her doubts about this guy being the horseman of minor scuffles let alone war.

Next step is Senator Richards through her chief of staff – alas her pitch is lacking and he’s already in Lucifer’s pocket anyway who is pressuring him to “finish the job”. Vera runs into Alan again who has finally drawn a line, he doesn’t share info on the special rock if she doesn’t spill what is actually happening.

Raul uses his undercover skills to get him and Erin fake IDs to enter the summit, though Erin is worried about them both being wanted fugitives. Inside the find the location of Joshua’s vision (well, a podium and some glasses which doesn’t exactly narrow down location). Erin does some snooping and hears that Senator Richards is also a super good nice person of niceness.

At this rate the Horseman of War is going to roar into battle yelling “HUGS AND KITTENS FOR EVERYONE!”

They have a little meeting and Joshua updates them on his vision – it’s of an assassination and either the Senator or the Prime Minister may be the target – and neither of them may be the Horseman.

Vera does some more spying and finds evil Chief of staff pushing Senator Richards to have the prime minister killed to drive his country into civil war and, therefore, prompt another American invasion of Afghanistan (which Senator Richards actually wants since her son died in Afghanistan). She runs to tell Erin (adding that their powers work when it’s urgently needed) to tell her what she heard.

As Erin is led away because her fake ID has been cracked, she figures out some more of the vision and sends a telepathic message to Raul that the shooter is on the security team. Peter and Rose arrives

And the senator lifts her glass (the signal to the shooter) and we get nifty CGI, she gains red glowing wings and her eyes go all evil while all the angel’s eyes dilate. I guess she just became the horseman of war – but Peter (shown the shooter by Raul) slams into the wall beneath the shooter, his super strength shaking the building and making him miss, hitting the senator’s glass instead. Everyone scatters and the prime minister is safe – but it’s too late; the first seal has been broken.

Afterwards, Erin questions why they didn’t succeed since they saved the prime minister but Rose explains the senator still made the decision to shoot him, still committed the sin. There’s nothing they can do about War now, only look for the next seal and the next horseman. Rose throws in some reassurance for Peter and reassuring the group that they did do something good by working together, saving a country from chaos and war.

Alan catches up with Vera again, demanding answers – she tells him about Michael and these people will help her find her son. Alan is back on side, though still worried about her.

Raul creates a grave marker for his brother which he shows to Nadia so they can grieve.

Senator Richard’s team manages to spin the whole assassination attempt as her saving the prime minister (and taking a bullet in the process) which fast tracks her into becoming the secretary of defence. She then murders her chief of staff, now dealing with Lucifer directly.

News reports that the Prime minister has also used the attempted assassination to bring peace to the country, something hailed as being like to spread peace throughout the world. A homeless lady with an abacus moves green and red beads around (this seems to have been +2 points to the good guys and +1 point to team evil). She also has a book full of notes and photos of the messengers.

I’m going to take issue with some of the opening voice over of this series “prove humanity is still worth saving”? Yeah I call shenanigans. Humanity is terrible – I don’t argue that. Humanity has done and continues to do some utterly appalling things and yes, there are times (after seeing a Daily Mail article or hearing that Katie Hopkins continues to say things) that I do think humanity probably should be wiped off the face of the Earth.

However, I call bullshit on the idea that humanity is especially bad NOW. After a history of such horrendous genocide and slavery and eras where there hasn’t been the slightest pretention of respect for human rights, the planet or anything else remotely decent in the world. Sure we’re far from perfect now, ye gods we’re far from perfect – but we’ve been a damn site worse than this.

Of course, we still do hear a lot of people declaring this the end times – but they usually do so because women aren’t bare foot, pregnant and chained to a cooking utensil, gay people have the audacity not to be corpses and POC are getting all “uppity” – so this whole idea that mankind is on the brink and needs to prove itself worth saving is BADLY in need of some reasonable exposition given the context in which we normally hear such things.

This is a problem with the show drawing on apocalyptic, “end times” imagery and language – the context of when that language appears in the real world is one that is highly discriminatory and marginalising. You need to work hard if you’re going to use language normally associated with people who say things like feminism “encourages women to leave their husbands, kill their children, practice witchcraft, destroy capitalism and become lesbians” and not have any of that splash on you

I did like Nadia’s comment about death – the lack of the normal cultural mainstays of closure can be jarring it was nice to see that addressed.

Joshua has a lesbian or bisexual sister who he shunned – but he goes to her when HE needs something? I’m going to need a lot more from this character before I’m happy about this. At very least, I’d like t see her in a future episode.

Rose, despite in many ways assuming an almost leadership position of the group, does so in a way that is heavily trope lade. She is Mammy to Joshua and Peter and their fragility and doubts or she is the Mystical Wise Black women dispensing wisdom and guidance to others, especially the doubting Vera. Even then none of that power and wisdom is hers because, more than any character except, maybe, Joshua she constantly references god in terms of both the mission and their abilities. While being the leader, she almost has the least agency since she is a conduit or puppet for deity more than a person with their own history/backstory/characterisation/life/goals. This is especially telling in that, unlike every other messenger, she has little back story or connections outside of their mission.