iZombie and Playing with Identities 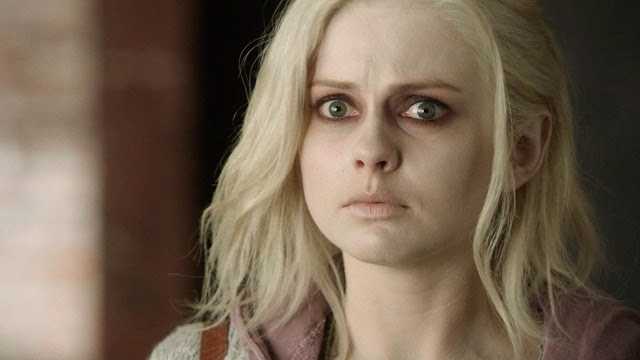 At Fangs for the Fantasy one problem we often come across is the Dreaded Fanpoodle. Some fans are unable to accept or tolerate any criticism of their precious. We have often railed against the fanpoodle. We have often fought the fandpoodle. We are not impressed by fanpoodly ways.


With this in mind I am going to criticise iZombie even though a not-insignificant part of me has just surged upwards screaming “HOW VERY DARE YOU?!” at the very idea. But I suppress my inner-fandpoodle and how much I absolutely adore this show to point out some problems.


And there are several problems (quiet inner fanpoodle, there are!), including the borrowing of major and severe issues and marginalised identities extremely shallowly and without a great deal of respect


One of the central premises of iZombie is that zombie Liv and her fellow undead eat brains and relive the experiences of their snack which is great for visions and murder investigation but it also temporarily changes their personalities - and allows them and the writers to play with certain life experiences as Liv finds herself absorbing, among others, a paranoid Asian gangster, an overweight agoraphobic, a possibly bisexual Latino man, an alcoholic, a man with PTSD and Lowell eats the brain of a gay man.


The problem with all of these depictions is how utterly shallowly they were treated. After all, Liv is trying on this identity for the space of a few days and the scope of a single episode, which has to be conveyed to us quickly and heavily to show a distinct personality change. The easiest and laziest way to do this is through blatant stereotyping…


So the Asian gangster gives Liv kung fu. The fat man makes Liv crave unhealthy food. The Latino man is overwhelmingly sensual. The mother makes Liv comically nurturing even the cheerleader is a classic stereotype (almost, amusingly, after Ravi rejects Liv’s stereotyping). They are reduced to one-note and often exaggerated caricatures of identity so the writers can clumsily and unsubtly hammer us over the heads with the personality changes they foist on Liv.


This is a repeated problem with any depictions of marginalised characters, too often they are underdeveloped tokens who are reduced to avatars of their marginalisation (or their marginalisation as perceived by people who don’t share it), with these stereotypes played on to remove the need for development and to really hammer home the “inclusion” to the audience. Liv almost serves as a token by proxy - not in an attempt to introduce minority characters but in the way she is used to try and sum up these characters with brief, broad tropes that is very similar to how tokens are characterised.


There is also a problem with this show being highly minimising with the issues it raises, especially in relation to mental illness. When Liv eats the brain of an agoraphobic who literally cannot leave his house (which, in turn, would have strong related themes for his diet and exercise) it is treated as an irritation and brief nuisance and used as part of her characterisation with Lowell, in that she can tell him why she can’t leave the house rather than having to come up with an excuse. It’s a minor quirk of the week, a brief annoyance that we know will pass by the end of the episode. The one time she has to leave she takes some pills and has some quirky, amusing side effects for us to laugh at. This is much the same as when she eats the paranoid man, the PTSD sufferer and the alcoholic.


It’s a brief annoyance for Liv, a quirky character moment that adds a new angle to the episode, taxes the actresses skills a little and generally adding a few amusing sprinkles before fading away without any real analysis or problems. Even within the brief time the show grants, there’s little attempt to really examine these conditions that Liv suffers from is briefly and amusingly inconvenienced by. There’s no nuance or examination of her meal’s life. or how they must have lived, or what this ailment even means - and we’re not talking minor things here. Alcoholism completely destroys lives, PTSD destroys families and can quite literally be a living hell to live with, agoraphobia can leave someone stranded, helpless and utterly isolated; they even had the victim die and not be found for some time because he was so alone but there’s no examination of that. It’s shallow, it’s disrespectful and it’s appropriative. By all means examine these conditions and certainly include characters who live with them - but don’t borrow them for a week’s whacky hijinks, completely ignore any real depth and then cast them off when the next shiny personality comes along.


Emphasising these problems with all of this is the nature of the show - it’s quirky. It’s zany. It’s a little silly and it’s both fun and funny. And while I can giggle along with Liv and Ravi quipping back and forth (they have the best dialogue), when the joke becomes “lol Lowell’s gay now!” or “fat brained Liv eats doughnuts!” or “look at alcoholic Liv get drunk!” then I become much more uncomfortable. This show has only brief hints at possible LGBT people - but will make Lowell gay for an episode for whacky hijinks. This show has no regularly appearing (alive) mentally ill characters, but will snack on them so we can laugh at their conditions. These are erased marginalised characters on this show - but their issues are being invoked for the sake of a cheap laugh.


By having Liv experience these lives through proxy, it’s almost like we’re being given the distance and the permission to laugh at these conditions and these people. I would like to think that there would be a general aversion to laughing at the side effects of pills that would allow an agoraphobic to finally leave their home (I would like to, but if there’s one thing working on Fangs have taught me, it’s how very very terrible people can be). But by letting Liv be the source of this humour she provides the space that allows people who would normally refrain to laugh at these jokes. People who would draw the line about laughing at Liv’s last meal feel more comfortable with exactly the same jokes with Liv as the buffer.


It’s not that we disagree with the concept. Far from it - they have shown a lot of potential for how they can work with it - with Liv having major character development when she embraces one of her friend’s love of life and impetuousness, or when she connects with her mother through the motherhood brains - these are excellent moments and show a lot of potential for character growth as she takes something new from each experience. Or there’s the chilling moment when she ate the brain of the assassin, or how she came to terms with the cruelty to Ravi another brain pushed on her. Even the hunt for new experiences through the brains or Lowell’s devastating realisation of what they are and what they are actually eating were excellents moments. All of these scenes were incredible, powerful and have vast potential to be fascinating, engaging and, yes, funny and amusing.


If iZombie did more of these excellent character growing moments then I would be much more able to listen to my inner fanpoodle and sing its praises. But these making jokes and playing games with these marginalised experiences are not something I can ignore, much as I sometimes wish I could.