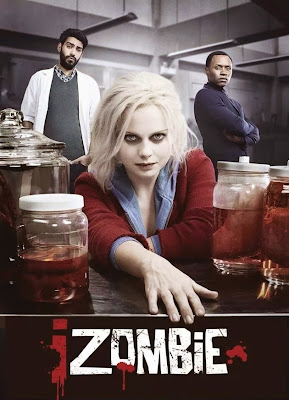 This has been pretty much me since last week. Of course this week they will make it all better and bring him back from the dead. Right?

Liv is being interviewed about Lowell’s death (nooooo) with the cop obviously suspicious about her being on scene so quickly. Clive has to tell Ravi that Liv is a suspect. But Ravi can’t hold Liv’s hand because Clive needs him to go talk to Major after last week he reported killing a man with an apparently disappearing body (not knowing about zombies).

The devastated Liv gets a reprieve from Lieutenant Suzuki instead, covering up for Blaine he insists Lowell’s death was a text book suicide and shuts down the questioning.

That doesn’t save Major from Ravi questioning him and not being too thrilled about Major buying guns off the street. Major rambles on about how nothing makes sense while Ravi keeps looking disapproving before telling him what happened with Liv

And to work the next day where Liv is still devastated. It’s looking increasingly like a resurrected Lowell isn’t going to happen. Apart from anything sleep, she needs to eat, she needs a brain without PTSD because the last thing she needs is to keep re-living Lowell’s death. Ravi confirms that Suzuki is covering up Lowell’s death, revealing Blaine’s power but Liv is unwilling to exposition because she can’t deal right now. She wants to work. And eat

Bring on Rebecca Hinson, today’s corpse, alcoholic, reported – and the woman who was working with Major and had a slight chance of possibly, just possibly, being an actual female character beyond Liv on this show. Alas she has been downgraded to lunch. Liv isn’t particularly worried about getting drunk at this stage – which may be a plus – and she finds this death waaaay too convenient.

But there’s some hard truth – Ravi wants to go along with the cover up and call Lowell’s death a suicide. Anyone going after Blaine will be in danger because they can’t warn the police what Blaine is – and if Blaine does end up in prison without brains that’s a whole other problem, to say nothing of exposure. And the potential contagious biohazard represented by Lowell’s zombie body – poor Liv looks so broken over this.

She looks for a drink – and has a flashback of Rebecca’s death and her killer apparently taking her fingerprint to unlock her phone. She comes out of the vision to find Clive admiring her brainy meal – she tells Clive she wants in on the case when he asks and recounts her first vision.

To her editor who tells them a) she was always late and b) she was investigating a guy call Jason, a college kid who “snapped” and earned the moniker “library killer”.  Unfortunately it’s not finished yet so they don’t have her work or her source – just a notebook, written in code.

They do get one name, a Ryan Fisher one of Jason’s classmates and go interview him (as someone who went to law school I shouldn’t find the crack about sketchy d-bags funny but I laughed anyway). Time to question him and Liv get all journalisty. They don’t learn much from him beyond the fact he’s an arsehole but Liv does get a vision of a passing woman who argued with Rebecca.

We also have an insight into Rebecca – she focuses intensely on her project and is very lone-wolf… but if her project isn’t sufficiently all consuming she turns to booze. And so does Liv.

Having worked through a bottle she then drunkenly follows the woman when she finally emerges. The woman is not helpful. But Liv isn’t a very nice drunk.

She does come in to talk the next day about how Jason and Ryan didn’t get on so they decided a great prank to play on Jason would be to make him think he’d killed a woman and blacked out… I… wish I could say this sounds too ridiculous to be believable, but it doesn’t. She believes that it was thinking he was a murderer that drove Jason to, well, become a murderer. She also believes that Ryan would definitely kill to keep it secret. Liv asks for a rewind to check is Jason, in a secure mental hospital, still thinks he killed the woman… apparently yes

So they go tell him that he’s innocent of at least one of his murders, but also learn that he was a major consumer of Max Rager – the drink that keeps coming up which maaaaaaay cause psychosis. Which would give Max Rager executives a big reason to silence Rebecca before she connects their drinks to a spree killer. Not good marketing. Clive is quick to insist Liv actually investigate rather than just leaping on her first hunch.

Clive tries to investigate Julian Dupont but it all falls apart when it’s clear that a) Julian is not dead nor full of bullets and b) Major’s very unsubtle investigations of Julian do kind of make him look like an obsessed stalker. Points for “looks like he fell out of a Nicholas Sparks movie”.

He then confronts Major and points out the man he shot is alive and working out in the gym. Clive is blunt – what Major thinks happens didn’t happen and if he believes it did then there’s a problem. He mentions sectioning Major. He tells Major to get help before help is forced on him.

The next day, Ravi realises Major is packing to check himself into a mental hospital. Ravi tries to convince him he’s fine but Major is actually very sensible – his story is a classic example of paranoid delusion with added hallucinations.

Ravi goes to Liv and insists Major has to be told the big zombie secret – he nearly died at Julian’s hands and he could easily have been scratched and zombified. And Ravi is horrified that their deception is effectively driving Major into a mental hospital though Liv counters that Major’s actions simply believing Julian is killing kids are already extreme and risky – so how much further will he go if he knows the truth? In the mental hospital he will be safe.

Despite that, when Liv goes and gets super drunk, it’s Major she calls for a lift home and who puts her to bed and rubs her back and is all super nice.

Time for some more fun of going to work and Ravi taunting Liv with zombie rat, of course. And Clive has more evidence of people drinking Max Rager and then becoming all violent. And among Rebecca’s research is the boat party where Liv was infected. Of course the sensible thing would be for Liv to follow Clive’s advice and be careful and slow

Instead she storms into Vaughn’s, the CEO of Max Rager, office. She rages at him but, of course, has no evidence. Clive is not amused, especially not when it’s clear she’s drunk. Clive and Ravi, together, send Liv home.

Back to her bar where the bartender pours her a Max Rager courtesy of a guy called Sebastien, Rebecca’s source. And he wants help before he gets murdered as well, yet his story of his history with Vaughn involves a whole lot of nasty, pointless sexism which is just kind of boggling – sorry you think a company is going to kill you but decide to talk about women you wanted to have sex with? He reveals Rebecca had another source as well

Pouring over her notes reveals the second source, Vaughn’s secretary, Adele, who is not impressed by Liv one little bit and she runs. Sensible woman. Liv chases her – and both of them end up knocked out, kidnapped and taken to a boat for easy body disposal which is where Liv wakes up. The assassin is Sebastian which at least somewhat explains his creepiness – as he throws the dead Adele into the water with a breezeblock tied to her feet.

Liv realises she has her own breezeblock and Sebastien decides to up the creepy and Liv goes all zombie on him. Breezeblocks make good weapons when you have zombie strength. But not as good as boat propellers. Oooh that’s gotta be nasty.

Liv returns to Ravi to tell him the news, hand over her booze and agree that, yes, it’s best Lowell’s death be ruled a suicide. She also tells him everything that happened that night and how her inability to kill Blaine led to Blaine killing Lowell. She grieves and Ravi holds her.You

Major has checked into the hospital and is in a group session telling his story. His story is heard by fellow patient Scott E who seems to know about zombies

And twist, creepy Sebastian drank Liv’s blood before trying to drown her in order to be extra creepy. He now comes to shore alive. Or undead.

It is looking like Lowell is not coming back – and Liv’s devastating is so utterly perfectly acted. They sold it well and I miss him a lot. Well done show, you managed to sell grief – with added bonus of Ravi and Liv.

The difficult questions of what to do with Lowell’s death and Major on the cusp of the secret are also really good – because they’re very real conflicts with a whole lot of idealism running aground on the harsh rocks of practical realities. I like that, I like these conflicts with the very clear RIGHT thing to do hitting the very clear SENSIBLE thing to do and butting badly against each other

But we have problems. Problem 1 – WOMEN! Again, as I said last episode, Liv lives in a very very very male world. Rebecca was one of the few women who had the potential to be a character on this show… and she’s now dead. Liv just lost her love interest and while Ravi is there to comfort her, where’s Peyton? Where is she generally? Where are the women!?

iZombie has also used several mental illness brains to add quirkiness to Liv as well as alcoholism. Sadly, quirkiness is the key here. There’s no real analysis of it, there’s no depth, no analysis and no characterisation. They’re cute little quirks that will make Liv all quirky and a bit silly for this episode before we move on to the next quirky fun trait – and now we throw in a mental institution which is, again, just a place inflicted on the poor neurotypical character. Not good iZombie.