Orphan Black, Season 3, Episode 5: Scarred by Many Past Frustrations 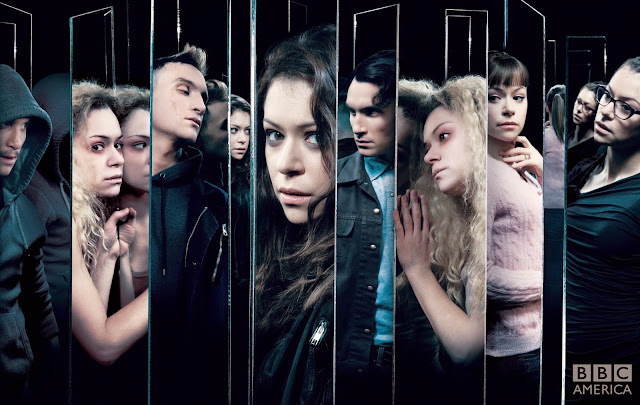 Helena (who still doesn’t have mangoes) is now chained and beaten. Her scorpion disapproves of her compassion. She cuts her own back again – back to self-harming. I just want to hug Helena (figuratively anyway, because no way would I get within arm’s reach).

While the scorpion goes into the next cell, where Sarah has been taken.

Rudy (scar-faced-castor-clone), Virginia (Mother) and a scientist are all kind of thrilled with the Johannson baby clone body they can use to hopefully patch their broken DNA, but equally wary of Paul coming back and finding they’ve imprisoned Sarah. Since Rudy is an arsehole, Virginia sends him away for a little while so as not to make a bad situation worse.

Sarah awakes in her cell and panics until she hears Helena in the neighbouring cell through a grate. Helena is angry, thinking Sarah betrayed her and had her captured (it was Mrs. S). Sarah tries to appeal but Pupok the hallucination Scorpion (GAAAAAAAAAH I hate that thing) tells Helena to say nothing and Helena agrees. Sarah tries to talk to Helena, but it’s hard because she keeps arguing about butter with Pupok

The guards arrive to take Sarah (as an interesting side note, Helena knows their schedule to the second) and as she’s taken, Sarah yells that the Castor clones are their brothers. This means something to Helena and she starts to work to escape again. She seems to have several escape methods in progress.

Sarah is taken to Virginia who has her doctor take samples from Sarah. She tells Sarah she’s not someone she can fight. Oh I doubt that. When Sarah is returned to her cell to try and repeat Virginia’s words that Helena is happy to be locked up, Helena drops cryptic clues about having a way out.

Virginia goes to speak to Mark who is recovering from various wounds and asks lots of questions about how he basically went native and tried to betray them all. Mark has… not especially great excuses. Virginia’s willing to let it go so long as he dishes all the nifty intel.

Paul arrives at the base and tries to make nice to Sarah. Sarah is not feeling friendly. Helena’s commentary doesn’t help especially when Sarah makes it clear Paul was the one who sold Helena out. Paul tries to argue he’s just trying to protect these men – though Sarah counters he’s protecting them by letting them abduct and assault women. Paul tries to throw up Helena’s lack of innocence (but that hardly applies – Paul is outright aiding and abetting the Castor crimes, unlike Sarah trying to rescue Helena). She appeals to him to let them go – of course he doesn’t. Paul tries to sell her some bullshit about the military being a family just set up to help her genetic siblings and Sarah openly mocks his shaky reasoning and Helena throws Parsons in Paul’s face – the Castor clone who begged her to kill him.

Paul goes to Virginia, quite angry that the evil deceitful doctor is evil and deceitful. She feeds him some self-serving bullshit with an added claim that Parsons was totally in agreement with what they did to him, which we know isn’t true.

Sarah keeps trying to get Helena to help her escape and Helena happily asks if Sarah wants to be her sandwich – because she’s weak and Helena will eat her if necessary. Yup, Helena is not happy. Sarah pulls out a story of when she left Kira with Mrs. S which is full of pain and angst and meaning and again reminds us all that Tatiana Maslany is the Goddess of all things thespian which reaches Helena.

So escape plan – first Sarah gets in a scrap with a guard and sent to doctor-Hippocratic-oath-doesn’t-apply-to-me giving her chance to return with metal tools.

With that, handcuffs, her previous preparations and a whole lot of butter, Helena escapes, happily killing a guard much to Sarah’s horror. And then she leaves Sarah behind - Helena holds grudges.

She sneaks through the night dark compound, past the guards and out – but, much to Pupok’s disgust, her conscience kicks in at leaving Sarah behind. The alarms go up, her escape has been noticed.

Paul looks at Parson’s body and looks kind of angsty and torn as well as through a little black book (Parson’s? Rudy’s? Rudy had one like this and Virginia asked Mark to make one) full of descriptions of women

Cosima is on a date (set up by Felix, of course, it’s not like he has his own life) with a woman called Shay whose taste in hats is as unfortunate as her name. There is definite chemistry. Cute nervous babbly chemistry. Shay is also into a whole lot of woo-woo which I don’t see making for long term balance with Cosima. For added problems, someone is photographing them creepily from a distance (let it go Delphine). Cosima invites Shay home (well, to Felix’s home anyway).

Back at his place there are massages and more chemistry and Shay is wonderfully patient and understanding, offering Cosima space or a chance to talk about her break up and generally being really good. They kiss.

Over to Art who is concerned that Sarah hasn’t checked in and he gets a visit from Grace – Sarah told her to come to Art if she needed help. Grace vaguely tells him what happened – but apparently tells Art that she’s still pregnant. His idea of help is to take her to a shelter (wise), but is clearly not what she’s expecting: she tells him about the miscarriage.

Art decides against a shelter and instead takes Grace to Mrs. S and Felix. Felix is not a fan of this, not wanting to take on religious cult deprogramming . Art insists that he can’t help Grace because she needs a friend (what, and Felix is automatically a friend to all straight ladies in distress everywhere? She needs a counsellor. That shelter wouldn’t have been a bad idea). Since Mrs. S is also having guilty issues, Felix is drafted to play GBF to yet another woman.

Starting with a new outfit and Grace totally assuring him that despite being from a fundamentalist Christian cult she’s totally not homophobic, honest (after Felix tells her he sleeps with men – not recently you haven’t Felix, you don’t have time between being a GBF to all and sundry)

Mrs. S shares her story of early marriage, widowhood and self-destructive impulses from her own youth, Felix overhears all this (seemingly for the first time). Afterwards Felix asks Mrs. S about it – and why she never shared that story with the kids she raised. And Grace comes downstairs wearing some of Sarah’s more daring clothes and planning to go out and party (with what money, hon?) Mrs. S expects Felix to intervene before this disaster hits the streets

They have cocktails music and dancing at home, instead. It’s all going well until she collapses in agony. They call the paramedics who find that Grace’s eyes are terribly bloodshot.

Art, meanwhile, meets with the woman Rudy and Seth attacked. She has terrible blood shot eyes, she’s sick and the doctors don’t know what caused it

I am glad to see Cosima’s story move on, but at the same time I’m kind of leery that the best way to show Cosima dealing with the fallout of breaking up with Delphine is to see her dating again. Maybe it would help if there had been some sense of time scale, if say, Felix had said she’d been holed up inside with ice cream and moping for a month or two, it would help. As it stands it feels like Delphine and Cosima broke up yesterday and Delphine’s trolling the net for dates the next morning – which doesn’t really do much to respect or elevate the relationship Cosima and Delphine had.

So Felix has Sarah’s issues, Allison’s issues, Mr. S’s guilt and angst, Cosima’s love life – and now Grace’s issues on his roster. Are sassy gay friends rationed in Toronto or something? Is it actually possible for him to have 5 seconds of his life that ISN’T dedicated to the comfort and service of a woman, predominantly straight at that? Adding yet another to the roster isn’t helping this. And I don’t buy the idea of taking a girl raised in an ultra fundamentalist Christian cult and making her non-homophobic – it reminds me of Teen Wolf’s weak and inconsistent excuse of a non-homophobic world. They remove homophobia because including it would involve more development – and, in this case, create a barrier between Felix playing GBF yet again.

Tatiana Maslany is not only an acting mutant but she has amazing courage. She touches that scorpion with her NOSE. A scorpion, that close! I had to pause it and go take a shower. Aaaaaargh

Please don’t even try to sell me Paul’s redemption and his bullshit double standards. He has worked for Dyad, he has worked for Virginia – his idea of “helping” the clones has always be to climb in bed with the forces attacking them, experimenting on them, kidnapping, torturing and killing them. Are all the clones innocent? No, but Sarah has always tried to extract them from the forces pushing them towards these bad decisions and situations, trying to get Helena away from her handlers and the prolethians, trying to get Cosima a cure and free of Dyad – she’s all been about saving the clones not helping those attacking them in the vague hope they’ll go easy.

Castor clones have a lethal STIs – so the response is to encourage them to sleep with many women to collect data? This is… badly in need of some explanation

Sadly, it says everything about Alison’s storyline that this week’s episode was much smoother without it.